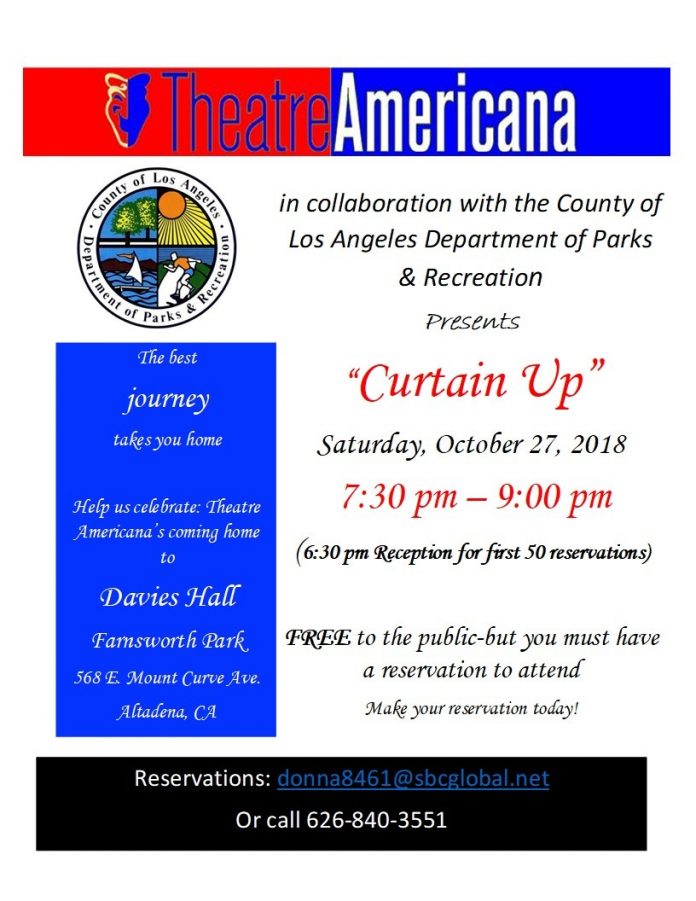 Theatre Americana, one of the oldest theatre companies in the United States, presents Curtain Up – a homecoming celebration of Theatre Americana’s return to Davies Hall in Altadena California.

Curtain Up is a collaboration between Los Angeles County Parks and Recreation and Theatre Americana to herald their return back to Davies Hall. The event will include song and dance numbers performed by members and guests of Theatre Americana featuring some of the most popular Broadway composers.

Theatre Americana President, Donna Scarantino, tells us they will be honoring many recognizable Broadway composers and musical classics that have been favorites of their audiences. “What our actors love most is the energy and appreciation the audience delivers throughout the performance,” she says, and goes on to explain her passion for Theatre Americana, “what better way to explore your acting opportunities and fulfill your dreams of being on stage than to be part of this 85-year legacy. We love what our predecessors built; it’s like they handed us the baton and we’ve taken off with it.”

This evening promises to deliver an unforgettable theatre experience on the stage that was built for Theatre Americana in a building that houses the memories of an 85-year legacy. Become a part of this historical event- Make your reservation today!

Theatre Americana was formed in the 1930s by funds set aside from President and Mrs. Roosevelt to provide job opportunities for performing artists. Mrs. Ruth Thurber, a very dedicated advocate who spearheaded the building of Davies Hall for Theatre Americana was president of Theatre Americana for many years. Furnishings weren’t included in the WPA project but William D. Davies, President of the Altadena Improvement Association for whom the building was named, generously loaned $4,000 for the furnishings, and other equipment was donated by Altadena Women’s Circle, Altadena Women’s Club and other individuals.

Throughout Theatre Americana’s golden years, activities included the production of hundreds of plays and oversight of playwriting contests. Theatre Americana played host to numerous indoor and outdoor performances dating back to the 1930s at the historical Farnsworth Park amphitheater and Davies Hall.  Peter the Great was the first play to premiere at this venue on April 22, 1934. Zane Gray provided the money for the lighting of this very first production. Currently, Theatre Americana continues to thrive by producing original work by local artists, and by providing a low cost musical theatre experience to audiences of all ages. Theatre Americana has been a grant recipient from the L.A. Commission for the Arts, and the Pasadena Tournament of Roses, and a six-year recipient of the Pasadena ARTNIGHT grant. Visit Theatre Americana at www.theatreamericana.com. 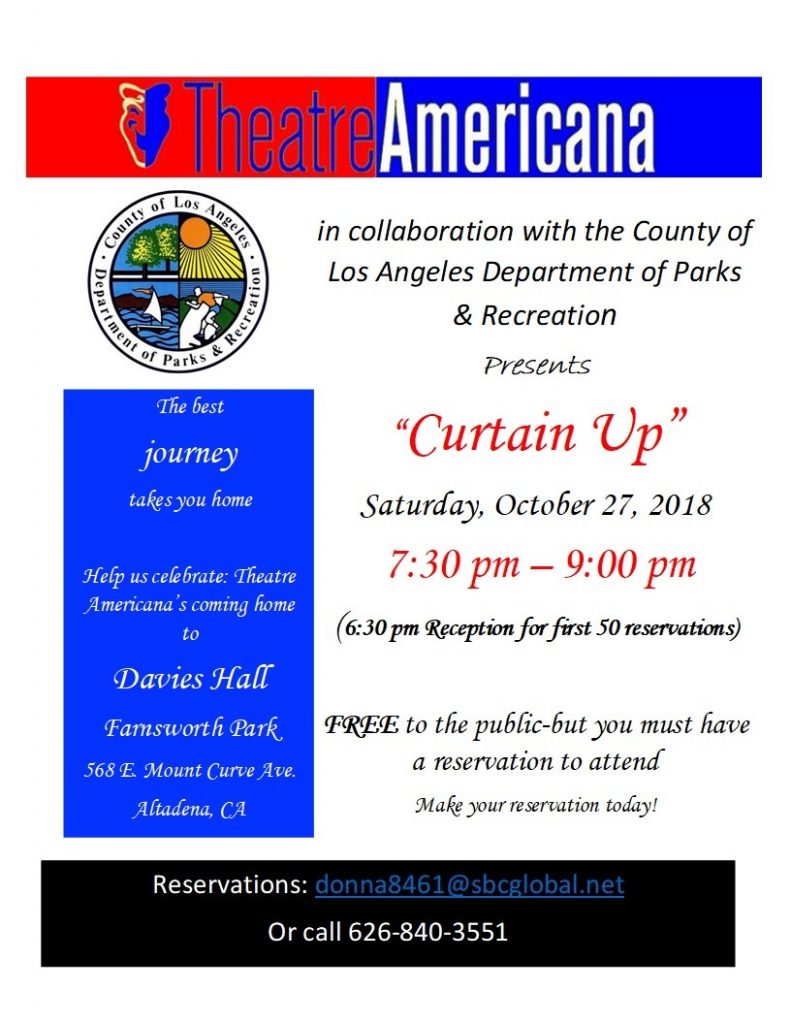