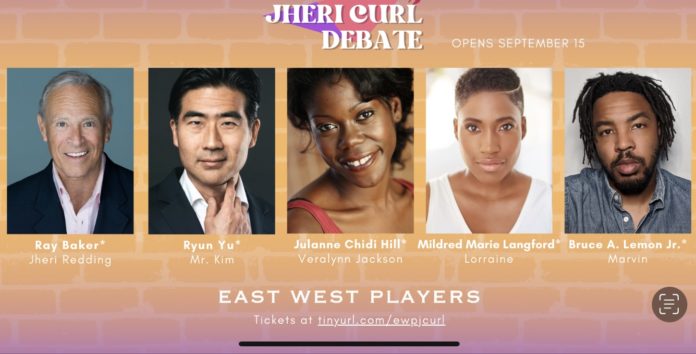 ​Veralynn Jackson knows hair, her neighborhood, and that the invention of the Jheri Curl marks the end of the world. When she takes a job in Mr. Kim’s Korean-owned Black beauty supply store and the posters start talking to her, Veralynn might finally come to know her true calling. South Side Chicago meets South Korea in this heartfelt play where a business partnership and a touch of magical realism bring these two unlikely friends closer to understanding themselves and each other.

“The Great Jheri Curl Debate” is written by Inda Craig-Galván, an award-winning writer, exploring intra-racial conflicts and politics within the African-American community through plays and television. Her works a hit dog will holler (Skylight Theatre & Playwrights’ Arena co-production), Black Super Hero Magic Mama (Geffen Playhouse) and I Go Somewhere Else (Playwrights’ Arena) have been produced throughout Los Angeles. The Great Jheri Curl Debate was developed in the East West Players’ Playwrights Group and was a finalist for the 44th annual Bay Area Playwrights Festival.

“East West Players is thrilled to see a play developed in our Playwrights Group make its world-premiere on the David Henry Hwang Theater stage,” shares East West Players producing artistic director Snehal Desai. “Inda is a prolific playwright who writes with heart and an intoxicating, hypnotic theatrical flair. Along with The Great Jheri Curl Debate, East West Players will be presenting two other productions this fall that center on the conversation between the Black and Asian communities (The Brothers Paranormal by Prince Gomolvilas and When Yuri Met Malcom by Rosie Narasaki). We hope you will join us on this road trip from Chicago to New Orleans to Berkeley. Together these works are an inspiring trio that demonstrate the power, strength, and solidarity that arises when we take the time to listen to each other’s stories.”

The cast of The Great Jheri Curl Debate comprises Julanne Chidi Hill (Fences, The Search for Signs of Intelligent Life in the Universe: Revisited, ABC’s Black-ish) as Veralynn Jackson, Ryun Yu (Hold These Truths, The Language Archive, Netflix’s Fuller House) as Mr. Kim, Ray Baker (Are You Now or Have You Ever Been?, Bent, Total Recall) as Jheri Redding, Mildred Marie Langford (Intimate Apparel, Native Son, The Crucible, Amazon’s BOSCH) as Lorraine, and Bruce A. Lemon Jr. (What Happens Next, Sundance short film Hallelujah) as Marvin.

All performances of The Great Jheri Curl Debate are presented at the David Henry Hwang Theater at the Union Center of the Arts at 120 Judge John Aiso Street, Los Angeles, CA 90012 in Little Tokyo. The Great Jheri Curl Debate performs September 15 through October 9. A press night will be held Saturday September 17, with opening night occurring Sunday September 18. Performance times Thursday, Friday, Saturday, and Monday are at 8pm, with additional 2 PM matinees on Saturday and 5pm performances on Sunday. Ticket prices range from $40 to $60. A Pay-What-You-Can performance is scheduled for Monday, September 26 at 8PM.

Tickets may be purchased online at eastwestplayers.org or by calling (213) 625-7000. At time of purchase please mention any wheelchair/accessible seating needs. Student, senior, and group discounts are available. Dates, details, and ticket prices are subject to change.

All patrons must show proof of vaccination and photo ID to be admitted into the theater. EWP has implemented numerous COVID-19 safety protocols to ensure that artists and audience members are able to safely enjoy their experience.