“NEGATIVE SPACE” is Directed by Max Porter & Ru Kuwahata, Based on a poem by Ron Koertge and Produced by Ikki Films & Manuel Cam StudioDU. 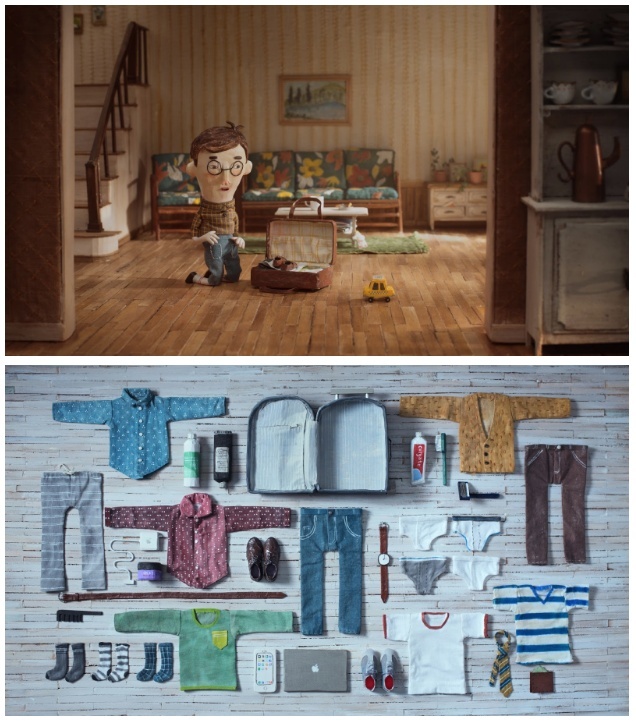 “Negative Space” is a short animated film that depicts a father-and-son relationship through the act of packing a suitcase. Based on a 150-word prose poem by Ron Koertge, the adaptation by co-directors, Max Porter and Ru Kuwahata, is a 5-min film using handmade stop-motion animation to bring visual metaphor and subtext to the original words.

When reading Ron Koertge’s text, Ru Kuwahata, connected with the characters on a deeply, personal level. As an airline pilot, Ru’s father traveled often when she was growing up and one of the most vivid images of her childhood is her father’s packing list pinned to the wall of his study. Max and Ru mined their own childhood memories of specific objects, textures and banal routines to portray the small things that make up a large part of life.

Max and Ru have made short animated films together in the United States for over a decade and had long admired France’s appreciation for animation as an artform. After the initial development of “Negative Space,” they submitted a project proposal to the CICLIC Animation Center, a production residency located in Vendôme, France. Later, they teamed up with French animation production company, IKKI FILMS, and co-producer, Manuel Cam Studio, to realize the project over a nine-month period. The entire “Negative Space” team brought their artistry and passion into the compact narrative. Living and working in four different locations in France during the production, Max and Ru became professional packers.

Max Porter and Ru Kuwahata are a filmmaking duo based in Providence, USA. Collaborating for over a decade as “Tiny Inventions”, they have directed short films, TV commercials, music videos and comics. Produced by Ikki Films and Manuel Cam Studio in France, “Negative Space” is their fourth professional film. They’re currently in pre-production for their first animated feature, “Dandelion Seed.”

-Funding has been made possible by Puffin Foundation Ltd.

Negative Space has been supported in production by Ciclic-Région Centre Val de Loire, in association with the CNC. It has benefited of the support for original music creation by the SACEM in association with Ciclic. It has been hosted in Vendôme (France) from June 2nd to September 2nd, 2016, and from December 1st to January 31st, 2017. Ciclic is a public institution for cultural cooperation created by the Centre-Val de Loire Region and the French State. www.ciclic.fr.

To date, “Negative Space” has won 127 prizes (including 63 Grand Prix/Best Animated Short awards) and played in over 314 festivals.