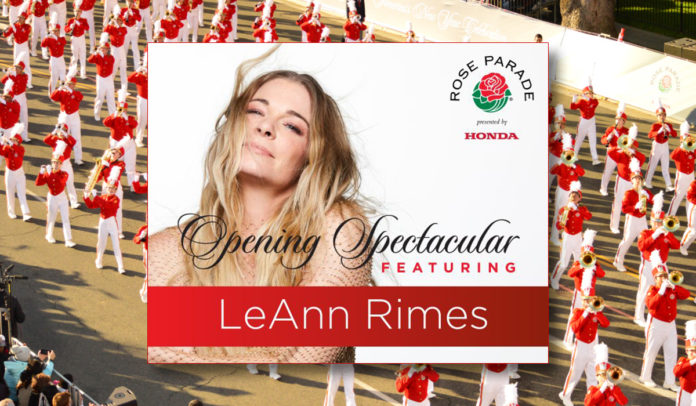 The Pasadena Tournament of Roses® announces that it will kick off the 133rd Rose Parade presented by Honda with a special performance by LeAnn Rimes. The Opening Spectacular will feature a re-mixed and re-mastered song created especially for the 2022 Rose Parade titled, “Throw My Arms Around the World.”

Rimes, who first appeared in the Rose Parade in 2006, will be accompanied by the Rose Parade Dancers, the Mark Keppel Dance Company, Rose Parade Flag Bearers and four drummers. The powerful performance will end in fireworks and set the stage for the exciting two-hour parade featuring stunning floral floats, and talented marching bands and equestrian units from across the country.

Now celebrating her 25th anniversary as a recording artist, commemorating the release of her debut album “Blue,” and dreaming about the future release of her next studio album, “God’s Work”, in early 2022, LeAnn Rimes will once again kick off the new year with the Pasadena Tournament of Roses family.

Passionate about using her voice to help heal the world, LeAnn released a chant record in November of 2020 called CHANT: The Human & The Holy. Rimes continues her wellness journey while embodying the Rose Parade theme, “Dream. Believe. Achieve.”, with two seasons of her iHeartRadio podcast, Wholly Human, which brings her lifestyle blog, Soul of EverLe, to life and introduces fans to the teachers and wise souls that have made a positive impact on her life. LeAnn is currently serving as the inspiration judge on the discovery+ competition series, Meet Your Makers Showdown, which started streaming this past November.

For millions of viewers around the world, the Rose Parade is an iconic New Year’s Day tradition. Join us on Saturday, January 1, 2022, to experience the floats, bands and equestrians as they parade down Colorado Blvd.

The Tournament of Roses is a volunteer organization that hosts America’s New Year Celebration® with the Rose Parade® presented by Honda, the Rose Bowl Game® and a variety of accompanying events. The Association’s 935 volunteer members supply more than 80,000 hours of human power, which will drive the success of the 133rd Rose Parade, themed “Dream. Believe. Achieve.,” on Saturday, January 1, 2022, followed by the 108th Rose Bowl Game.  For more information, visit www.tournamentofroses.com. Like us on Facebook and follow us on Twitter, Instagram and YouTube.