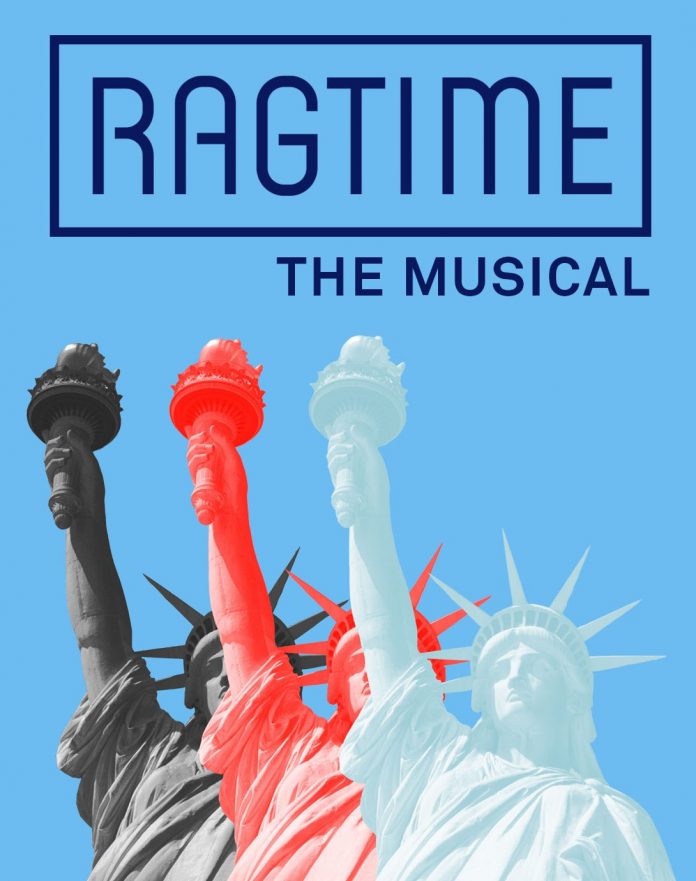 Pasadena Playhouse, the State Theater of California, will transform the historic theater with an all new version of Ragtime: The Musical as it returns to Los Angeles more than two decades after its premiere at the Shubert Theatre.  With 21 actors and a 16-piece orchestra, this is one of the most ambitious productions in the Playhouse’s recent history.

Danny Feldman, Pasadena Playhouse Producing Artistic Director said, “We’re thrilled to be producing one of the largest-scale projects in our history. Not only have we assembled a veritable fleet of actors, designers and musicians to bring this musical to life, with visionary director David Lee at the helm, but we are pleased that this production will employ over 100 LA-based theatre artists. This local production, created for our theatre, of Ragtime: The Musical will be a landmark theatrical event for Los Angeles once again.”

Based on the novel Ragtime by E. L. Doctorow, Ragtime: The Musical is written by Terrence McNally, and composed by Stephen Flaherty with lyrics by Lynn Ahrens.  This production is directed by David Lee with choreography by Mark Esposito and musical direction by Darryl Archibald.

The cast of Ragtime: The Musical is led by Clifton Duncan (Broadway’s The Play That Goes Wrong, Off-Broadway’s Carmen Jones) as Coalhouse and Shannon Warne (Guinevere in Camelot at Pasadena Playhouse, directed by David Lee; Baz Luhrmann’s La Boheme at the Ahmanson Theatre, Ovation recipient) as Mother. The production also stars Bryce Charles (The Book of Mormon national tour, Blues in the Night at Wallis Annenberg Center) as Sarah and Marc Ginsburg (Ovation nominee: Che in Evita at Cabrillo Music Theatre’s, and Aaron in First Date at La Mirada/McCoy Rigby Entertainment’s) as Tateh.

About Ragtime: The Musical

Nominated for 13 Tony Awards including Best Musical, Ragtime: The Musical tells the story of three families at the turn of the 20th Century in pursuit of the American dream.  The award-winning score uses ragtime rhythms to paint a portrait of the people who built this country with the hopes for a brighter tomorrow.

E.L. Doctorow’s famous and popular novel became the basis of one of the most revered musicals of the modern age. Ragtime: The Musical begins with an unforgettable sweeping, nine-minute opening number in which all strata of society of the early twentieth century are introduced: immigrant Jews in their ghetto, successful rich Protestants, and African Americans.

The fictional characters – pianist Coalhouse Walker Jr., his child’s mother Sarah – who has become part of a respected family headed by the white Father and Mother – and a Latvian immigrant Tateh, are eventually joined by a parade of historic figures — Evelyn Nesbit, Booker T. Washington, J. P. Morgan, Henry Ford, Stanford White, Admiral Peary, Matthew Henson, Emma Goldman and even Harry Houdini – in this much appreciated and well-remembered musical.

Director David Lee said, “The themes of the show are more relevant than ever.  Set in the first years of the 20th Century, it deals with immigration, racism, white privilege, women’s’ rights, workers’ rights, violence in the name of justice, media’s outsize influence on our democracy, inter-sectional politics and even the clash between fact and fiction in reporting our history.

It was written in the last years of the 20th century to remind us that those elements of the earlier American experiment were still being wrestled with, and offer some clarity and hope of survival for our country and its promise.

And now, 20 years later, we are dealing with the same themes.  I’m passionate about the piece, not only because I believe it is masterful, but because I don’t feel I’m alone in needing clarity and a whiff of hope.”

In Conversation: Race, Identity and Ragtime

To further explore the themes at the core of Ragtime and to look at the real American experience in the 100+ years following the musical, In Conversation: Race, Identity, and Ragtime will be presented on January 28 and February 11 at 7:00pm.  These talks are free to the public.

The first talk, entitled The Jewish Experience in America, is presented in partnership with The Jewish Federation of San Gabriel & Pomona Valley, and will be held at The Pasadena Jewish Temple and Center, located at 1434 N. Altadena Drive, Pasadena, 91107 on January 28 at 7:00pm.  The discussion will focus on the impact of Jewish Americans past and present on civic engagement, interfaith relations, cultural influence and community building. Panelists will include Bruce A. Phillips, Professor at Hebrew Union College and Brie Jeanette Loskota, Executive Director of the Center for Religion & Civic Culture at USC.

The second talk, entitled Till We Reach That Day: The Struggle for Justice in America will be held at Pasadena Playhouse on February 11 at 7:00pm and will explore he journey of Black Americans from slavery through today, and the countless movements, efforts, struggles and successes that have shaped the American experience.  Panelists will include Tyree A. Boyd-Pates, History Curator and Program Manager at California African-American Museum and Funmilola Fagbamila, adjunct professor of Pan African Studies at California State University, Los Angeles.

ABOUT THE PASADENA PLAYHOUSE

The Pasadena Playhouse is a place where people have gathered for 100 years to experience bold and important theater.  It is one of the most prolific theaters in American history with a legacy of profound theatrical impact and courageous new work. In 1937, the Playhouse was officially recognized as the State Theater of California for its contribution and commitment to the dramatic arts. Today it continues that tradition of excellence under the helm of producing artistic director Danny Feldman. Dedicated to enriching lives through theater, community programs and learning initiatives, Pasadena Playhouse is a living force in the community.