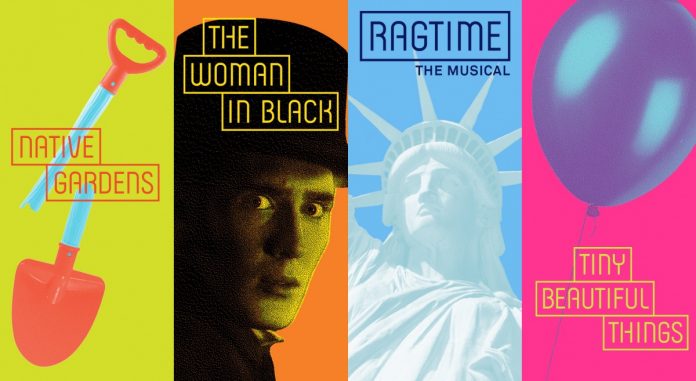 The Los Angeles return of Ragtime

West End production of The Woman in Black,

The first of these shows is the new comedy Native Gardens (September 5-30, 2018) by Karen Zacarias and directed by Jason Alexander, that received rave reviews in its first productions at the Guthrie Theatre in Minneapolis and Washington D.C.’s Arena Stage.  It tells the story of an attorney on the rise and his very pregnant wife who couldn’t feel more welcomed by their new neighbors.  But when a friendly disagreement about the lay of the land escalates into a backyard brawl, cultures collide and mudslinging ensues … literally.

The London hit thriller The Woman in Black (October 17 to November 11) by Susan Hill, adapted by Stephen Mallatratt and directed by Robin Herford, comes to Pasadena just in time for Halloween.  A ghost story, Woman in Black is one of the most popular theatre works ever produced — over 7 million have seen the show during its astounding 28 year run in London’s West End.  It is produced by PW Productions.

A new production of the great American musical Ragtime plays February 6 to March 3, 2019 and is directed by David Lee (at Pasadena Playhouse Casa Valentina, Do I Hear a Waltz?, 110 in the Shade, Camelot, Can Can).  Nominated for 13 Tony Awards, including best musical, Ragtime had its United States premiere in Los Angeles two decades ago.  Playwright Terrence McNally, composer Stephen Flaherty, and lyricist Lynn Ahrens adapted it from the book by E.L. Doctorow, whom President Obama said was one of “America’s greatest novelists.”  The musical mixes its fictional characters with a parade of historic figures including Evelyn Nesbit, Booker T. Washington, J. P. Morgan, Henry Ford, Stanford White, Polar explorer Robert Peary, Emma Goldman and Harry Houdini.

The touching Tiny Beautiful Things, taking the stage in Spring 2019 (dates to be announced), is based on the New York Times bestseller Tiny Beautiful Things: Advice on Love and Life from Dear Sugar by Cheryl Strayed. (Strayed is also the author of Wild: From Lost to Found on the Pacific Crest Trail, which was the first selection of Oprah’s Book Club 2.0; the film version starred Reese Witherspoon, Laura Dern, and Thomas Sadoski, star of the Pasadena Playhouse production of Belleville. ) The stage version of Tiny Beautiful Things is adapted by actress and writer Nia Vardalos (Academy Award nominee My Big Fat Greek Wedding) and comes to life as a richly funny, uniquely uplifting and moving play.  It is about reaching when you’re stuck, healing when you’re broken and finding the courage to take on the questions, which have no answers.  This stage version was conceived by former Wall Street Journal columnist Marshall Heyman, Thomas Kail (director of Hamilton), and Vardalos.

An additional production will join the 2018/2019 season in late spring 2019 and will be announced in the coming months.

These productions join Bordertown Now (May 30 to June 24), featuring Culture Clash – Richard Montoya, Ric Salinas, and Herbert Siguenza, and Jungle Book, a family entertainment by Craig Francis and Rick Miller from Kidoons/WYRD Productions of Montréal Canada (July 17 to 29).  In addition, the Playhouse welcomes all community members to attend their free Centennial Block Party on June 9, 2018, from noon to 10 p.m.

“Our 2018/2019 Season includes a wide range of experiences including a hilarious new comedy, a classic ghost story, a great American musical, and an incredibly moving new play,” said Feldman. “These four shows that will entertain and thrill our audiences are theater at its best.”

“We’re excited to be bringing back the beloved musical Ragtime in its first major LA production since its Los Angeles premiere over 20 years ago. Jason Alexander joins us in his Playhouse directorial debut as we bring to the stage an exciting voice in the American theater, Karen Zacarias. In addition, Tiny Beautiful Things, the inspirational and poignant adaptation of the bestselling book adapted by Nia Vardalos makes its LA premiere. And while the classic ghost story, The Woman in Black, has kept West End audiences on the edge of their seats for the past 28 years, this celebrated classic production will be coming to the United States for the first time ever, and it will be on our stage at the perfect time: Halloween. It is going to be a season of great nights at the theater.”

The Playhouse Membership Program, a new model of theater subscription, is the best way to see all season productions and experience everything the theater has to offer while supporting the theater and our outreach programs. With a Membership to the Playhouse, patrons simply purchase their package, then book their tickets throughout the year before they go on sale to the general public. They can choose when they want to attend and where they want to sit, and never be charged for tickets to season productions!

For a full list of benefits and to see how it works, visit pasadenaplayhouse.org/membership, or call 626 356 7529

On June 9 from 12-noon to 10pm, the Pasadena Playhouse invites everyone to join thousands of guests in celebration of its centennial with a free block party on El Molino, in partnership with the Playhouse District Association. This family-friendly event features music, food, libations, guided tours, a kids’ zone, and much, much more. With interactive art and live performances from local arts organizations and community partners, the Playhouse Block Party will kick off the next 100 years in style!

This all day event for all ages, begins at noon when the focus will be on family activities, food, and fun, with entertainment on a kids stage in the Playhouse Courtyard. In late afternoon/early evening, the focus will shift to a “street party” feel with live music and bands, food, drink, and fun.  Community Partners will be engaged to provide entertainment throughout the day. They will also be encouraged to participate through interactive booths. The public will also have the unique ability to take behind-the-scenes tours of the historic Pasadena Playhouse.