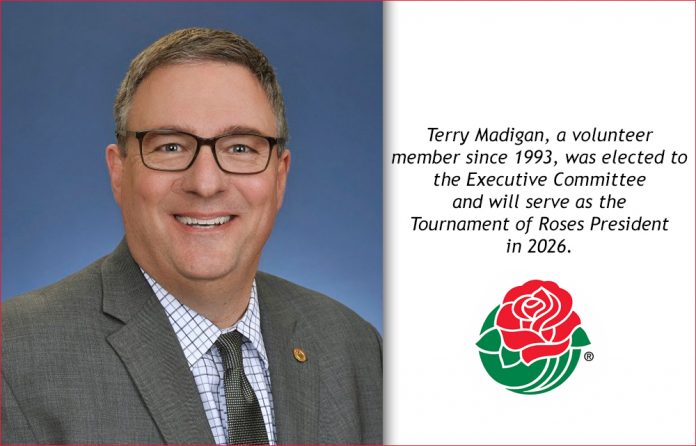 South Pasadena resident Terry Madigan, a volunteer member since 1993, was elected to the Executive Committee and will serve as the Tournament of Roses President in 2026.  He will provide leadership for the 137th Rose Parade® and the 112th Rose Bowl Game on January 1, 2026.

Madigan was appointed a Tournament of Roses Chair in 2010 and a Director in 2013.  He has served as Committee Chair for Host, Judging, Parade Operations, and Special Events. Madigan has been Vice Chair for Float Entries and Post Parade and a committee member of Community Relations, Decorating Places, Equestrian, Formation, Parade Operations, Post Parade, and TV/Radio.

Professionally, Madigan is a Certified Personal Chef and owner of Just No Thyme®, a personal chef service serving Pasadena and the San Gabriel Valley. Before turning his passion for cooking into a full-time profession, he had a career in marketing and communications.

In addition to his many years of service in the Tournament of Roses, Madigan is a member of the United States Personal Chef Association (USPCA), serving as a founding member of the Southern California Chapter where he served as President from 2012 to 2015 and organized the USPCA’s 2014 National Conference in Long Beach, CA.  He also served as President of the Business Network International (BNI) Rose Bowl Chapter.

Madigan is a sixth-generation native Californian and grew up in the San Gabriel Valley. While attending South Pasadena High School, he drove the South Pasadena float in the Rose Parade, twice.  Terry graduated with a bachelor of arts degree in political science and journalism from the University of Southern California and later graduated from the California School of Culinary Arts with a Diplôme in Le Cordon Bleu Culinary Arts. Terry resides in South Pasadena with his husband, Kevin Sommerfield.

In addition, the following officers were elected to serve with Terry on the 14-member Executive Committee: Laura Farber, executive vice president; Robert B. Miller, treasurer; Amy Wainscott, secretary. Lance Tibbet, president of the 2018 Tournament of Roses, serves as past president.

Re-elected to the Executive Committee as vice presidents are Alex Aghajanian, Ed Morales and Mark Leavens.  The five appointed at-large members are Zareh Baghdassarian, Teresa Chaure, James Jones, Janet Makonda and Herman Quispe. Freeny also announced the election of a new member to the Tournament of Roses board of directors, Ernesto Cardenas.

Lots To Love About “YOU I LIKE: A Musical Celebration of Jerry Herman”