Souza will be accompanied by Otmaro Ruiz, a Venezuelan pianist of great note. The dynamic pair will take the stage at 6:30 pm in the beautiful Library Community Room at 1115 El Centro Street.

The doors for the free concert will open at 3 p.m. and no tickets or reservations are necessary. They will be preceded by acclaimed jazz/world songstress Julia Vari from 4 to 5 p.m. and the David Plenn Band from 5:15 to 6:15 p.m. Seating is limited and “festival style” (first come, first seated).

Souza, a Grammy Award winner, is one of the leading lights of contemporary jazz. Her style is rooted in the Bossa Nova, which took the popular music world by storm in the 1960s.

Souza grew up in São Paulo, Brazil in a family of innovative musicians. Luciana’s work as a performer transcends traditional boundaries and her seamless blending of musical forms fuses jazz with the diverse influences of world music.

She began her recording career at age three with a radio commercial, and recorded more than 200 jingles and soundtracks, becoming a first-call studio veteran by age 16. Since 2002, Souza has been releasing highly regarded recordings around the globe – including her six Grammy-nominated albums. Luciana’s initial Universal recording, “The New Bossa Nova,” was accorded enthusiastic critical acclaim. Of her 2015 release, “Speaking in Tongues,” The New York Times exclaimed: “Luciana Souza has used her voice as an instrument of empathy and intimacy, cultural linkage and poetic disquisition…singing wordlessly but with full expressive intent.”

Souza has performed and recorded with luminaries including Herbie Hancock (on his Grammy winning record, “River: The Joni Letters”), Paul Simon, James Taylor, Bobby McFerrin, Maria Schneider,  and many others. Her complete discography contains more than sixty records as a side singer.

Click here for more information about the Eclectic Music Festival

For more information on the performances at the Carnegie Stage, please call the Library at 626 403-7350.

This article was written and produced by Steve Fjeldsted, Director of the South Pasadena Public Library 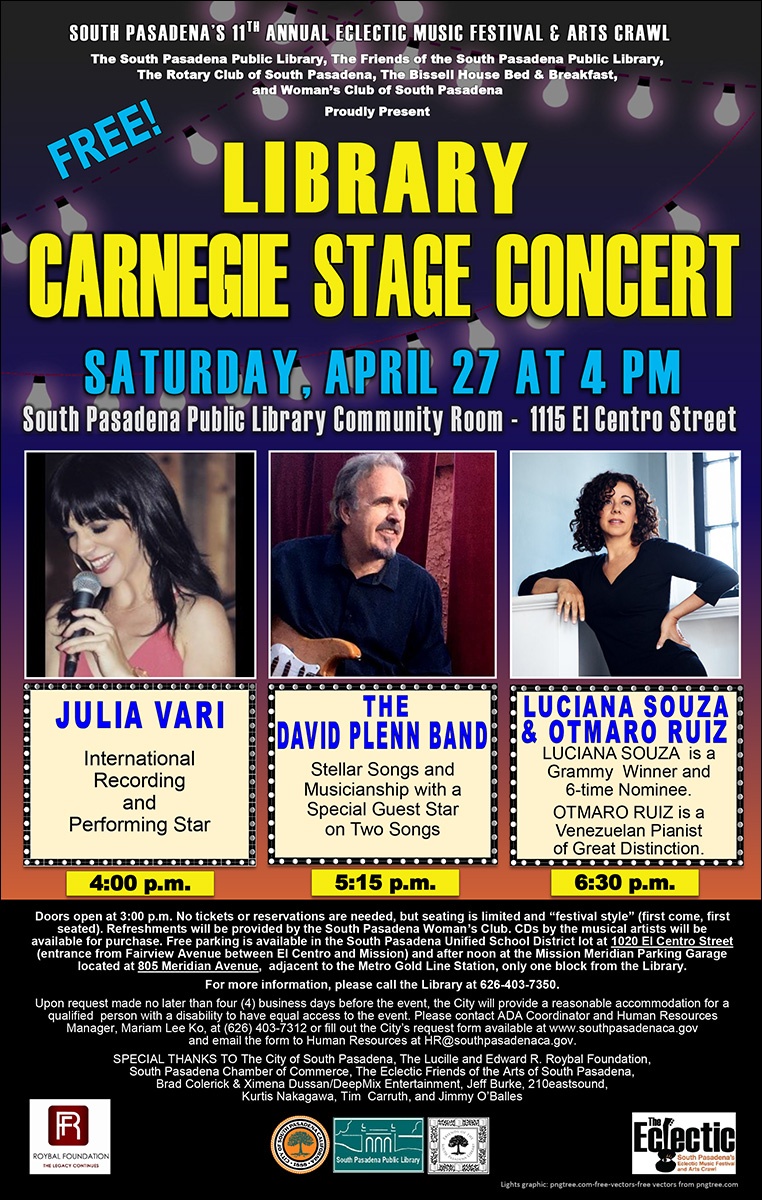