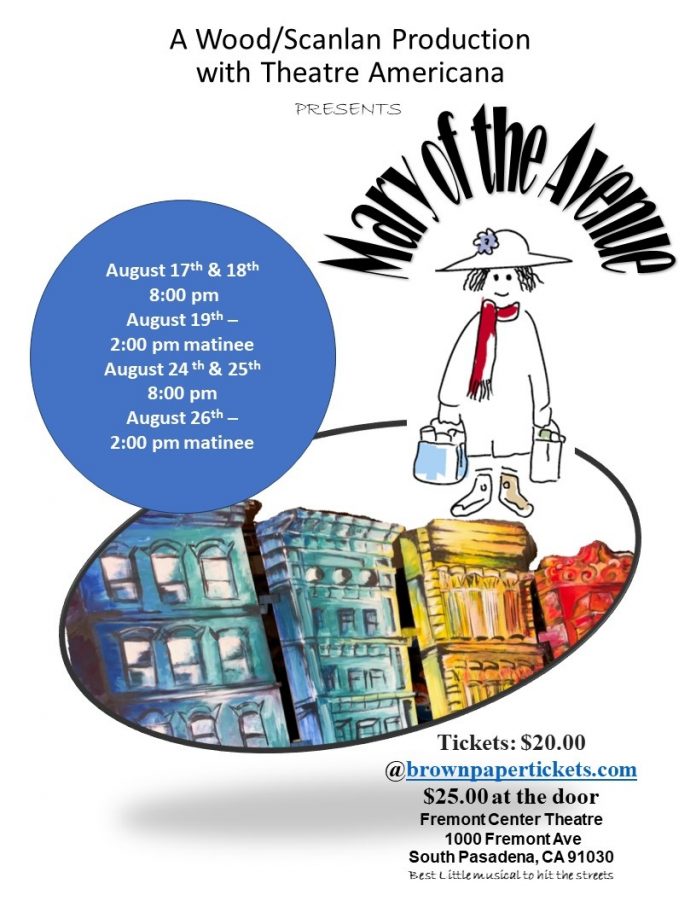 Theatre Americana, one of the oldest theatre companies in the United States, presents an original musical at the Fremont Center Theatre in South Pasadena, and is set to open August 17.

Mary of the Avenue, an original musical written by Greg Wood and Neil Scanlan made its debut at the Stella Adler theatre in Hollywood in 2013, and The Hollywood Fringe Festival in 2015. The story is about Carrie, a young woman who is in search of her long-lost mother.

Carrie believes her mother, Mary, is living on the streets in New York City and she takes to the streets to find her.  Carrie meets some of Mary’s cronies, who become endearing caricatures, and whose fate rests upon the antics of an arrogant town mayor.

This original story is depicted in a lighthearted musical comedy, with such numbers as ‘Designer Clothes,’ ‘Saks of 5th Avenue,’ and ‘Homeless, not Hopeless’ and stars Mary Ellen Gridley and Bill Brunold.

Theatre Americana was formed in the 1930s by funds set aside from President and Mrs. Roosevelt to provide job opportunities for performing artists.  Throughout Theatre Americana’s golden years, activities included the production of hundreds of plays and oversight of playwriting contests.  Theatre Americana played host to numerous indoor and outdoor performances dating back to the 1930s at the historical Farnsworth Park amphitheater and Davies Hall.  Peter the Great was the first play to premiere at this venue on April 22, 1934.  Zane Gray provided the money for the lighting of this very first production.  Currently, Theatre Americana continues to thrive by producing original work by local artists, and by providing a low cost musical theatre experience to audiences of all ages.  Theatre Americana has been a grant recipient from the L.A. Commission for the Arts, and the Pasadena Tournament of Roses, and a six-year recipient of the Pasadena ARTNIGHT grant.  Visit Theatre Americana at www.theatreamericana.com.