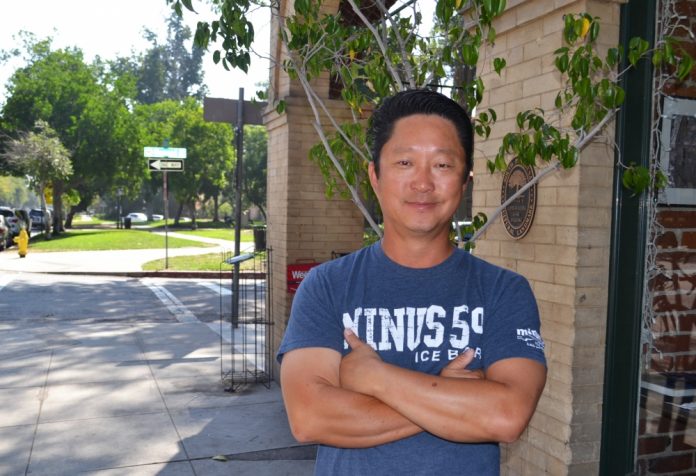 Coach Jeff Chi has been coaching for over thirty years and has seen his fair share of, well, just about everything. An East Coast transplant who became a Tiger as a freshman and graduated in ‘87, Chi began coaching at SPHS in 1988 (while attending UCLA), becoming head football coach in ’91 with Dave Martinez as the youngest football coaches in CIF. He married a fellow Tiger, Felicia Salazar, and raised two more Tigers, Jasmine, who attends SDSU and Gavin, a current senior on the football team. “Everybody went to South Pas in my family and still going,” says Chi, “it’s a great place to be and I want a similar experience for the kids who are in our program; to have a positive experience so that after they graduate they’ll want to come back and give back.”

1991 was a very successful season going all the way to the playoffs but losing to a team in the very last minute which then went on to win the championship. Chi and Martinez often look back on that “what if” moment and to this day, he reminds his players “it could be that one play that prevents you from winning so you have to make the most of every situation and give it all you’ve got.”

When asked about this year’s team, Chi says he’s been working with them since the end of last season and offers, “it seems like I’ve known these kids forever but when I really evaluated it, I realized we do have a lot of young, inexperienced kids who’ve never played varsity football. But at the same time, they’ve come a long way and they found a way to win their first game and now it’s just a matter of getting better each week. I think there’s a lot of potential to tap into that will make this team a great one.”

Chi calls his son Gavin, playing fullback for the team, “one of those unselfish, do it for the team kind of guys; he’s there mainly to make holes for Jackson (Totleben) to run and have those huge gains. That’s what I like about Gavin, it’s about “this is what I’m good at, this is what I’m going to do for the team” and just goes for it.”

When asked about his coaching philosophy Chi says, “I treat them like they’re my own kids; even though one of my kids is on the team, I try to treat them all as my own in that, as a parent, sometimes we have to discipline them. Sometimes we have to get on them a little bit. But at the end of the day, you love your kids, they’re your kids so we do everything out of love. We do everything out of support and I’m very fortunate to have a coaching staff who believes and feels the same as I do.” The coaching staff is also made up mostly of lifelong locals who as Chi says are “very mature, they’re dedicated and committed to these kids. I think we’re gelling in that sense. The kids are not only playing for each other but also for the coaching staff.” Chi says the staff spends endless hours week in week out, on weekends, trying to prepare the players to be in the best position possible to win the games each week.

Chi realizes that no one is perfect and emphasizes that to the team telling them “everyone makes mistakes so learn from your mistakes, own them, and always think about the guy that you’re playing next to. Individually we’re not going to build a team; but together we can. And so, you play for one another, you rely on your brothers next to you and really give it all. And sometimes that means being on the field and playing with them or it could be on the sideline cheering them on. As long as you’re connected and in the right mindset of supporting one another, that’s all we could ask of every individual.”

Coach Chi gets nostalgic when he thinks of this year’s seniors saying, “it’s a very special group. I’ve coached them from freshman year and up, riding this wave with them and even back to when Gavin played Pop Warner with Jackson Totleben so I’ve seen him run the ball from back then and there are a lot of kids that have come a long way; kids from other districts..they all came in and believed they were a family and have just been working hard.”