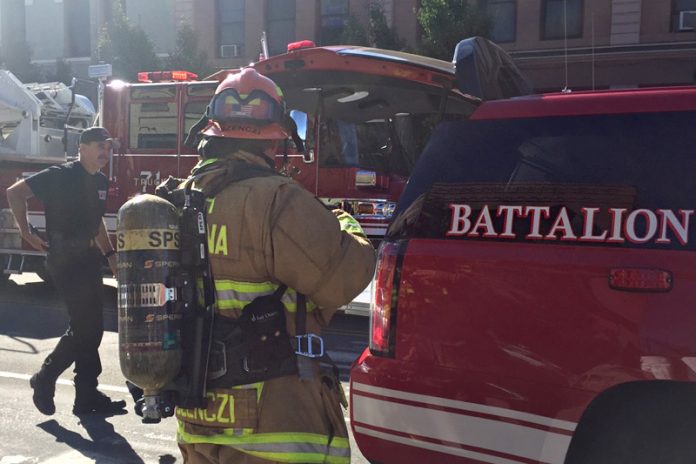 SOUTH PASADENA, CA- On August 15, 2017 at 6:33 A.M., South Pasadena Police 9-1-1 Dispatch received several calls reporting an explosion and smoke coming from an apartment building in the 1700 block of Huntington Drive. According to Cpl. Craig Phillips of South Pasadena Police, “the police were first on scene followed shortly by fire.”

SPPD, SPFD were assisted by Mutual Aide Fire from Alhambra and Pasadena. Said Phillips, “A gas explosion of some kind caused the roof to lift off the building leaving insulation all over the parking lot. The victim, who says she was sleeping when the explosion occurred and was thrown from her bed, was found with severe burns and was transported to Huntington Hospital.” He went on to say, “the victim was conscious when found and was saying that she thought she may have left the stove on. That was the gist I got from officers and of course that will be investigated.”

Phillips says the victims burns were severe enough that he imagines she will eventually be transferred to a burn unit. He says he believes the building has been red-tagged and the investigation is ongoing.

SPFD Fire Chief Riddle says that upon arriving firefighters “saw smoke coming from the attic and immdiately started evacuating the building. The victim was found and transported very quickly. It was a coordinated fire effort; they ventilated the fire by taking the roof off, fire exited the roof and hoselines were used inside the building and it was a quick knockdown.”

The entire twelve unit apartment building was evacuated and the fire itself was contained within 45 minutes. Phillips indicated that the building was severely damaged. The cause of both the explosion and fire are under investigation and is on-going with both police and fire investigators working collectively.

Update: South Pasadena Fire Chief Riddle says that the female victim was indeed transferred to an LA County burn unit. No further information on her condition was made available.