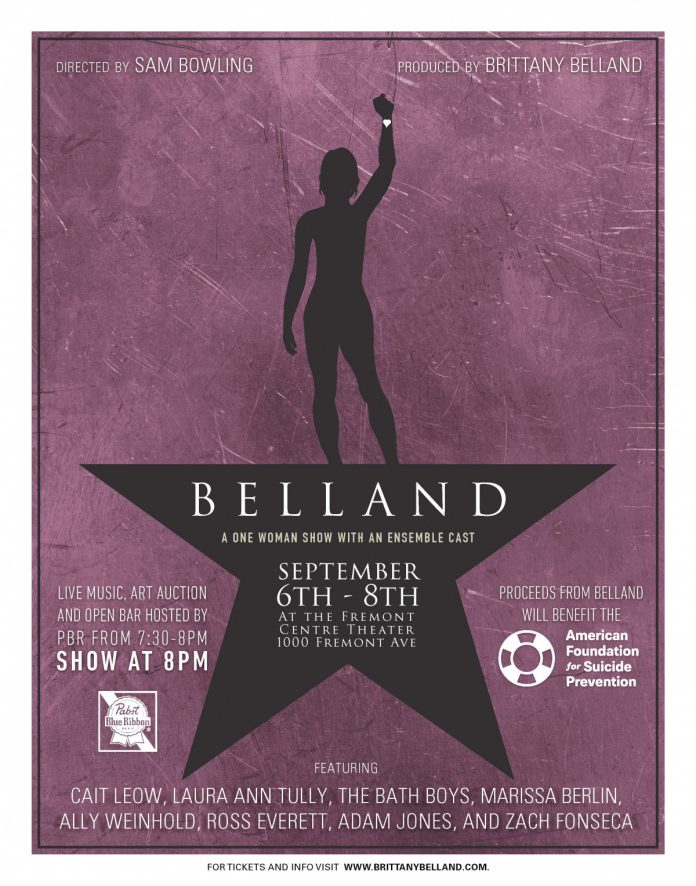 Brittany Belland is back in South Pasadena to share a funny, entertaining and powerful ensemble variety show, BELLAND,  to benefit the American Foundation for Suicide Prevention. The show takes place at Fremont Centre Theatre in South Pasadena at 8pm and will include a pre-show silent art auction and open bar hosted by Pabst Blue Ribbon in the courtyard of FCT from 7:30-8pm. All proceeds from the auction, donation bar and ticket sales will go directly to the American Foundation for Suicide Prevention.

Belland has been a working actress, writer and producer in the Los Angeles area for the past six years and South Pasadena audiences will remember her from the recent run at FCT of her original cannabis advocacy musical satire, Willy Wonka and the Weed Factory. Belland has appeared in many commercials and stars in the upcoming film Other Versions of You, also starring CJ Perry.

Belland tells us “I wanted to do something that could benefit others so I decided to put together this event to help bring awareness to mental health. I’ve personally struggled with mental health issues since I was in high school and I’m proud to have an opportunity to share my story with others in hopes of bringing about more awareness.” The seed of the idea came in late spring and Belland has been gathering the talent and working on the show ever since. The show contains a whole host of entertainment including acts like the Bath Boys of YouTube fame, Ross Everett’s parody of a self help guru, a phenomenal standup comic along with singers and dancers while being woven together by Belland’s journey as she acts as mistress of ceremonies.

Director Samantha Bowling (Blood Brothers, Tomb Invader, Back to Awesome) was all in from the get go and says, “it’s been amazing to see how much people want to help; there have been so many people throughout this entire process who have generously donated their talent, time and money.” She goes on to say, “this is an issue that a lot of people care deeply about and I think our society is starved for healthy discourse and catharsis around this subject and when they get an opportunity to have that, they really lean into it. It gives me a lot of hope.”

When asked what they hoped audiences come away with, both Belland and Bowling replied, “we hope they feel less alone.” Continues Bowling, “I hope they feel empowered to lean into their mental health and taking care of themselves and I hope they have a better understanding of how to support people that they love who are struggling. I hope people leave thinking that these things aren’t so hard to talk about.”

And both will tell you that as serious a subject as it is, the show is highly entertaining, funny and heartfelt.

Tickets are $20 and include an open bar. The pre-show auction and bar will take place at before each performance from 7:30-8pm.  Tickets are available at the door and ahead of time at www.BrittanyBelland.com