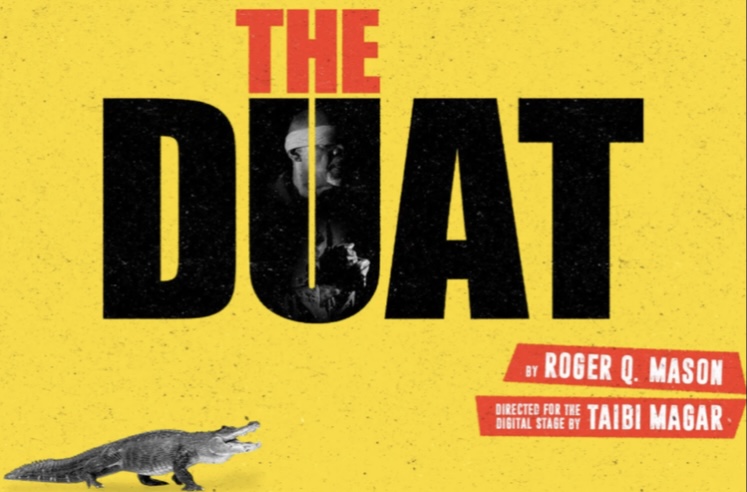 Fusing dialogue, music and movement, “The Duat” follows Cornelius Johnson, a former FBI COINTELPRO (Counterintelligence Program) informant as he awakens in the Egyptian afterlife. While he awaits judgement, Cornelius struggles to come to terms with his family history and his own troubling role in the civil rights movement at UCLA in the late 60s. The digital premiere of “The Duat” features lighting design by Brandon Baruch; live music composed and performed by David Leach; sound design and original music composed by David Gonzalez and choreography by Michael Tomlin III. “The Duat” was filmed at the Kirk Douglas Theatre and edited by Jabari Phillips.

A series that amplifies and centers Black artists, Not a Moment, But a Movement events feature the work of multiple artists from varied disciplines. Each of the artists offers their own distinct voice which blends with, builds upon and sometimes clashes up against the other voices to create a unique piece that centers conversations that have long been held to the periphery. Each event is paired with a panel discussion to create a uniquely comprehensive cultural experience.

Hollywood’s legendary El Capitan Theatre presents Disney’s “Jungle Cruise”  July 30 through August 10, 2021, shown in brilliant Dolby VisionTM Laser Projection & Dolby Atmos® Audio Technology. Guests can take a picture at a “Jungle Cruise” themed photo op and see iconic costumes from the movie. There will be a special Opening Night Fan Event on Thursday, July 29th at 9:00 PM. Guests will be among the first to see “Jungle Cruise” and each ticket includes reserved seating, 1 DOLE Whip®, 1 bottled beverage (20oz) and an Opening Night Fan Event Souvenir Credential with Lanyard.  Tickets for this special opportunity are $40.00 per person no matter of age.

Inspired by the famous Disneyland theme park ride, Disney’s “Jungle Cruise” is an adventure-filled, rollicking thrill-ride down the Amazon with wisecracking skipper Frank Wolff (Dwayne Johnson)  and intrepid researcher Dr. Lily Houghton (Emily Blunt). Lily travels from London, England to the Amazon jungle and enlists Frank’s questionable services to guide her downriver on La Quila—his ramshackle-but-charming boat. Lily is determined to uncover an ancient tree with unparalleled healing abilities—possessing the power to change the future of medicine. Thrust on this epic quest together, the unlikely duo encounters innumerable dangers and supernatural forces, all lurking in the deceptive beauty of the lush rainforest. But as the secrets of the lost tree unfold, the stakes reach even higher for Lily and Frank and their fate—and mankind’s—hangs in the balance.
Tickets are now on sale at www.elcapitantickets.com and at https://www.fandango.com/el-capitan-theatre-aacon/theater-page.  All seats for this engagement are reserved: $22 Adult, $18 Child (3-11)/Senior(60+).