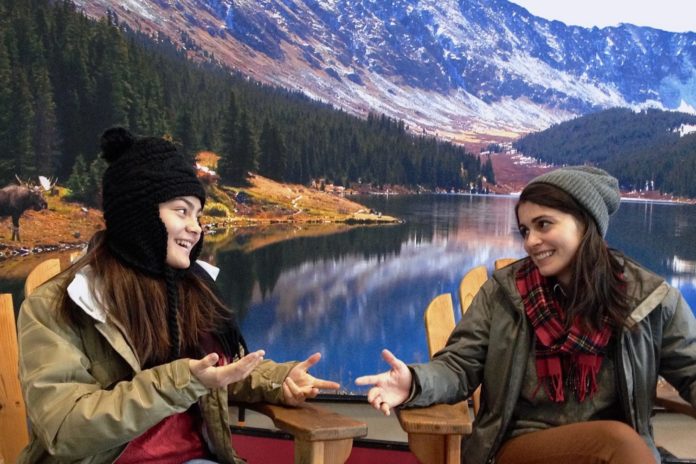 Children need exposure to extremes and opposites. A steady diet of anything too structured or too permissive is not what I’m suggesting. It’s best to have both together. In a word: balance.

Your child needs to interact frequently with successful, like-minded adults. That level of engagement begins at home. I started talking to my children as adults since they were little. Of course, there are some subjects I didn’t share with them, but not many. No baby talk after they began to speak. We also keep it light, act goofy, breakfast in the park, foot race mountain trails, and come up with ridiculous things to talk and laugh about. We don’t do normal (What is normal? I haven’t a clue). Life, when spiced with weirdness, is best.

A word to the wise: your children need a break sometimes. Lauren and Maia were so burdened with school study, homework, after school sports, piano and violin lessons and practice and performances, I added a corruption clause to my marriage contract (figuratively speaking). My wife agreed to allow me to take them along with me to a place, date, and time of my choice. The idea is to break up the intense and all-consuming focus on academics and the year-round cycle of preparing for college admissions. I called it a necessary corruption.

Off the wall things, like taking Maia to the Warped Tour to stew in the heavy metal soup of pot smoke, f’ bombs, and mosh pits. We made it our annual tradition until she went to college. Lauren and I hung out late nights writing (me) and writing music or doing homework (her) at Mel’s on Sunset in Hollywood. Yes, even on a school night. Corrupting forces are not brilliantly inappropriate if your child gets a good night’s sleep on a school night.

Cherished memories. Meaningful moments. Isn’t that what life is all about? Expose your child to places and events they will never forget. It will help grow your relationship over a lifetime.

The Day the Music Died

In 1991, my eldest daughter Lauren was born on February 3rd, known as The Day the Music Died, from the lyrics of Don McLean’s song “American Pie” about a tragic plane crash in 1959 (a month after I was born). We traveled to Clear Lake, Iowa, to attend the 50th-anniversary concert at the Surf Ballroom commemorating the loss of rock ‘n roll’s rising stars: Buddy Holly, JP “Big Bopper” Richardson, Jr., and Ritchie Valens. The ballroom was a stop on the “The Winter Dance Party” tour. Tragically, their chartered plane went down in a nearby cornfield due to poor weather and pilot error. All three died on impact, including the 21-year old local pilot, Roger Peterson.

We visited the snowy crash site memorial at the frozen cornfield, and later Lauren met with Ritchie Valens’ sister, Connie. Together they reflected on the importance of music in their lives and the uniting power of song.

During the concert “50 Winters Later,” Los Lobos performed the traditional Mexican song “La Bamba,” and Los Lonely Boys played their hit song, “Heaven.” Buddy Holly’s widow Maria said a few words about her late husband. Buddy and Maria were married only six months before his death. She was a month and a half pregnant but miscarried upon hearing the news of his death on the radio. JP Richardson’s son Jay performed his father’s hit song “Chantilly Lace” using a vintage dial telephone prop, and we all sang happy birthday to Graham Nash.

Tommy Allsup also made an appearance. He was the guitarist traveling with Buddy Holly’s band on that fateful night, losing his seat on the plane in a coin flip to Ritchie Valens. When Holly learned that his bass player Waylon Jennings also gave up his seat on the plane to the Big Bopper who was suffering from the flu, he joked, “Well, I hope your ‘ol bus freezes up.”

Waylon Jennings recorded sixteen No. 1 country singles during his career, but his last words with Holly haunted him for the rest of his life.

My daughter turned 18 at midnight at the Surf Ballroom as the celebration was winding down. We’ll never forget that night, especially the walk back to our rental car. The temperature outside the Surf Ballroom was nine degrees below zero. We were wearing our Southern California thin skin, but the pain from the cold subsided within a minute. Strangely, we stopped shivering. Just a mild case of hypothermia, I suppose. Lauren and I started laughing as we walked to the rental at a casual pace the rest of the way.

On the drive back to the airport, we played Buddy Holly and Ritchie Valens songs. Music became the foundation of our daughter-father bonding on long drives when Lauren was an infant strapped in her car seat while I played classic rock on the car radio. Back then, auto malls, shopping centers, and freeway overpasses blazed by on my weekly visitation trek between Los Angeles and Orange County. Now, the Iowa farmland raced by in a panorama of snow-covered barren fields and sub-zero desolation. Although our view had changed in those two points in time, inside our toasty Toyota sedan, the joy of music was still the constant in our relationship. And it will survive us as it moves through us to future generations.

Discover What Makes Your Kid Tick – Then Support It!

Practically speaking, I did my best to pay attention to their daily and weekly routines. And I lavished my daughters with sincere praise, using specific examples of their behavior to make it meaningful.

I believe in their greatness always. And I always will.

I listen to them, especially when things don’t go as planned. I ask questions and repeat back to them my understanding of what they are telling me. I do this for clarity and to show them I am genuinely interested in what they are saying. This active listening technique lets them know I am not judging them, so they are more likely to open up in the future.

Believe your kids are awesome unconditionally.

Listen to them, learn what makes them tick, support their interests, be flexible, and then take a step back and watch them fly.

Parents can only provide the topsoil that nurtures their child’s passion. Because it takes a self-motivated, highly-competitive, and naturally adept child to make consistent strides toward extraordinary careers.

There is no luck or chance about it. Louis Pasture said, “Chance favors the prepared mind.” Talent. Skill. Passion. Hard work. All that and more. A word of caution, though: parenting with unrealistic expectations is like wielding a dull Civil War cavalry sword. It does the job but makes your child a bloody mess.

Imagine if people called you a genius your whole life. There is a slew of unrealistic expectations for success you must endure while growing up. In musicians-speak, you are considered a prodigy, are classically trained, then relentlessly poked and prodded at Julliard.

Such children may experience isolation due to the enormous pressure to demonstrate their abilities over a lifetime. They are named the conductor of a small-market city orchestra at age 23, then they pop a cap in their brain or are found swinging from piano wire attached to organ pipes at the music hall at age 30.

So, again, for you manipulative parents who are still trying to create overachievers to get them into the top universities: at some point, you need to take a chill pill. Acceptance of your daughter or son requires unconditional love and knowing when to let go. Children typically bloom when their parents are not in the room.

A successful life comes in all shapes of failure. Learning from our mistakes and never giving up on our dreams. The flame of passion never goes out. As parents, we only need to stoke the embers of greatness in our children and enjoy the burn.