A Noise Within (ANW), the acclaimed classic repertory theatre company, is thrilled to announce its 2019-2020 season with the theme, THEY PLAYED WITH FIRE. A Noise Within’s current season subscribers and donors were invited to hear the news first at an exclusive event held last night on A Noise Within’s Redmond Stage. Season passholders and
new subscribers will have the opportunity to access priority seating beginning today. Single
tickets will go on sale to the public on Tuesday, June 11.

“A Noise Within’s 2019-2020 season embraces the incandescent power of change,” said ANW Producing Artistic Directors Geoff Elliott and Julia Rodriguez-Elliott. “Our upcoming titles are peopled with formidable characters – torches in hand – willing to either burn down the house or build a mansion of possibility.”

A Noise Within’s fiery new season begins this summer with the California premiere of Nick Dear’s adaptation of the chilling fable by Mary Shelley, Frankenstein (August 11 – September 8, 2019). Frankenstein will be directed by guest director Michael Michetti, who also directed the critically acclaimed adaptation of Oscar Wilde’s shocking and provoking novella, A Picture of Dorian Gray, for ANW’s 2018-2019 season.

The new year will begin with a stirring production of William Shakespeare’s emotional romance, The Winter’s Tale (February 9 – April 11, 2020), directed by Geoff Elliott, who recently won a Los Angeles Dramatic Critics Circle Award for “Best Direction” for Rosencrantz and Guildenstern Are Dead. The Winter’s Tale will run in rotating repertory through the spring with Lewis Carroll’s Alice in Wonderland (March 1 – April 18, 2020), directed by guest director Stephanie Shroyer, who had previously directed LA Times Critic’s Choice, The Madwoman of Chaillot, in ANW’s 2017- 2018 season.

Then in May, A Noise Within will close its most explosive season yet with Stephen Sondheim’s Tony Award®-winning musical thriller Sweeney Todd: The Demon Barber of Fleet Street (May 10 – June 7, 2020). Julia Rodriguez-Elliott will direct the twistedly macabre revival that will run on its own for four consecutive weeks. ANW Producing Artistic Directors Geoff Elliott and Julia Rodriguez-Elliott concluded, “whether they are teetering on the precipice of redemption (Gem of the Ocean, The Winter’s Tale), or revenge (Sweeney Todd), or haunting revelation (Frankenstein, Buried Child), or even an outrageous romp down a rabbit hole (Alice in Wonderland), they are all staking their lives on a chance to transform the world around them.”

“We invite you to join us as we venture with these risk-takers, revolutionaries, and game
changers,” said Elliott and Rodriguez-Elliott.

To become a season passholder, visit http://www.anoisewithin.org/membership or call the Box Office at 626-356-3121. A Noise Within’s Box Office is located at 3352 East Foothill Blvd., just north of the Madre Street exit off Interstate 210, in Pasadena, Calif. 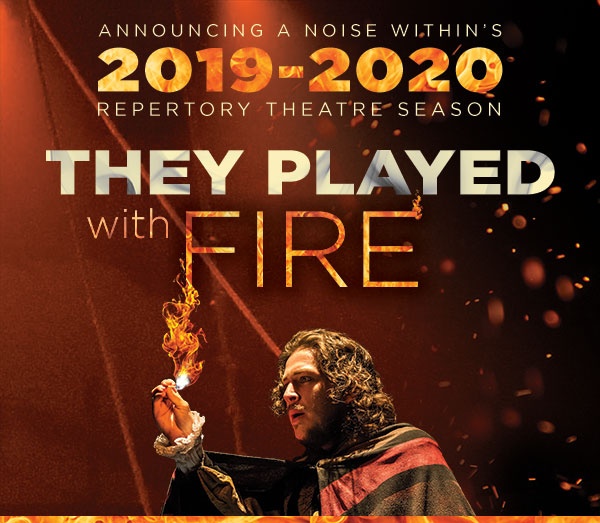 Frankenstein | California Premiere: August 11 – September 8, 2019
By Nick Dear
From the novel by Mary Shelley
Directed by Michael Michetti
This electrifying tale of a creature cast away by his creator into a hostile world—only to wind his way back in a dangerous game of mutual destruction—has captivated audiences for over 200 years. The gothic story comes to life with Nick Dear’s adaptation of the chilling fable by Mary Shelley, animating the themes of social rejection, intellectual hubris, and the nascency of good and evil.

Gem of the Ocean | September 22 – November 16, 2019
By August Wilson
Directed by Gregg T. Daniel
Pulitzer Prize winner August Wilson unfolds the African American legacy in the first chronological episode of his celebrated American Century Cycle—a soaring, mystical tale of a man desperate for redemption in 1904 Pittsburgh. Aunt Esther, a 285-year-old “soul cleanser,” sends him on a spiritual journey that dissects the nature of freedom amidst oppression and spurs him to take up the mantle of justice.

Buried Child | October 13 – November 23, 2019
By Sam Shepard
Directed by Julia Rodriguez-Elliott
Set in America’s heartland, Sam Shepard’s powerful Pulitzer Prize-winning play details, with
shocking hilarity, the disintegration of the American Dream. When 22-year-old Vince unexpectedly shows up at the family farm with his girlfriend Shelley, no one recognizes him. So begins the unraveling of dark secrets. A surprisingly funny look at disillusionment and morality, Shepard’s masterpiece is the family reunion no one anticipated.

The Winter’s Tale | February 9 – April 11, 2020
By William Shakespeare
Directed by Geoff Elliott
King Leontes, consumed by unwarranted jealous rage, unleashes catastrophic violence upon his loved ones, shattering the royal family and plunging him into deep remorse. But bitter winter’s thaw ushers in a spring of regeneration and miraculous forgiveness in William Shakespeare’s celebrated romance.

Alice in Wonderland | March 1 – April 18, 2020
By Eva Le Gallienne and Florida Friebus
Adapted from Lewis Carroll
Directed by Stephanie Shroyer
Crash through the looking glass with Alice on her zany adventure to an upside-down magical dreamland where imagination defies reality and madness makes logic. Weaving a dark and whimsical poem of colorful eccentrics, Lewis Carroll’s fractured fairy tale creates a prism through which we can again experience the mystery and effervescent wonder of growing up.

Sweeney Todd: The Demon Barber of Fleet Street | May 10 – June 7, 2020
A Musical Thriller
Music and Lyrics by Stephen Sondheim
Book by Hugh Wheeler
From an adaptation by Christopher Bond
Directed by Julia Rodriguez-Elliott
With a dash of depravity and a brilliant score, this Tony Award®-winning musical thriller shocks the senses with savage comedy, stunning terror, and razor-sharp wit. Savor the macabre madness as a murderous barber, hungry for revenge for his long-lost family, strikes a partnership with a beastly baker. It’s a tasty theatrical treat that will appall and enthrall even the stoutest of heart.

About A Noise Within
A Noise Within has been called “an oasis for those who love classic stories” by the Los Angeles Times and is a leading regional producer based in Pasadena, Calif. ANW’s award-winning resident company practices a rotating repertory model at their state-of-the-art, 324-seat performance space. This venue, established in 2011, has allowed ANW to expand its audience, surpassing its previous box office, subscription, and attendance records year after year. In addition to producing world-class performances of classic theatre, the organization runs robust education programs committed to inspiring diverse audiences of all ages. Helmed by Producing Artistic Directors Geoff Elliott and Julia Rodriguez-Elliott, who hold MFAs from San Francisco’s renowned American Conservatory Theatre (A.C.T.), A Noise Within truly delivers CLASSIC THEATRE, MODERN MAGIC. http://www.anoisewithin.org