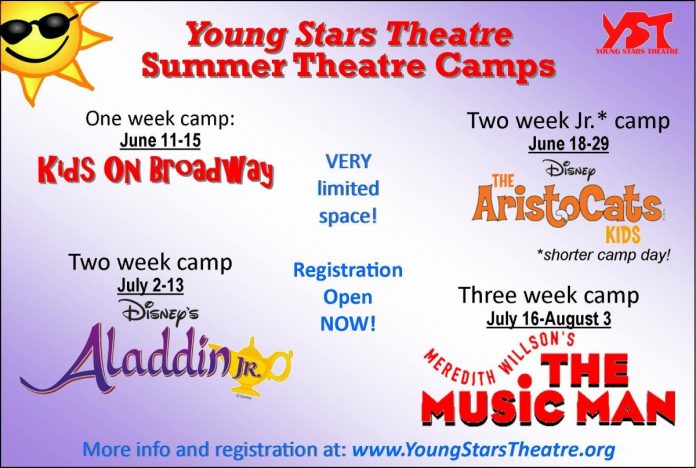 Coming this summer, YST is offering four summer musical theatre and drama camps. The camps range from 1 to 3 weeks, offer multiple public performances, and there is a camp to fit almost everyone!

Beginning June 11 , the first camp is a one week camp (9am to 3pm, M-F, June 11-15) culminating in performances of Kids on Broadway (4 performances, June 16-17), a revue of some of your favorite Broadway and off Broadway moments, both musical and drama. This camp is a great place for the beginning actor to dip their toe in the water, and for the more experienced actor to challenge themselves by putting up a show in just one week!

The second is a two-week Jr. camp aimed mainly at our younger campers, starting June 18th and running through June 29th with four performances June 30-July 1. Featuring a shorter camp day (9am to 12pm, M-F), and the show Disney’s Aristocats Kids (an abbreviated version of the classic movie musical). This camp is perfect for the younger set who may not be ready for the full camp day and the longer show, and more experienced campers with a busier summer schedule.

Third, another two-week camp with full camp day (9am to 3pm, M-F, July 2nd thru July 13) and producing the delightful full musical Aladdin Jr. (8 performances, July 14-15, 20-22).  When the street urchin, Aladdin, vies for the attention of the beautiful princess, Jasmine, he uses a genie’s magic power to become a prince in order to marry her. Iago, Jafar, the Genie and more are here in Disney’s Aladdin JR., a musical adventure filled with magic, mayhem and the power of love. This show has something for just about all ages and skill levels of youth performers to enjoy.

And finally, a three week camp (9am to 3pm, M-F, July 16th – August 3rd) for the full Broadway classic, The Music Man (8 performances, August 4-5, 10-12)! This tale of the traveling “salesman” who meets his match in the stubborn Iowa townfolk never ceases to delight audiences! This camp is already filling up, so don’t wait! If you’re curious about YST and what they do, you can check out their current production of INTO THE WOODS – on stage now! All performances and camps are at YST’s full time space, the Fremont Centre Theatre, 1000 Fremont Ave, South Pasadena. Space is very limited for each camp, so for more info and to get registered, go to www.youngstarstheatre.org 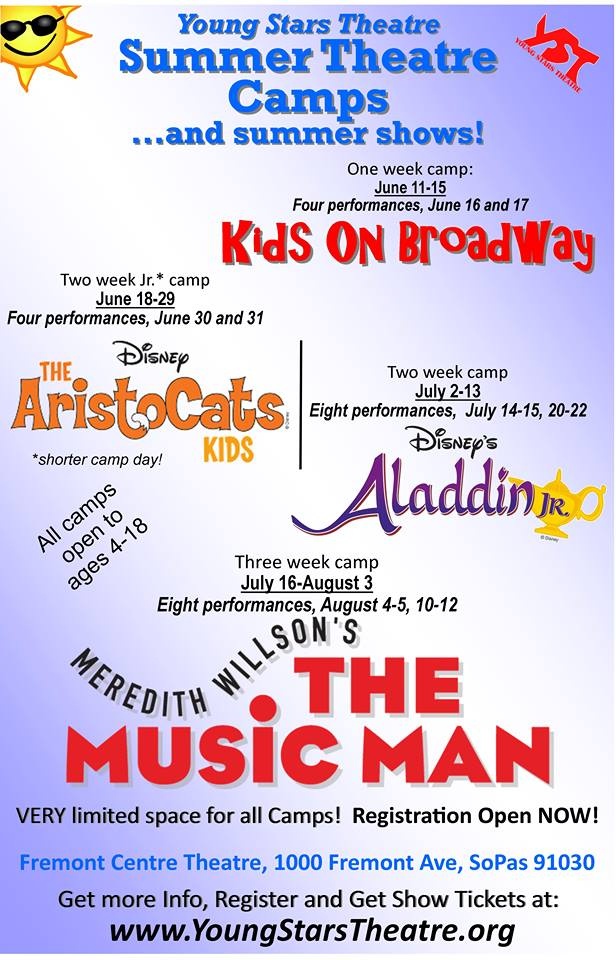