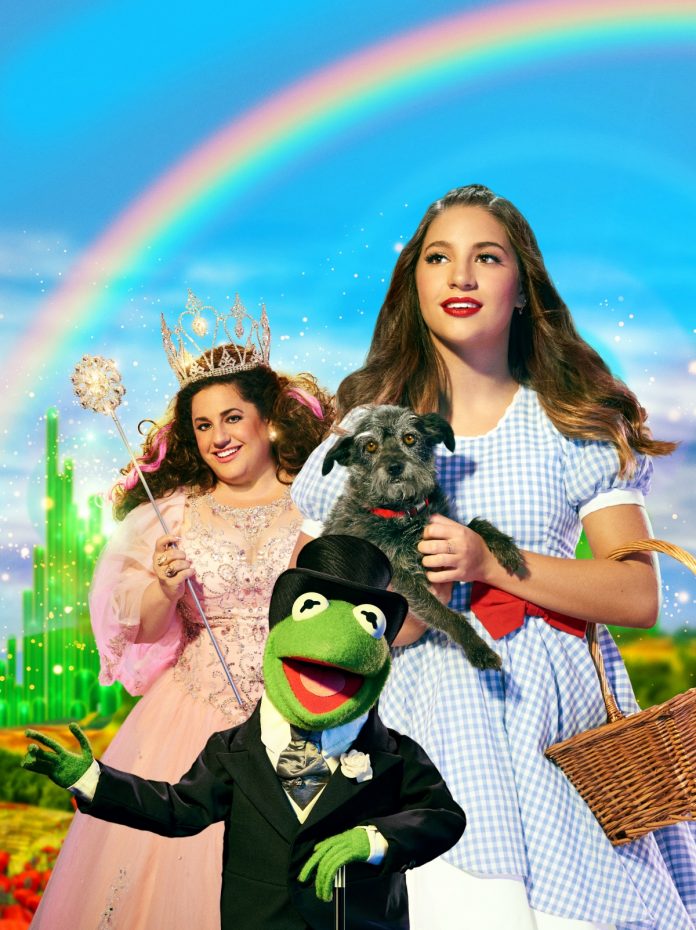 Juan Pablo Di Pace joins the cast as The Cowardly Lion. Fresh off the heels from being a leading contestant on ABC’s “Dancing With The Stars” this season, where he earned 5 perfect scores, Juan Pablo Di Pace can currently be seen as the hilarious “Fernando” on Netflix’s number one show “Fuller House,” now launching it’s fourth season. “Fuller House” has been Netflix’s number one show among audiences across the world since its launch in 2015. Juan Pablo is best known for playing the role of Jesus Christ on the NBC series “A.D. The Bible Continues” (2015) produced by Mark Burnett and Roma Downey for which he won a GRACE Award for “Most Inspiring Performance” at the Movieguide Awards. Juan Pablo is also known for his series regular role on the Warner Horizon/TNT hit show “Dallas” playing the popular dual roles of Nicholas/Joaquin.

His on-screen debut was in the film “Survival Island” along with Billy Zane.  He plays Petros in the movie “Mamma Mia!” (2008) alongside Meryl Streep, Pierce Brosnan, and Colin Firth. He is an Argentine-born actor/singer/dancer and director with an extensive theatre background. Prior to joining the big screen, he appeared in the London production of Chicago and played the leading roles in Grease (Italy, 1999), Saturday Night Fever (Madrid, 2009-2010), Más de 100 Mentiras (Madrid, 2012) and Primer Acto/Act One (Madrid, 2012-2013). In February of 2017, Juan Pablo wrote a sell-out and critically acclaimed show at New York’s Studio 54 titled An Evening with Juan Pablo and this year he headlined The Music Of George Michael with the Houston Symphonic Orchestra.

Wilshire The L.A.F.D. Fire Dog will play the role of “Toto” for one performance only, on Friday, December 21, at 2:30 PM. Wilshire The Fire Dog, a Dalmatian, has served as the L.A.F.D. Fire Dog since he was taken in as a rescue puppy by the firefighters at the Wilshire Blvd. fire station on St. Patrick’s Day, 2006. Wilshire’s mission is to share a message of fire safety and emergency preparedness with children of all ages. Wilshire also wants children to leads healthy lives through physical fitness and a healthy diet.  By exposing children to the benefits of animal rescue and adoption, saving the lives of thousands of orphaned animals as he once was, Wilshire will encourage children to follow the core values of trust, courage, and honesty. Wilshire is forever committed to saving children’s lives through fire safety education.

THE WONDERFUL WINTER OF OZ stars previously announced singer, actress and dancer Mackenzie Ziegler (Dancing with the Stars: Juniors, Dance Moms) as Dorothy, Tony Award winner Marissa Jaret Winokur (Celebrity Big Brother Winner and Broadway’s Hairspray) as Glinda, and features Kermit The Frog® as the Wizard of Oz, Jared Gertner (Broadway’s The Book of Mormon) as The Scarecrow, Phil LaMarr (“Mad TV” and “Pulp Fiction”) as The Tin Man, Yvette Gonzalez-Nacer (Nickelodeon’s The Fresh Beat Band, “Cha Cha” on FOX’s Grease: Live!, National Tour of In the Heights) as The Wicked Witch of the West, Hailee Payne and Valerie Rockey of So You Think You Can Dance, and Rescue Dog Pickle C. Irwin as Toto.

The production will be directed by Bonnie Lythgoe and choreographed by Napoleon and Tabitha D’umo (NappyTabs), with book by Kris Lythgoe and musical direction and arrangements by Michael Orland (American Idol). Casting is by executive producer Becky Lythgoe.

THE WONDERFUL WINTER OF OZ is a Holiday version of America’s favorite modern fairy tale, in the style of a traditional British Family Panto. On Christmas Eve, Dorothy gets swept away by a ‘freak’ Kansas blizzard and lands in a world of munchkins and witches. With songs from Imagine Dragons to Earth, Wind and Fire, THE WONDERFUL WINTER OF OZ is the perfect family experience at the Holiday time. No rainbows will be hurt in this production.

There will also be a special student matinee on December 14, 2018, servicing over 2,000 Title One school children who will be introduced to the magic of live theatre for the very first time.

Tickets start at $40 and Family Four Packs for just $99 can be purchased at the Pasadena Civic Auditorium, online at www.thepasadenacivic.com or by calling 626-449-7362. Golden Tickets, which allow the ticket holder (children ages 4 – 12 only) a special on-stage experience during the production, are available for an additional $75.00 each.  This will be the seventh holiday season of Lythgoe Family Panto in Pasadena, and the second at the Pasadena Civic.

Lythgoe Family Panto produces fun, musical theatre the whole family can enjoy. Known for their creativity and involvement in television hits “American Idol” and “So You Think You Can Dance,” the Lythgoes are dedicated to bringing affordable theatre to families across America. Based on the Grimm fairytales and others, each story has been modernized with topical scripts for parents and well known pop songs for kids. The Lythgoes pride themselves on creating a memorable experience a family can share together.  In 2017 over 6000 title 1 students were introduced by the Lythgoe’s to live theatre, through the medium of Panto.