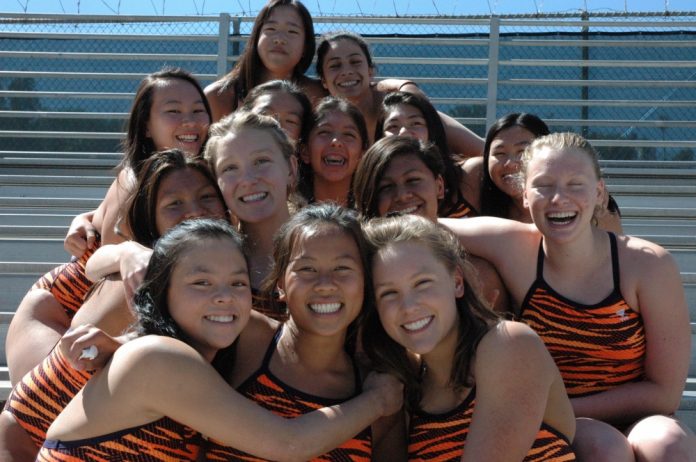 South Pasadena High’s boys’ varsity swimming team continues to dominate its competition, as the Tigers are 2-0 after recent victories over Monrovia and Blair in Rio Hondo League action.

“I think we are a team that is more than just that one and done stroke team,” said South Pasadena High coach Patrick Armstrong. “There are many boys on the team who bring more than one race to the table. By having that strength it gives me the flexibility to put swimmers in to different races, and it helps us compete in a lot of events and races.”

It has taken awhile for the long hours of practice by his to pay off, but Armstrong likes what he’s seeing.  “I thought the beginning of the season we got off to a slower start, but this last week I saw a lot of intention in our races, better swims,” he pointed out. “This last week we got a dose of what back to back race days look like, and I think as a team in general, we looked good. Of course, there is a lot of details in our races we can focus on, but I think we had a productive and good week of racing.”

The Tigers’ victory was especially strong in their lopsided win over Blair. South Pas had a winner in all 10 events, swept 8 of those events.

South Pasadena  High easily won the girls’ varsity competition 140-16  and 113-3 on the JV side. Stay tuned for more details.

South Pasadena High is looking for its first league win after falling to Monrovia 6-1 on Thursday.

The Tigers are 3-7 overall and 0-3 in Rio Hondo League play. With the victory, Monrovia improved to 7-2-1 overall, 2-0-1 against league competition.

South Pasadena is next in action on April 7 when it faces Village Christian at home in a doubleheader. The first game is at 10 a.m., followed by the second one at 1 p.m.

The Tigers were on the short end of a 15-4 game against Monrovia last Thursday, as the fell to 0-4 in Rio Hondo League action.

Monrovia evened its league record a 2-2 and improved to 6-4-1 overall with the victory.

South Pasadena is winless on the season at 0-11 and is gearing up to host Monrovia on Friday, April 13, following spring break. The contest begins at 3:30 p.m.

The Tigers are 8-3 overall on the season, 1-1 in league and face Temple City on April 10 at home.

South Pasadena is in solid position to battle for the league crown.

South Pasadena High had little trouble as the Tigers handed Monrovia a pair of losses in boys’ and girls’ track and field action last Thursday.

The Tigers will be back in Rio Hondo League action April 11 after spring break when they face San Marino.

The busy season continues on April 6 when hundreds of athletes will descend on South Pasadena High to take part in the Tiger Invitational, which brings in top national and international talent.

Richards said he hopes to send some South Pasadena High athletes to Pennsylvania on April 26-28 to compete in the Penn Relays, now in its 124th year.

South Pasadena High won a pair of matches last week, getting past El Rancho 3-2 and Gabrielino 3-0 in nonleague action.

The Tigers had no problem battling Gabrielino last Thursday, sweeping their foes two days after playing a close one against El Rancho. Both matches were on the road.

It took South Pasadena five sets to hand El Rancho a loss. The Dons won the first set 25-20, the Tigers evened it with a 25-21 win in the second, but the Dons battled to win the third with a 25-17 victory. South Pasadena came on strong, winning the final two sets 25-20 and 15-7 to come away with match.

Under coach Ivy Chew, the Tigers are 14-4 overall on the season, 1-1 in Rio Hondo League play.

The Tigers are gearing up to play in the Bellarmine Invitational on April 6.