It’s a brand new season for South Pasadena High coming into the Rio Hondo League opener with unblemished 0-0 record and plenty on the line as the Tigers and rival San Marino battle Friday night in the 65th meeting between the two teams.

South Pasadena High offensive coordinator Jason Barnes told his players this week, “We start all over,” not to minimize the Tigers 5-1 preseason mark by any stretch. “We’ve got four big games ahead of us.

Win them all, starting with a 7 p.m. visit from the 1-6 Titans, who opened league play last week losing 35-0 to Monrovia, and the Tigers will be celebrating their first league championship in 40 years.

Tiger players can sense it, a chance to walk off with the crown, if they continue to play at a high level, running and passing well, and stopping teams on defense.

“I love what we’re doing right now,” said South Pasadena defensive coordinator Brandon Wilson after the Tigers held Pasadena Poly to just three points in the second half last week. “I can trust all 11 players on the field.”

Confidence is high as the Tigers get set to play a team they haven’t beaten since 2010. Following Friday night’s encounter, they hope to put away Monrovia and Temple City, both road games October 18 and 25, respectfully, before playing La Cañada on November 1 in the homecoming game.

Barnes says the Tigers can be unstoppable at times, but penalties and miss blocks sometimes disrupt the rhythm of the game and “we hurt ourselves,” he told his players following the Pasadena Poly victory. “We have to clean that stuff up.”

South Pasadena comes into the San Marino contest after opening the non-league campaign with three straight wins, 53-17 over Mountain View, 21-17 against Viewpoint and 13-6 over Eastside before stumbling against Alhambra (35-21) and finding their way again with the victory over Pasadena Poly.

On the other side, the Titans, under first-year head coach Justin Mesa, struggled out of the gate, losing their first four games, dropping contests to Charter Oak (42-3), Northview (42-7), El Monte (20-7) and Santa Fe (24-7) before coming back to knock over Bell Garden (12-0) for their only victory, and losing to Newport Harbor (48-7) and Monrovia in successive weeks. Doing the math, San Marino has been outscored 223-31.

While the Tigers might be carrying the momentum, the Titans lead the series between the two teams 33-28-3.

“It’s going to be a heck of a ball game,” said Tigers coach Jeff Chi who, along with his coaching staff, has devised a game plan they hope will end the 8-year losing streak to the Titans.

While the odds on favorite might be South Pasadena in this one, Chi plans to prepare his club as if his opponent is 6-1, saying: “We never take anybody lightly.” He knows better as the Tigers have been on the losing end of decisive losses in recent years and are coming off a 3-7 season just a year ago.

Coming away with a victory over Pasadena Poly, a team that came into South Pasadena with a 4-1 record last week, was a statement game. “It says something about our guys,” said Chi, pleased by his club’s performance. “We can beat good quality teams out there.”

The Titans might be feeling the loss of legendary coach Mike Hobbie, who resigned his position as both San Marino’s football and baseball coach earlier this year. Taking over as football coach in 2011, he compiled a 72-24-1 record and never lost to South Pasadena.

In 2015, under his guidance, the Titans won the CIF Southern Section divisional crown and advanced to the state championship game. He announced his retirement in January, promising to coach the baseball team in the spring, and left the teaching profession and coaching at the school last June.

South Pasadena and San Marino will be playing for The Plaque, which carries the scores of all the games played between the two schools, and Crowley Cup, established in 2010 in honor of Paul Crowley, who never played in the rivalry matchup or participated in varsity high school football.

According to his son, John, his father, a 1945 graduate of San Marino-South Pasadena High School, “had a staunch devotion to both of these schools, to both of these cities, and to this annual local rivalry,” he said. “His legacies to this game include his lifelong promotion of both cities, his civic volunteerism and a deep love of high school football.”

Paul Crowley died in December 2012 at the age of 84, but, as his son noted, “the Crowley family is committed to continuing the great tradition and healthy rivalry between these two schools and neighboring cities.”

With little success on the field in 2018, Chi wants his players to have nothing but a positive experience this season, especially over the final four regular season games. “They’ve worked so hard during the offseason with a strong conditioning program, they deserve it,” said the coach. “Hopefully, they’ll keep it going and go after the league (title).”

Standing in the way of it is their rival – San Marino.

A HISTORY of the ARCH-RIVALRY

The arch-rivalry between these two close neighborhood schools is a tradition that goes back many years.

In 1907, the South Pasadena School District was formed. At that time, students living in San Marino attended a high school of their choice, since San Marino did not have its own high school.

The first San Marino-South Pasadena rivalry football game, played in 1955, ended with a 27-0 win for San Marino in front of 6,000 people, and an undefeated season the Titans. Thus began this “Friday Night Classic” to which both schools look forward each year!

As these two teams come together for their 65th game in 2019, many hard-fought and exciting games have been played through the years. 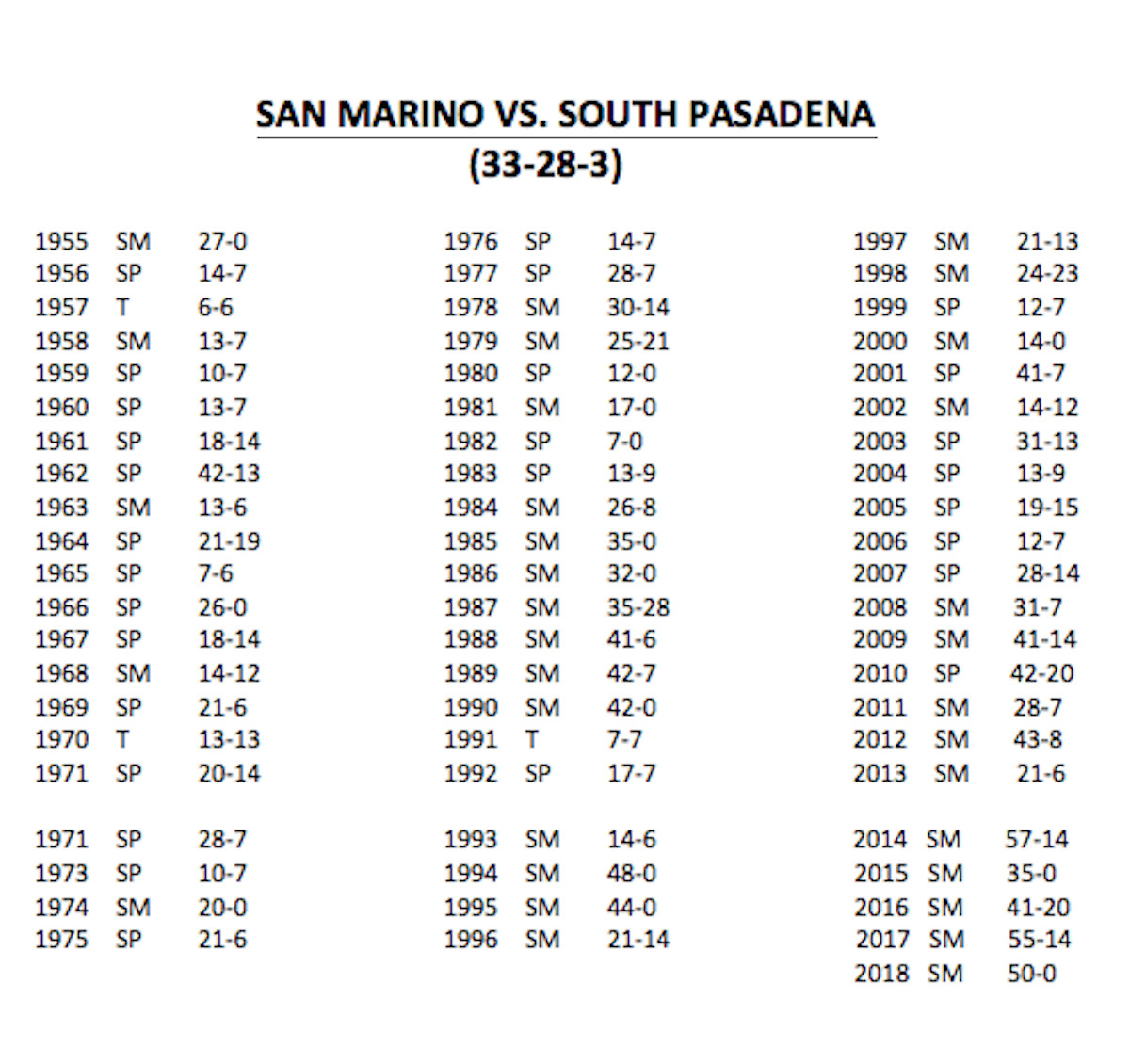 Lineage Performing Arts Center returns to the Gamble House Nov. 4-7 for an encore of their sold-out production, Next to Normal