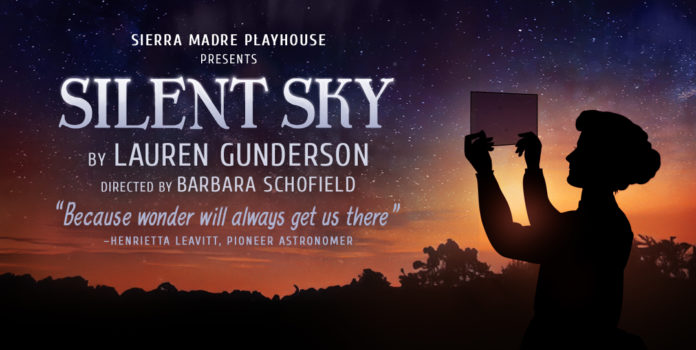 When astronomer Henrietta Leavitt begins work at the Harvard Observatory in the early 1900s, she doesn’t begin by looking through a telescope. She joins a group of women “computers,” charting the stars as a vital part of the world’s first study of the sky done from photographs. As Henrietta, in her free time, attempts to measure the light and distance of stars, she also takes measure of her life on Earth, trying to balance her dedication to science with family obligations and the possibility of love. Based on the life of 19th-century astronomer Henrietta Leavitt, Silent Sky explores a woman’s place in society during a time of immense scientific discoveries.

Lauren Gunderson is the playwright of 21 produced plays. The recipient of an MFA from Tisch School of the Arts, she is a winner of the Berrilla Kerr Award. Her previous works include A Short History of Nearly Everything; The Van Gogh Café; The Happy Elf; The Amazing Adventures of Dr. Wonderful and Her Dog!;I and You (made into a film starring Game of Thrones’ Maisie Williams); and many more. Silent Sky had its premiere at South Coast Repertory in 2011.

Barbara Schofield directs. At Sierra Madre Playhouse, she directed productions of Incident at Vichy (L.A. Times Critic’s Pick), Proof, Arcadia and The Fantasticks. She is director-in-residence and Literary Manager at Open Fist Theatre Company. She is a board member of Sierra Madre Playhouse.  She has served as a faculty member at American Musical and Dramatic Academy. Additionally, Barbara has directed or acted in productions in New York, Kansas City, London and Berlin. Dr. Schofield received her Ph.D. in Theatre from Tufts University.

PLEASE NOTE: Covid-19 safety protocols in effect on performance dates will be observed. As of the writing, audience members must be masked and vaccinated. Vax card or digital record will be checked.

“Silent Sky” is the story of a real woman whose life and discoveries were hugely significant for the exploration of the universe.