A pair of longtime residents will be recognized for their decades of commitment to service next month when the Senior Citizens’ Foundation of South Pasadena hosts its first-ever wine and cheese reception.

Community members appreciative of the impact Granville Thurman and Bob Joe have made over the years are asked to attend the Monday, August 15, Senior Champion Awards from 5-7 p.m. at the South Pasadena Senior Center.

Joe and Granville, who have pitched in big with their share of community service, will be recipients of the organization’s Senior Champion Awards, a first for the organization. Tickets are $25.

Bill Cullinane, the Senior Citizens’ Foundation president, said the celebration also looks to raise awareness about the group’s 100 percent volunteer-led effort that provides a major resource for a large number of seniors in and around South Pasadena.

On July 4th Joe and Granville soaked up the sun and public recognition as they represented the Senior Citizens’ Foundation in the city’s Festival of Balloons parade, waving from a convertible as they rode down Mission Street.

“Based on the community response to Bob and Granny at the end of their parade ride it seems like there are a lot of people who would very much like to honor them if we can only let them know about the function,” explained Cullinane, hopeful a sizeable crowd will turn out to honor two champions of the city.

Together, Joe and Thurman make for a dynamic duo.

Joe, a longtime resident highly active in South Pasadena’s civic government life, has served on numerous commissions in town, was a two term City Council member (2011-2015, 2016-2020) and mayor twice. He continues to be a fixture politically, contributing wherever he can, and giving back to a number of local non-profits today.

Thurman, said Cullinane, is a “remarkable person through his career as both a teacher and principal at the South Pasadena Middle School,” adding that he “has touched the lives of many residents and their children.”

A solid community contributor, Thurman is a member of the Oneonta Club and solidly behind the Oneonta Foundation, which provides annual scholarships to graduating South Pasadena High School seniors.

The Senior Citizens’ Foundation was created in 2006 for the sole purpose of giving monetary support to the South Pasadena Senior Center. “The city budget does not support all of the needs of the Senior Center and much of the programming and infrastructure upgrades are funded by the Foundation,” noted Cullinane. “An example of the type of needs the Foundation supports would be newly scheduled educational and recreational events and the replacement of all the computers at the Senior Center which are relied upon by some of our residents.”

As the fundraising arm of the South Pasadena Senior Center, it provides the dollars to deliver a wide-range of activities seniors appreciate on a daily basis.

Cullinane also says the Senior Center “is one of the gems of our city and means so much to our seniors in the area. Support of the Foundation is critical in keeping the Senior Center vibrant and active into the future.”

The South Pasadena Senior Center is at 1102 Oxley Street in the city.

Senior Champion Awards reception tickets are available online.  To purchase tickets by check, send an email to spseniorfoundation@gmail.com and a member of the Foundation Board will provide assistance. 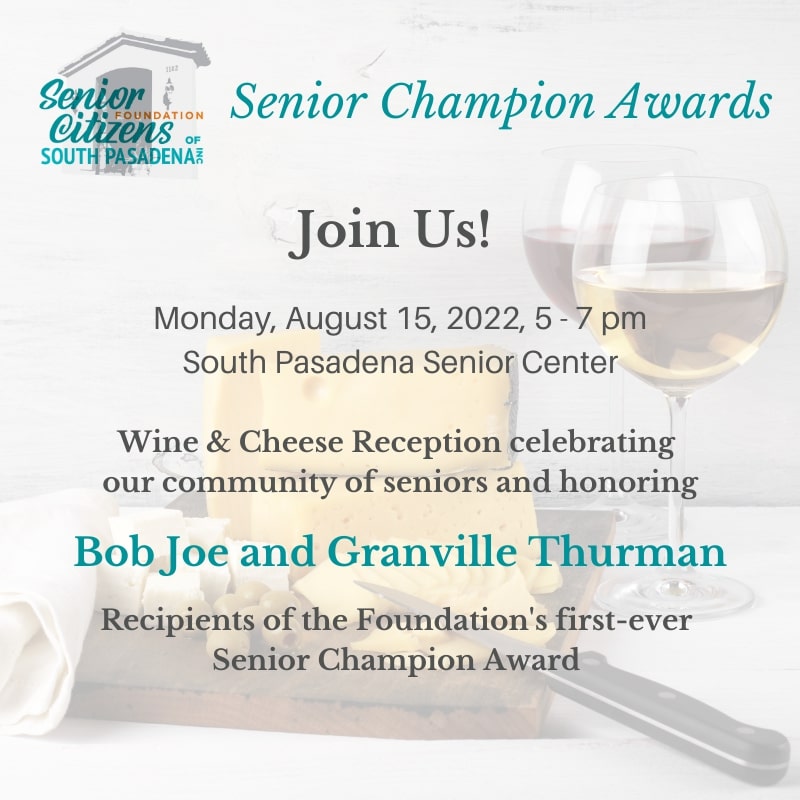