Ryun Yu, in a riveting performance, portrays American hero, Gordon Hirabayashi, who resisted the internment of Japanese Americans during WWII. It’s hard to believe this is essentially a one man show because Yu gives life to all the characters in his life from his parents to classmates and Supreme Court justices. It is a tour de force of physical precision and pure emotion.

We meet a young Gordon living in Seattle during WWII before Pearl Harbor. He enjoys a normal life as a young, American teenager for the most part. Although from an early age, he begins to have experiences of racism and realizing that he is indeed seen as “other”. Then the signs begin to appear, “no Japs allowed” along with many rules about where they could sit in a theater and where they could and could not eat. Then comes Pearl Harbor. Hirabayashi is as stunned as everyone else. 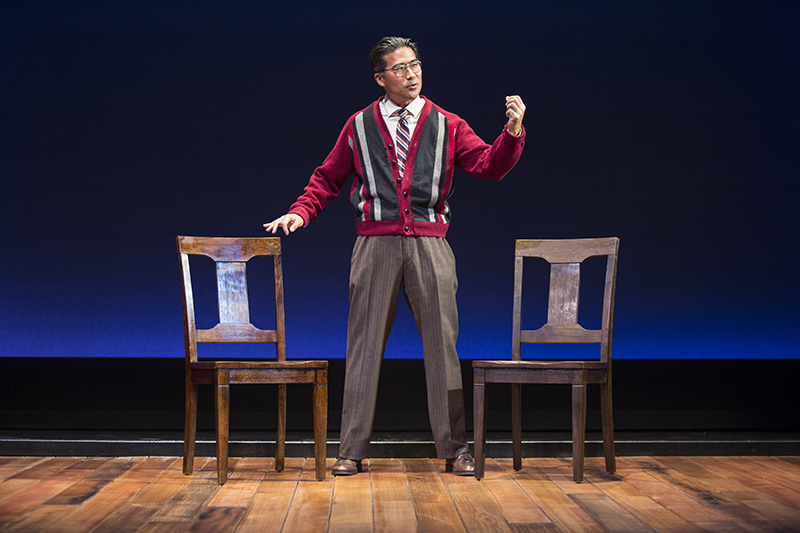 Things move swiftly from there as a curfew is imposed and this becomes the first time Gordon, a Quaker, disobeys the law. He defies the curfew to study in the library and so begins his wholly unexpected journey of activism. For Hirabayashi, his faith in the constitution, that it applied to all Americans, was unwavering and he ended up taking his case all the way to the Supreme Court.

Jeanne Sakata’s play gives us an intimate view into this experience through the eyes of this young man, what happens to his friends and family. In doing so, she gives us a personal perspective most of us have never experienced. It’s a page in our history that many know little about. When Gordon’s mother drops to her knees weeping, every mother can imagine exactly what she is feeling. Sakata has taken this story and made it universal by bringing it into a home, a kitchen, a school campus.

Director Jessica Kubzansky keeps things moving and keeps Yu running, constantly creating time and place using just one actor. You wouldn’t expect there to be humor about such a subject, but Kubzansky allows the wonderful humor and grace of Sakata’s script to breathe, giving the audience more time with Hirabayashi, the man.

I almost want to talk about chemistry because Yu’s performance is so astonishing, you feel you’ve actually seen him holding hands with his crush, Esther, and his mother pleading with him in the kitchen. He paints each character with such tenderness and grace that the stage becomes populated with all of these real people. 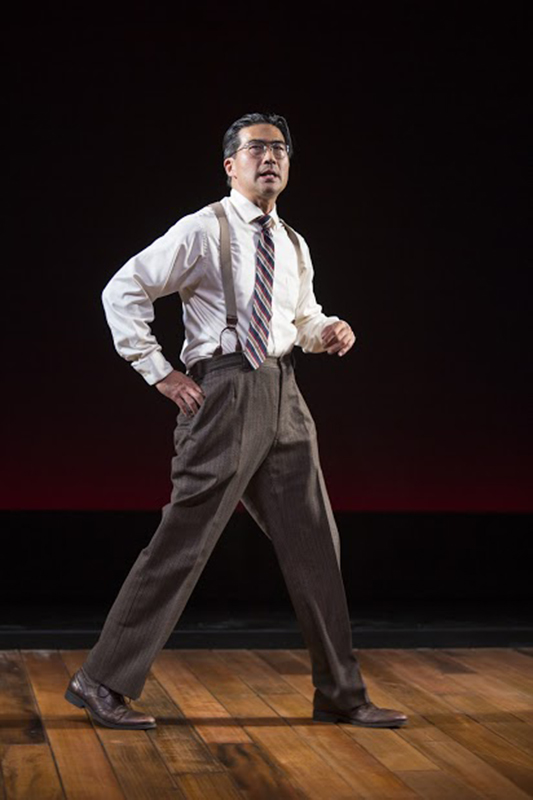 Speaking after the Supreme Court reversal on his case in 1987, Hirabayashi said, “there was a time when I felt that the Constitution failed me. But with the reversal in the courts and in public statements from the government, I feel that our country has proven that the Constitution is worth upholding. The U.S. government admitted it made a mistake. A country that can do that is a strong country. I have more faith and allegiance to the Constitution than I ever had before.”

Sakata’s play is indeed timely and a powerful reminder of the power of one person taking a stand and making a difference.

Pasadena Playhouse will present ​Playhouse Talks post-show engagement activities after every performance, as part of Pasadena Playhouse’s mission as the State Theater of California to bring people together to facilitate open and productive conversations with neighbors, friends and community. Hold These Truths is produced in association with East West Players. For a schedule of ​Playhouse Talks post-show events visit PasadenaPlayhouse.org/HoldTheseTruths. Be sure to visit the Friendship Center off the courtyard where there is a sobering exhibit of the Tuna Canyon Detention Station in Tujunga and of the 33,000 soldiers of Japanese ancestry who served in the military during WWII.