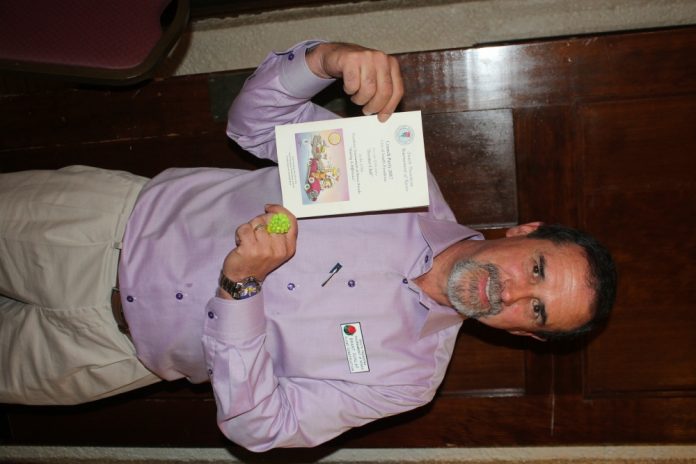 Brant Dunlap says he’s “feeling good” as he looks forward to getting behind the wheel of South Pasadena’s float entry in Monday’s Tournament of Roses Parade.

“I’m looking forward to it,” said Dunlap, a longtime South Pasadena resident and Trader Joe’s manager, who will be in the driver’s seat for the city’s entry– “Booster Club” – as it rolls down Colorado Blvd. on its 5-1/2 mile journey.

Depicted in the float are a group of revelers riding in a vintage roadster as they pull a trailer full of tailgate supplies. All animals on board, there is a tiger – the South Pasadena High School mascot – an ostrich, a symbol of the city’s historical past, along with a giraffe and lion.

Looking down inside a small capsule, Dunlap will keep his eyes on a pink line painted on the street from start to finish as he listens to commands from co-pilot and animator Bryan Sadler, also in the float’s cockpit. Sadler will tell Dunlap when to turn right, left, to speed up and slow down.

A third person, Steve Fillingham, will sit behind Dunlap in the bowels of the float, and handle the sound and hydraulics. To help block out noise, the float crew will all wear headsets as they communicate to one another.

At the conclusion of the parade, SPTOR Construction Chair Chris Colburn will help guide the float from the outside to the post-parade viewing area, where it will be parked and witnessed by thousands for several days following the New Year’s Day spectacle.

“I’m extremely excited,” said Dunlap, who took the float on a pair of recent practice runs up and down Fair Oaks Avenue. “It’s a great responsibility, but at the same time, when you have a float that’s well over 100 years and a long tradition for our city, there’s a lot of meaning. It’s a real honor.”