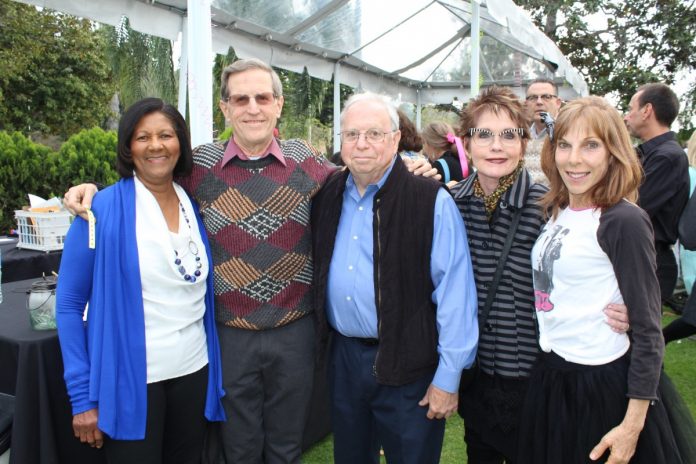 It was popular back then, and Megan Dostel wanted to capture the mood with her “big hair and lots of jewelry” as she described her attire for Saturday’s 1980s themed Parti Gras, a major fundraiser for the South Pasadena Educational Foundation at Arroyo Seco Golf Course. 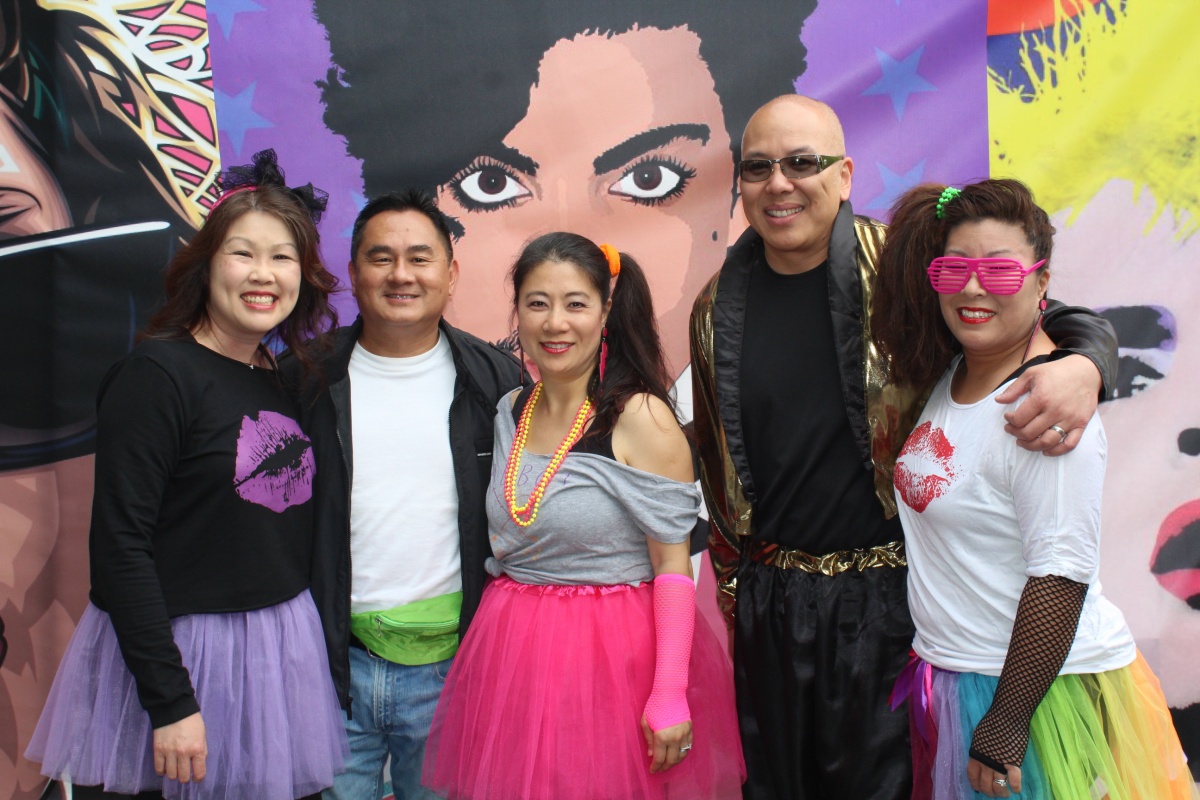 Dostel, the president of SPEF, said she felt like a “mom from a 1980s romantic comedy” movie, as she showed her “gaudy and gold” earrings, going nicely with a red dress from the era and a bevy of bracelets, adding significantly to all the bling.

Some may have said Dostel looked “Rad” as she talked about the importance of putting on a party of this magnitude. “What makes this so special, is our board of directors is made up of 40 moms and dads who have taken time out of their busy lives to give back to SPEF,” she said, praising those who put so many hours in behind-the-scenes to make Parti Gras a huge success. 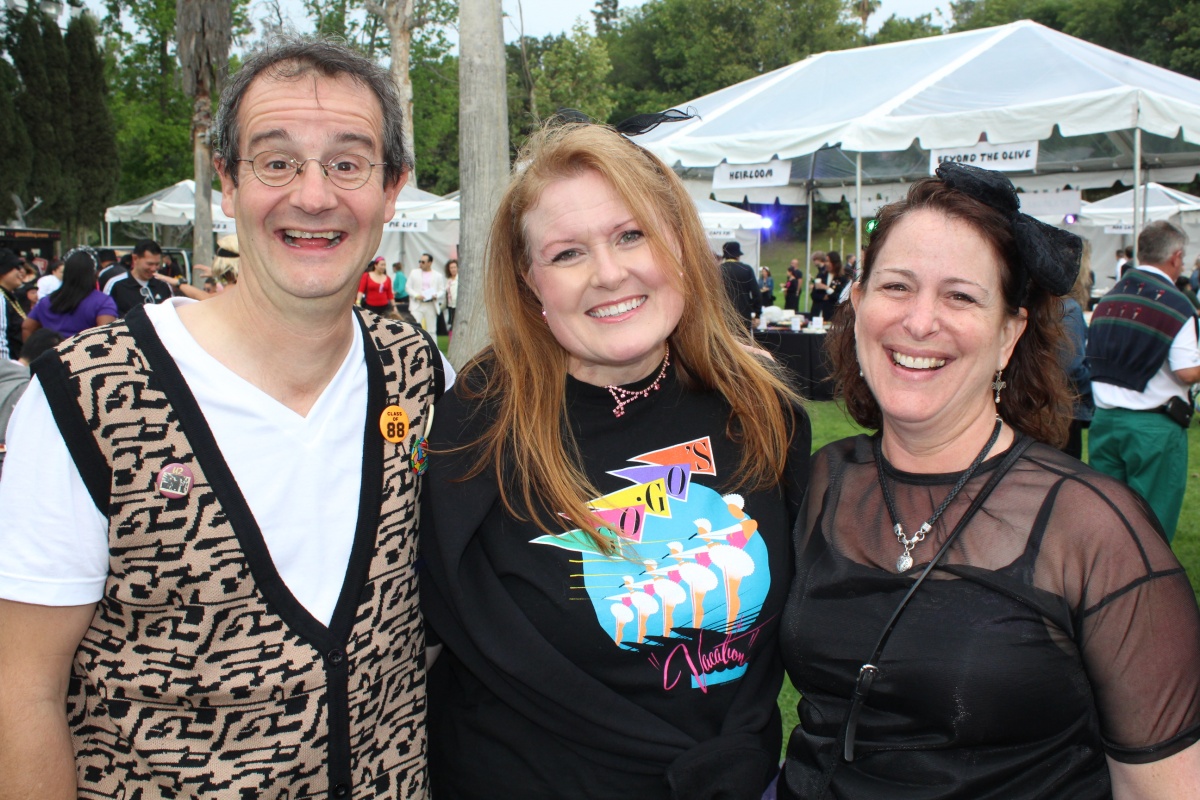 Dedicated board members and others in the community are there every step of the way to make it happen, insists Dostal. “When we put on this event, everyone is helping to execute it,” she said. “We save so much money doing it ourselves.”

For the first time ever, the event, which raises major funds for South Pasadena’s five public schools, was a sellout with 1,000 tickets sold. 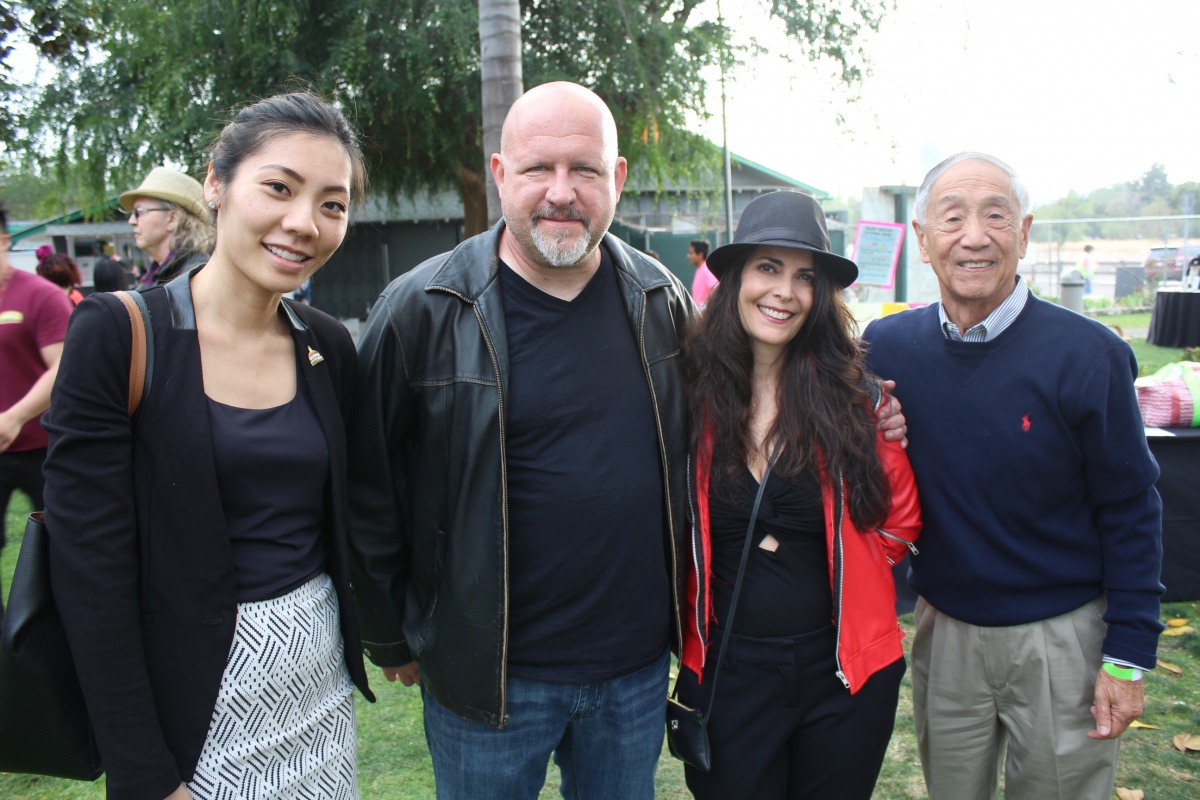 Among the ticket buyers was South Pasadena Mayor Dr. Richard Schneider, who said he enjoyed being a part of it. “People are proud of the community and support the schools,” he said when asked what makes Parti Gras the special attraction it is every year.

Kathleen Michel and Larry Abelson were this year’s co-chairs of the event, noting in the Parti Gras program: “This is one evening of the year that our entire community comes together to eat, drink, and celebrate the best that our wonderful town has to offer. Our goal is to see you smiling, laughing and dancing all night while celebrating and supporting our award-winning school system.” 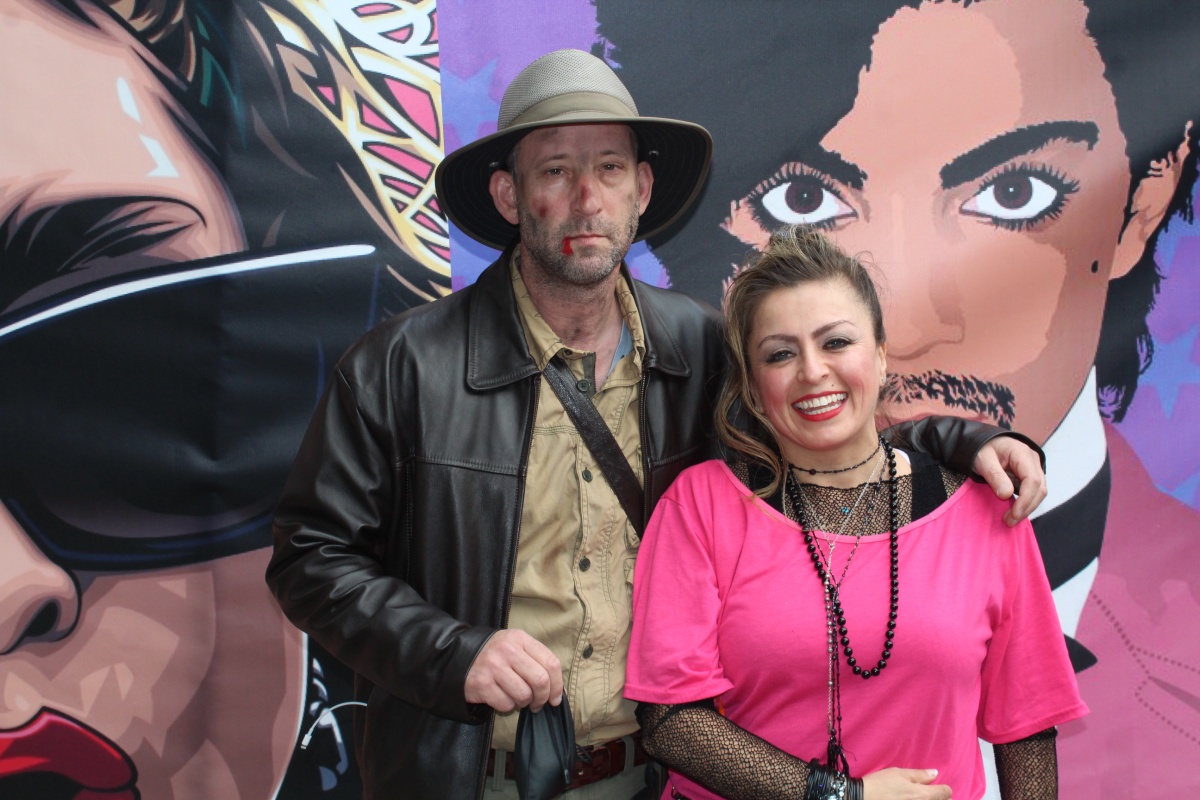 Mission accomplished. Everyone seemed to be smiling, laughing, and dancing.

Michel said a lot of stressful nights, especially the final three days leading up to the big bash, were felt by those closest to the action in putting it all together. “There was a lot of hard work by a lot of people,” she said. “But it all came together.” 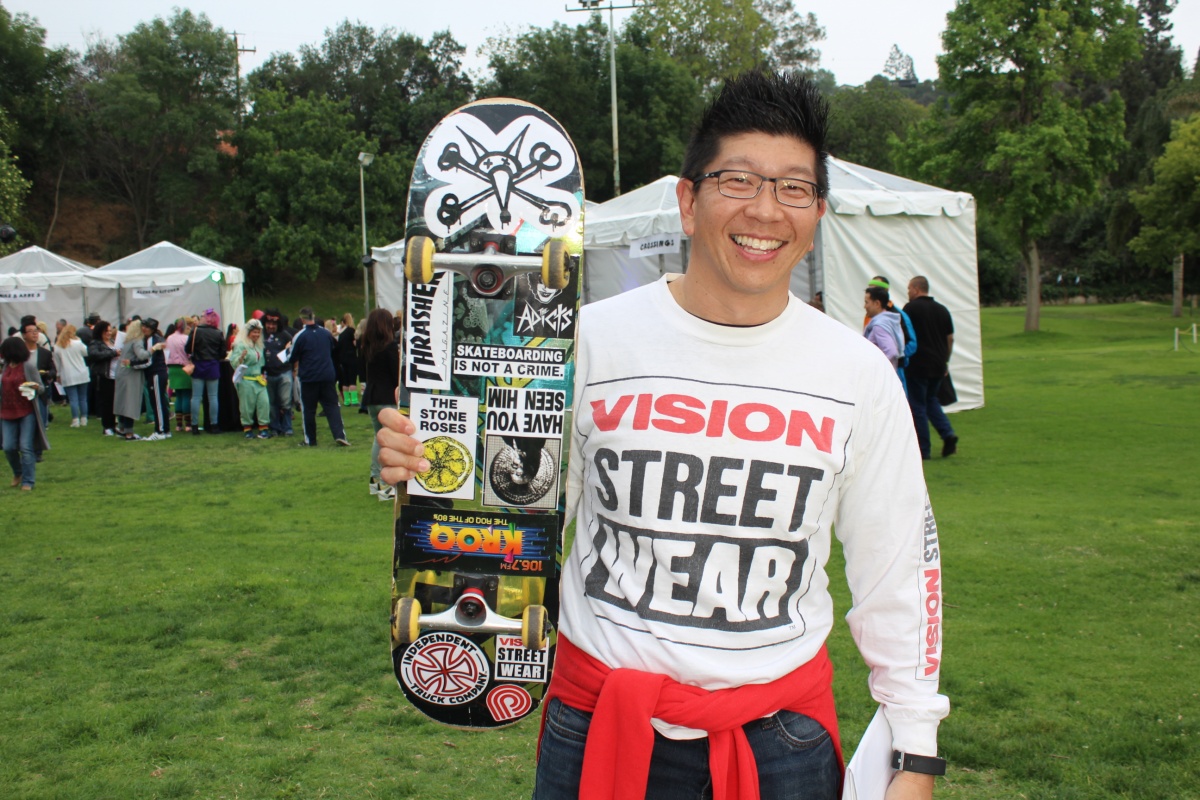 The totals are not in so SPEF officials cannot release financial figures for Saturday’s event but, according to Stacey Petersen, the organization’s CEO, the 2017 Parti raised about $125,000. Michel is hopeful that figure will be toppled.

She’s already calling herself “insane” for volunteering to chair next year’s event. “Yeah, I’m coming back to do it again,” she said. Michel and Abelson were also at the helm of 2017 Parti Gras. Abelson will not be returning, but will stay on to head up SPEF’s “Food for Thought” fundraiser, an event in which area restaurants donate a portion of one-night proceeds to the organization. 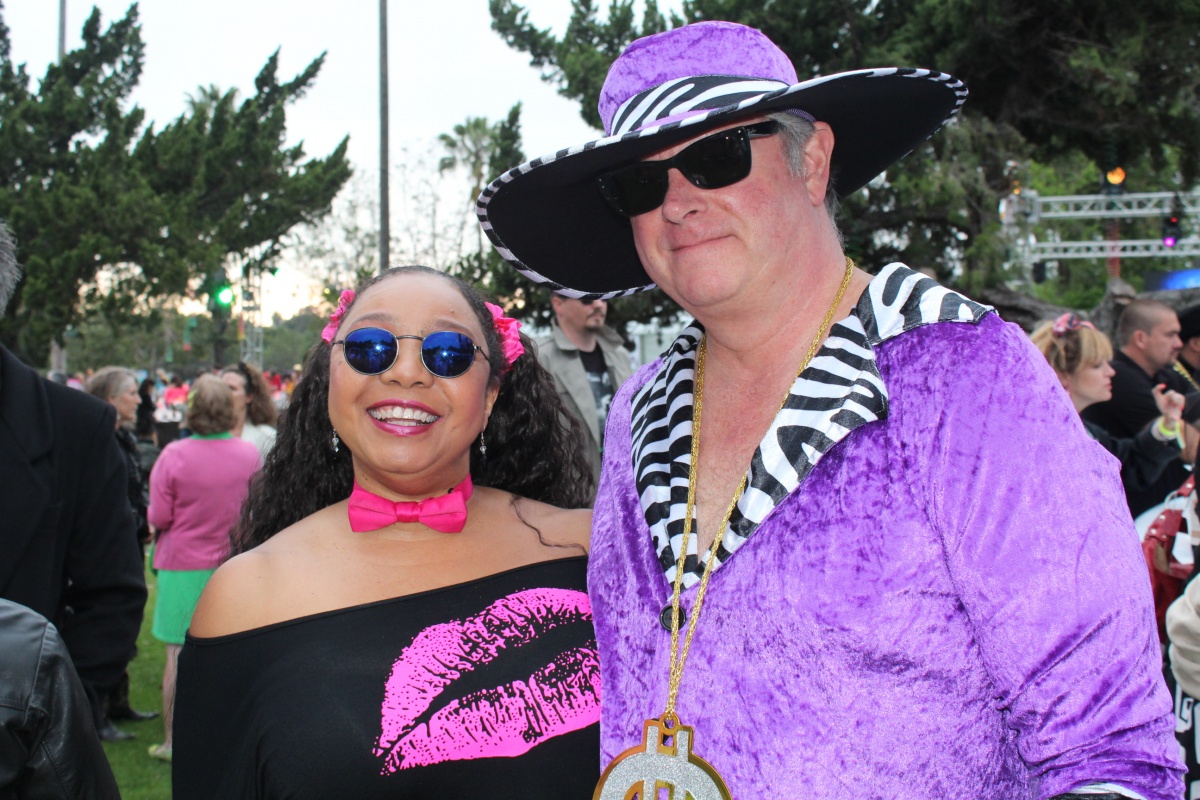 Those with ideas for the next Parti Gras are encouraged to email Petersen at www.SPEF4kids.org. 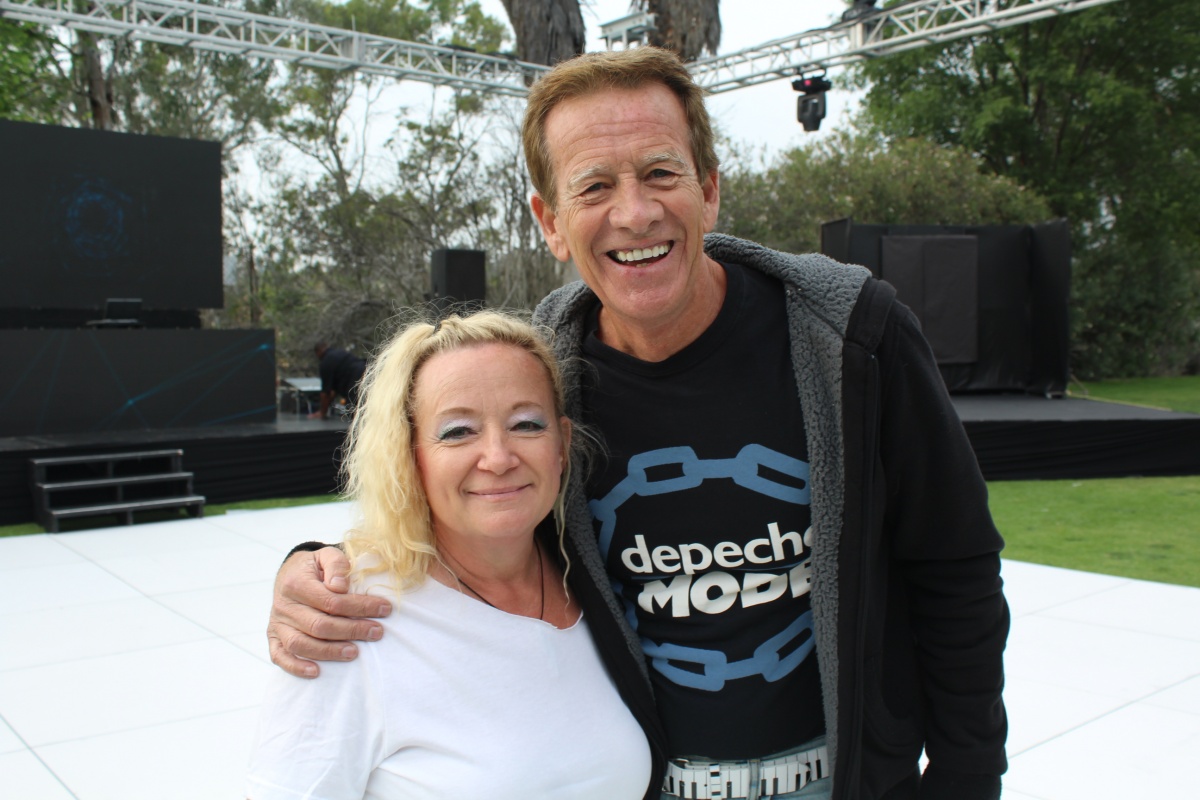 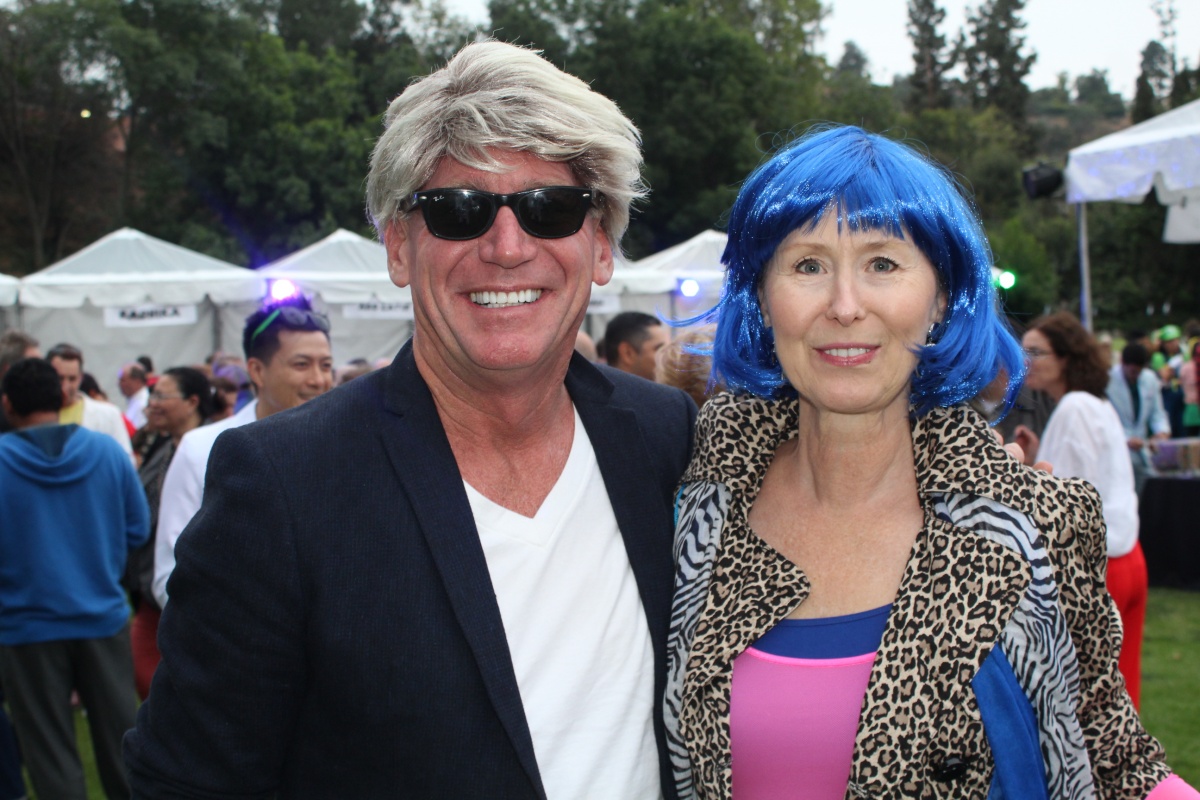 Michel said one Parti Gras attendee, a Tennessee resident, came all the way to South Pasadena just to see Blade work his magic.

Like the 80s themselves, Saturday’s party was “bad to the bone.” There were retro areas where guests could play arcade games and get a full “Flock of Seagulls” done to their hair in a pop-up salon on a most excellent night when everyone seemed to totally have a good time.

Those in the crowd enjoyed it to the max, chilled out and were highly stoked to be there.

Among those was Gitanjali Mohindra, who serves on the SPEF board and the Parti Gras committee. “There’s a feeling of community here and people just love it,” she said. “They enjoy coming out to support the schools, which are high achieving and great.” 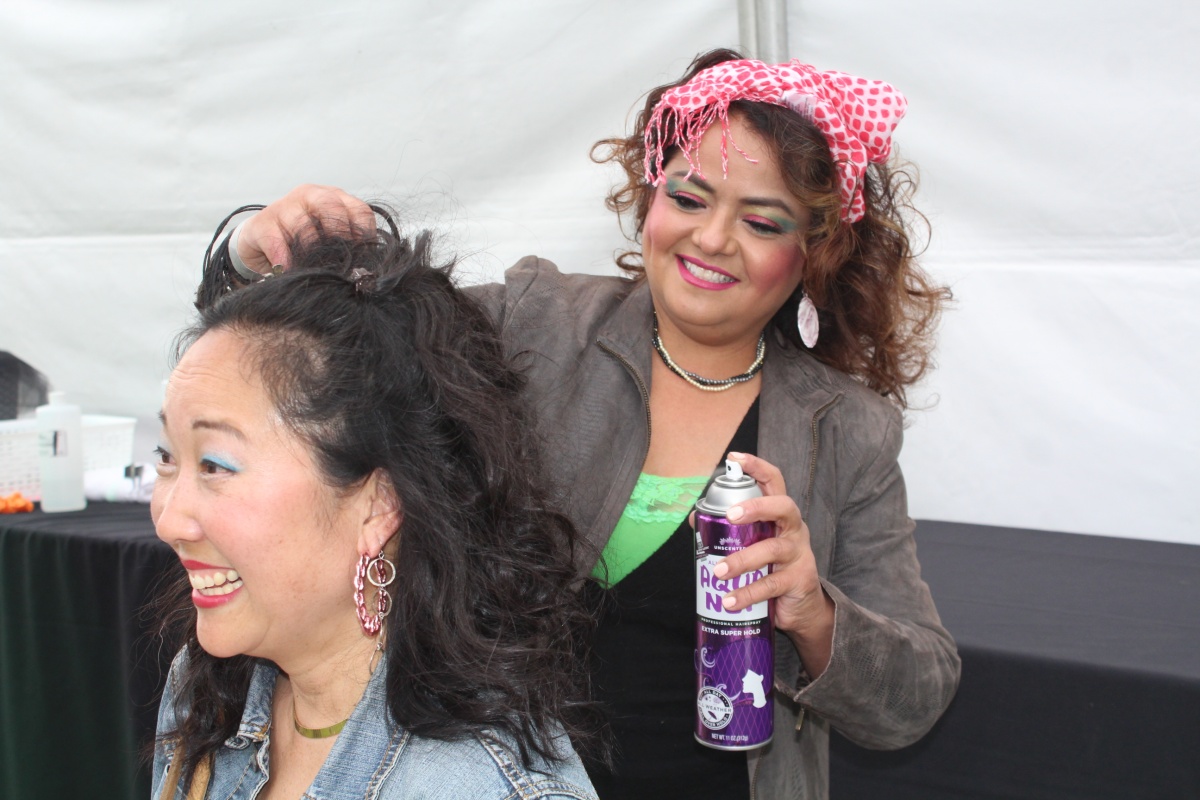 Mohindra called this year’s Parti Gras “a hoot” as she stood next to her husband, Gaurav, who came dressed as an 80s rocker. “This is a great fundraiser for the school district,” he said. “We grew up to Richard Blade, so I’m happy.”

Local restaurants were represented, serving guests samples from their menus. A silent and live auction with a wide variety of items on hand kept the focus on the importance of contributing financially to the cause, and Blade did his part by encouraging the crowd to dance late into the night. 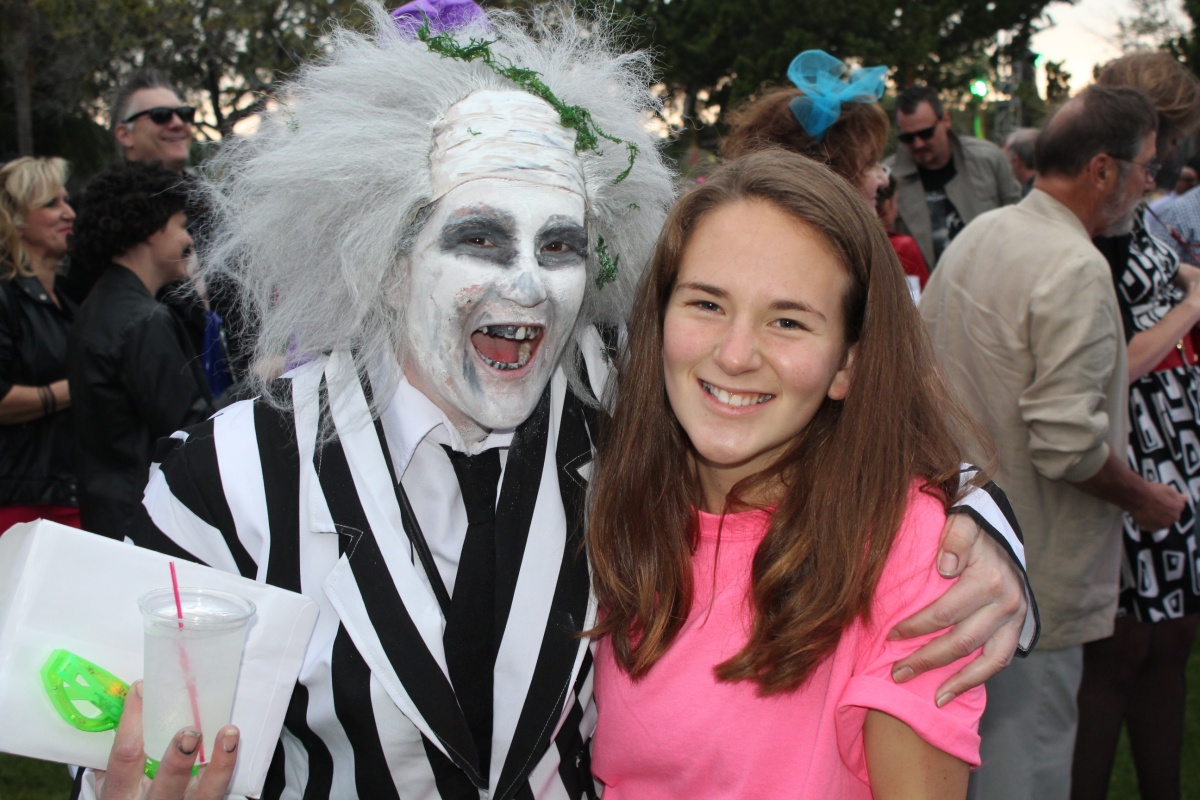 Dr. Mark Dreskin was joined by his wife, Dr. Marina Khubesrian,  South Pasadena City Council member, who had the big hair going in her effort to bring the 80s back into the spotlight. “The friends you normally see at the local schools are here enjoying the music, and they’re out there dancing,” explained Dreskin. “It’s like a costume party.”

For Khubesrian, “it’s fun getting out of your normal routine,” she said, “and dressing up for the occasion. SPEF does a phenomenal job. The fact that they’re all volunteers is amazing. With the ‘80s theme we really feel like we transformed into a different space.”

Cindi Knight enjoyed the transformation, just fine thank you. Clad in yellow and wearing a red DEVO energy dome, the SPEF board member, like others, said the idea of the entire “community coming out to support the kids” made this year’s Parti Gras special.

“SPEF raises so much money for the schools and we have fun doing it,” said a smiling Knight.

SPEF’s mission is to support educational excellence in the public schools – through fundraising and operation of enrichment programs. Its members are all on board with that message, recognizing the district has some of the finest schools in the state.

Gary Goodrich likes the idea that Parti Gras is “kind of the one community event that brings everyone together and makes a place like South Pas, although being small, feel even smaller, which is a good thing to me.” 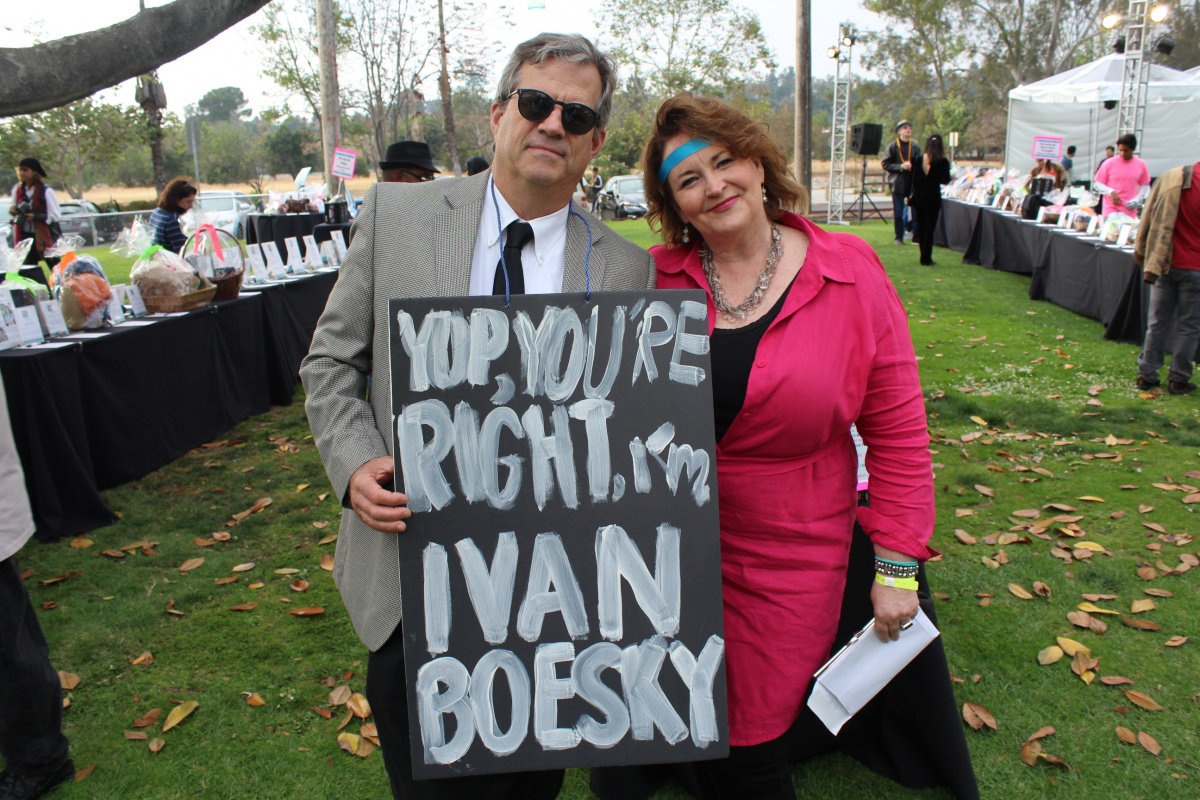 Ed Donnelly, a major force behind the D.U.D.E.S (Dads Uniting Dads in Education and Service), a men’s organization in town, which contributes mightily to the success of myriad events and functions, makes Parti Gras a yearly habit. “This is one time when we see everybody from all corners of the community come out and help SPEF raise money for the schools,” he said. “You’ll see people from all five (public) schools in the city, plus regular community members here, too. It’s a fantastic event because we all come together to chip in and help.”

Sam Park, a SPEF board member, attended his first-ever Parti Gras and came away feeling like it was a great get-together and grateful that so many demonstrated a passion to enhance a child’s education in South Pasadena.

Another local resident, Steven Lawes, along with his wife Gina, said the idea of having a place to go and be with other like-minded community members was “awesome.” Gina enjoyed “bumping into friends, reconnecting and having fun,” she said of her Parti Gras experience.

Dana Abelson, looking a little like singers Madonna and Cyndi Lauper, was all in for this year’s event with a chance to step back into the ‘80s. “For some of us, it was our coming of age, and for others it was coming into the age of independence,” explained Abelson, looking back on another time.

Dean Serwin, a former SPEF board member, attended his eighth Parti Gras. “It gets better and better,” he said. “It’s a fantastic event for the city. It’s the social event of the year in South Pasadena, getting together and celebrating our fantastic schools.”

Monterey Hills Elementary School teacher Ron Millar, who dressed as Joe Elliott, the lead singer of the English rock band Def Leppard, said Parti Gras is a time for everyone to “come out of their shells and raise a heck of a lot of money so our kids can have what’s not provided by the school district. It provides the resources for music, art, summer school and a lot more. We’re eternally grateful for all that SPEF does for our district.”

Camaraderie and seeing the community come together to advance the education of South Pasadena schools is what made Parti Gras a memorable evening for Steve Inzunza, who, along with his wife, Jaime, own Mamma’s Brick Oven Pizza in the city.

Longtime resident Steve Henson may have summed it up best, noting: “Events like Parti Gras are what make South Pasadena such a special place to live.” 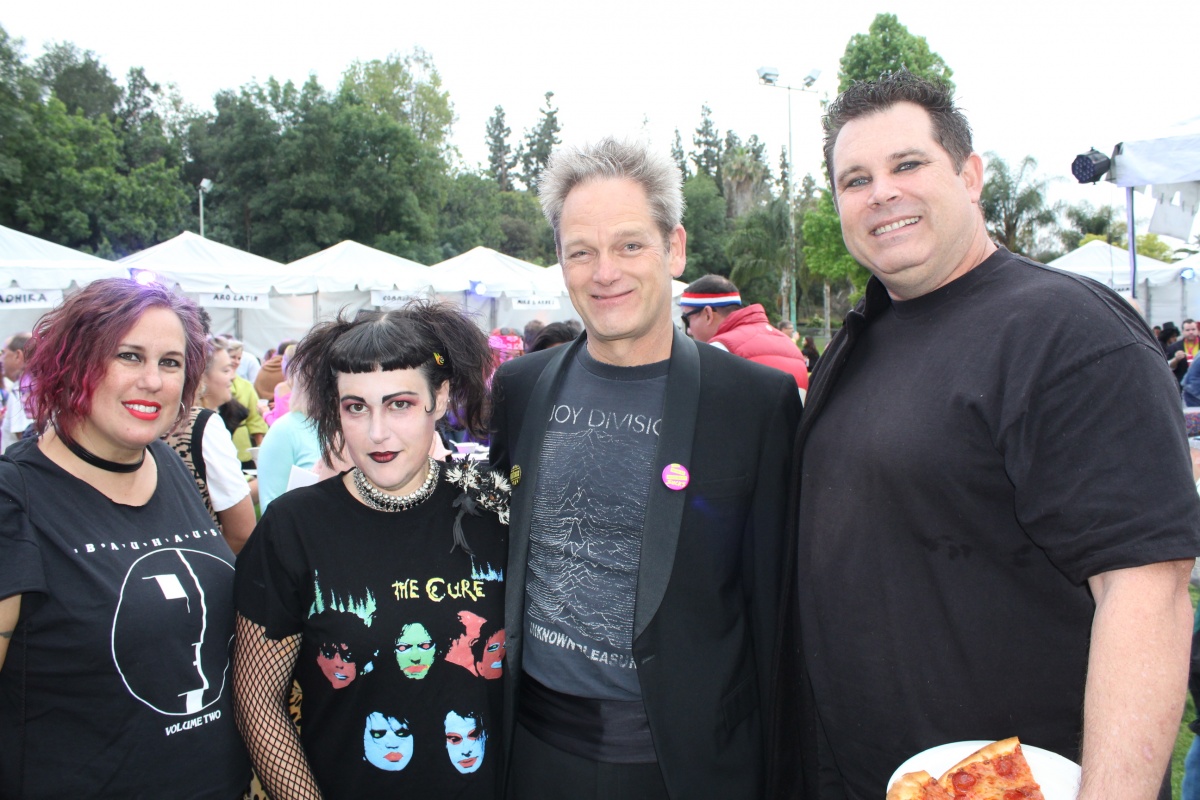