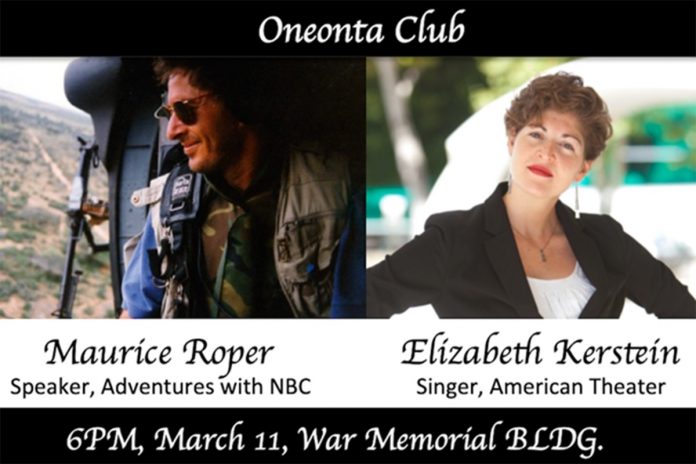 Maurice Roper, a professional photographer who has done much of his work with NBC, will be the guest speaker at the next Oneonta Club meeting.

The club also has a new home, making a departure from the Oneonta Congregational Church to now holding its monthly meetings at the War Memorial Building. The meeting gets underway at 6 p.m. Singer Elizabeth Kerstein will also highlight the musical portion of the program.

Roper’s topic will be of “Freedom,” as he will share his global perspective through a lens shaped by 40-plus years of adventures around the globe snapping photos.

His photo-journalism has captured some of the best and worst images in the world; visits with kings and queens and fascinating exchanges with many other notables and heads of state, such as Nelson Mandela, are counterbalanced by his penetrating documentary coverage of conflicts in Bosnia, Serbia, Kosovo, Iraq, and Lebanon, as well as genocide in Rwanda and Sarajevo.

Born a Kiwi, Maurice has lived in New Zealand, Australia and the U.S. He has a deep appreciation of America and the professional opportunities it has offered him, and is greatly impressed by the diverse population who call it home.

Kerstein performs with the Opera Santa Barbara Chorus and is faculty in the voice department at the California School for the Arts in the San Gabriel Valley. She was a big hit last year for the Oneonta Club’s Valentine’s Day dinner and earned the John Henry/ Albert Adams Music Award.

Kerstein, accompanied by pianist Lisa Edwards, returns to sing American Theater music that will pay tribute to the club’s heritage and spirit of camaraderie.