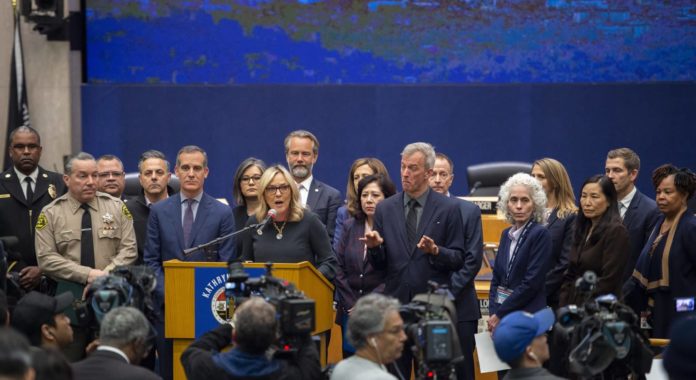 The order is designed is to enforce social distancing, keeping people away from one another to limit the spread of the virus. Health officials say there is nothing dangerous about going outside. The concern is in being close to other individuals who might be infected.

Going into effect Thursday at midnight, it’s the strictest measure of its kind in the United States, people being directed to stay in their homes and away from others as much as possible in a mindful move to curb the rapid spread of the deadly disease.

The Los Angeles order will be in effect until at least April 19. Business like museums, retail stores, malls and workplaces have all been ordered to stop operations. It only allows people to leave their home for essential activities like going to the doctor, picking up food, or simply taking a walk around the block. While it goes into effect at midnight Thursday, businesses will have one additional day to shut their doors.

Businesses not providing “essential” services must send workers home. Grocery stores, pharmacies, restaurants for delivery only and hardware stores will remain open. Most workers are ordered to stay home, with exceptions including police, fire and healthcare workers other emergency responders; and utility providers such as electricians, plumbers and sanitation workers.

In addition to the L.A. County order, Gov. Gavin Newsom ordered 40 million people to stay at home except for something absolutely necessary in light of the virus.

L.A. County and the state action follow their Bay Area counterparts that handed a similar “shelter-in-place.”

CLICK HERE FOR THE ENTIRE PDF DOCUMENT FROM LA COUNTY

A World Less Certain | The Purge

Letter to the Editor | A Plastic Free July