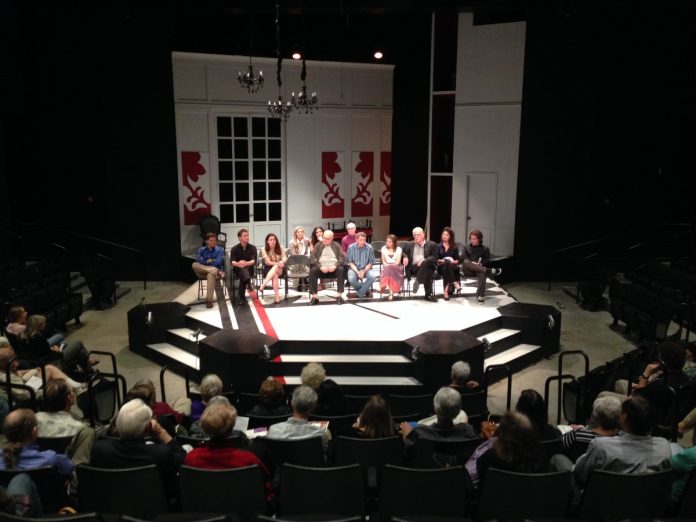 A Noise Within (ANW), the acclaimed classical repertory theatre, announces a staged reading of Nick Payne’s Constellations, presented by ANW Resident Artists as a part of their series Words Within and directed by Apollo Dukakis, on Monday, November 5 at 7pm.  Admission is free to the public; seats, however, can be reserved by calling 626-356-3100.

Constellations is part of Fulcrum Arts AxS Festival 2018, whose theme is City as Wunderkammer (Cabinet of Curiosities), taking place November 2-11 in Pasadena.  Information is at www.axsfestival.org.

The play addresses the idea that one word could alter the course of your life. Through a dizzying fugue of vignettes, audiences watch as Marianne (Erika Soto) and Roland (Rafael Goldstein)’s relationship unfolds across time and space, with each variation sending their relationship on an entirely new trajectory. Science and romance collide in this unusual love story that’s delighted audiences in New York and London.

Starting at 7pm prior to the reading, there will be an introduction by Professor Charles “Chip” T. Sebens of Caltech, who studies the philosophy of physics, focusing on the foundations of quantum mechanics and classical field theory; he will also head a short discussion of the reading with the Resident Artists just afterwards.

Constellations, a smart and provocative play, received rave reviews from The New York Times, saying, “Who knew that higher physics could be so sexy, so accessible — and so emotionally devastating? It may be the most sophisticated date play Broadway has seen.” It had its first production in London in 2012, and ran on Broadway in early 2015.

ANW’s Managing Director Michael Bateman said, “A Noise Within is delighted to contribute to Fulcrum Arts AxS Festival. Pasadena is, by reputation, a leader as a city of both arts and sciences. With resources like Caltech and JPL on our doorsteps, we have an amazing opportunity to bring the disciplines together and we feel honored that Pasadena artists and scientists have found this project to be a worthy venture. Presenting Constellations as part of the AxS Festival reaffirms our commitment as a contributor to Pasadena’s rich cultural landscape – we feel lucky to be a part of it.  We also advise the public to reserve tickets quickly, as our readings often sell out.”

Charles “Chip” T. Sebens uses tools from metaphysics and epistemology to assess competing proposals about what physical laws govern the quantum realm (such as Bohmian mechanics, Everettian quantum mechanics, and GRW theory). He also works towards improving our understanding of classical field theories, including our theories of the electromagnetic, Dirac, and gravitational fields. He is currently an assistant professor of philosophy at the California Institute of Technology (Caltech). As a student, he studied physics and philosophy at the Massachusetts Institute of Technology, the University of Oxford, and the University of Michigan. Before coming to Caltech, he was an assistant professor at the University of California, San Diego.

About AxS FESTIVAL 2018| City as Wunderkammer —

Fulcrum Arts presents 2018’s A×S Festival, a regional celebration of art and science, taking place from Friday, November 2 through Sunday, November 11, 2018. This year’s festival, entitled A×S Festival: City as Wunderkammer, will incorporate the concept of the “wunderkammer,” or “cabinet of curiosities,” as a model for exploring the intersection of art and science. While often described as occupying opposite ends of the spectrum, art and science are instead understood to be powerful engines of contemporary culture. This ongoing festival features exhibitions, performances, and educational programming. As a thematic pivoting point, A×S Festival provides opportunities for discovering the fascinations, curiosities, and tensions ignited by pondering integrations of art and science. Experience the 10-day festival in public spaces and online, in collaboration with a dozen locations including local science and cultural institutions as well as the festival’s own website. For more information, please visit https://axsfestival.org.

The festival will feature twelve programs comprising performances, lectures, exhibitions, and other events in partnership with A Noise Within, Armory Center for the Arts, ArtCenter College of Design, Carnegie Observatories, The Huntington Library, Mount Wilson Observatory, Pasadena City College, and Shumei Arts Council.  All but two festival programs are free.

Based in Pasadena, California, Fulcrum Arts empowers artists to invent, inspire, and provoke. The 501(c)(3) provides resources and opportunities for artists, collectives, and independent arts organizations to advance their visions and contribute to a vibrant, challenging, and inclusive creative community. The nonprofit advances the fields of art and science to impact culture on a national level through exhibitions, partnerships, interdisciplinary symposia and convenings, and residencies.

About A Noise Within

A Noise Within has been called “an oasis for those who love classic stories” by Los Angeles Times and is a leading regional producer based in Pasadena, CA. ANW’s award-winning resident company practices a rotating repertory model at their state-of-the-art, 283-seat performing space. This venue, established in 2011, has allowed ANW to expand its audience, surpassing its previous box office, subscription, and attendance records each year.