There’s a massive amount of talent coming to The Eclectic Music Festival in South Pasadena this year and among the brightest; Maureen and the Mercury 5. Blending Rockabilly, Blues and Swing in the same vein of Brian Setzer, Amy Winehouse and Imelda May, these cats are sure to have everybody dancing.

From playing everywhere inside and outside of Los Angeles to having some of their music aired on television, Maureen and the Mercury 5 are as hard working as they are prolific. You dancers out there, this is a must-see band and they’re definitely bringing some heat to Eclectic.

You can find their music here maureenandthemercury5.com and tons of their music on Spotify or Pandora. For more information on the Eclectic in South Pasadena this Saturday the 28th, please visit TheEclectic.rocks

I had the chance to speak to the titular Maureen and here’s what she had to say regarding The Eclectic, roots and the resurgence of Rockabilly and Swing. 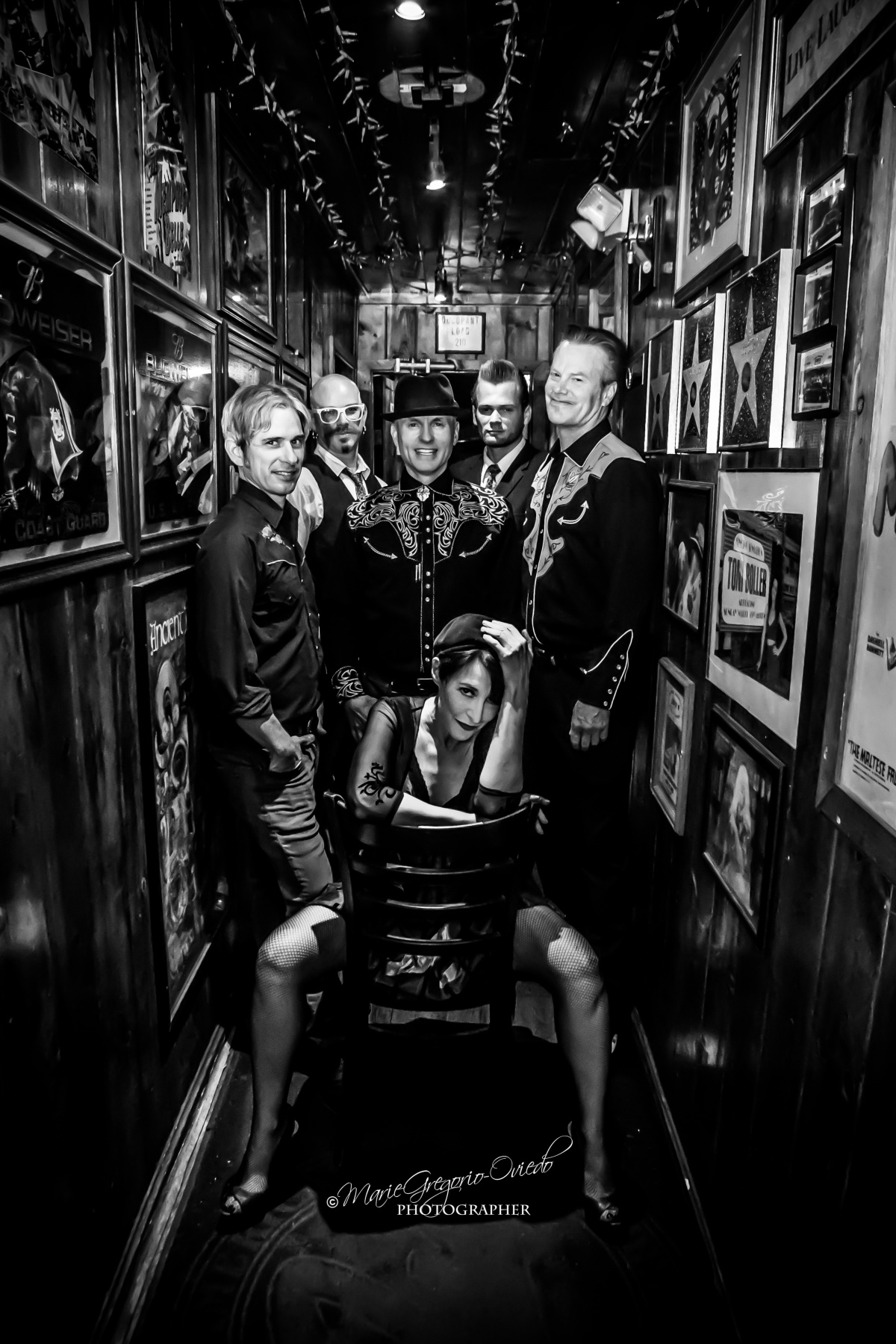 South Pasadenan: How did you guys start playing music together and where did the band name come from?

Maureen: Interesting thing, first of all the band name came from a contest we had on Facebook. A very sweet story, I was in a band called The Flutterbies and I was doing this this show in Noho- it was like a Noho arts district music and art walk kind of thing- and this guy named Mark Tortorici saw the band and he said “You’re really good, it looks like you dance or act or something. I get a performer vibe off you, I want to tell you about this place called Joe’s where I promote bands.”

“He really took an interest in me so he showed me the Swing scene- he brought me to Joe’s Great American Bar in Burbank which is now like my “Cheers”- it’s become my hang. He took me to like three different places and said ‘We have this Swing thing and you can take your love of Rock and Roll and Country music and dance.  “He kind of mentored me and became like my brother, sadly three years ago he died. All the time that I knew him since the inception of the band he was just always advising me helping with booking, booking us at Joe’s anytime we needed, anytime we wanted, booking us at festivals and just telling me where music was going and how rockabilly and swing was making a resurgence. Mark Tortorici, we called him ‘Torch’, was fairly young. Music makes you ageless, I like to say.”

“Torch knew everyone that used to dance at The Derby and  he got me into the scene and then I met a guy, Dave Bertiz, and he said “Yeah, you should definitely be singing rockabilly.” …and he helped me get some of the musicians together, we went through a few different changes and then eventually I got the amazing guys that I’ve been with for three years now.

Scott Mclean, whose nickname is “Seatbelt” because he has a band called Seatbelt too; everybody wants to play with Scotty. He’s on lead guitar. Sylvain played on the first record when we had different band members and he’s now our producer and he plays sax and rythum guitar and Steve was in the Flutterbies with me he’s the bass player. We’ve gone through two drummers and now I have the silliest man in the world – his name is T. Alex Budrow, the ‘T’ is silent.

We call him Alex but, you get who he is. We met because we taught at the School of Rock together. These are my guys! My brothers. This is my band forever and it’s hard because everyone has family, other bands that they play in and you go “nooo, my band!” So that’s how we became who we are now.”

South Pasadenan: Tell me about some of your favorite influences, what are some of those records you really like to listen to?

Maureen: “Well, you know what’s funny I don’t always listen to albums but, I listen to Pandora and that opens me up to people; between my students and Pandora I know what I love. I would say the people I listen to regularly are Burt Bacharach and Elvis Costello.

I love, love, love The Black Keys, I’m a rock and roll girl at heart and The Black Keys have just the right amount of blues and rock and it makes me so happy. I really like Buddy Miller. I got to work with Buddy and Julie Miller before I even knew who they were, I didn’t know they were famous! I was singing back-ups on a children’s album when I first moved to Los Angeles and I was barely out of conservatory out of New York and I got this job and I worked with Buddy and Julie Miller! Now they’re like my idols. They have a song that describes the perfect jangley, seduction guitar.

South Pasadenan: Tell me a little about your songwriting process.

Maureen: “It’s interesting because when I started the band I was writing with my Flutterbies partner Adam Daniels and Adam is very blues influenced, he’s very pop influenced too so we write good hooks together. He calls me on my stuff, he has the rhyming dictionary right there, he’s like “oh no, we can do better.” It started by Adam and I writing and now Sylvain and I have been writing a bit.

What I do is I get the ideas and you know I’m the lead singer so everything is from my point of view. I get the ideas, I do play keyboards and guitar and I get basic melody or a basic hook and then I bring it to Scotty. Scotty and Sylvain write the best hooks. Scotty and Sylvain write amazing hooks, then we arrange it as a band. Steve is concert trained, he trained on piano and bass, he and Sylvain are wonderful arrangers and Scotty knows Rockabilly. He met his wife at Viva Las Vegas, he’s there every year. Scotty is Rockabilly.

We have a new guy in the band named Jordan Bush who is going to play with us at the Eclectic Music Festival and he’s been a wonderful new influence too. He plays everything, he and Sylvain basically play sax and keys and guitar and bass and drums. They could be a one man band, these guys play everything. Jordan subs for Sylvain because Sylvain is also in a very famous band called “Beats Antique.” And Sylvain tours so Jordan is Sylvain’s second in command.

I’ve never met anyone as talented as these two guys, who can play all these instruments. So Jordan helps out with those hooks too and Jordan is based in like 1930’s or 1920’s banjo and guitar, old timey music. He likes the full revival stuff.

I’ve got a pretty amazing group of guys and everybody has something special to add to the song. We gotta keep our ear to the ground, I mean there is a new resurgence of rockabilly and swing now. We’re riding this wave, we’re ready for it, we’re prepared for it.” 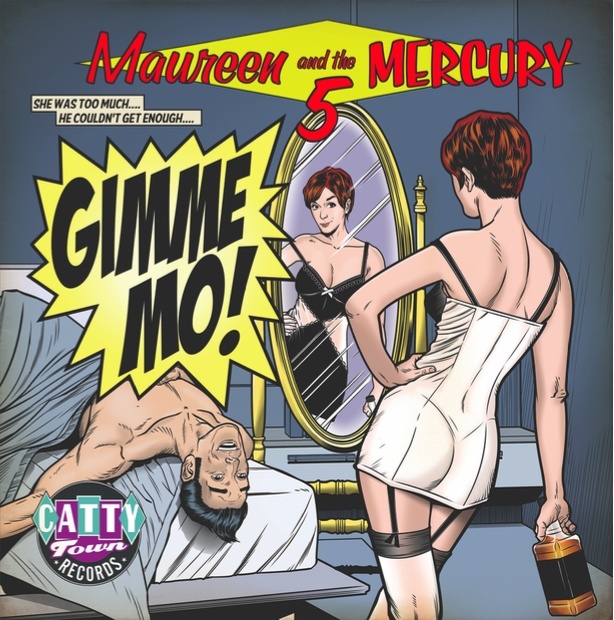 South Pasadenan: How did you guys end up getting involved with the Eclectic?

Maureen: “We’re just looking for places to play, I knew we wanted to play festivals because you know, it’s a great way to reach out to the fans and at many of these festivals you get new families, new fans. We’ve enjoyed five or six years at Downtown Disney now so we know the recipe for family entertainment.

We also know that when we go to the bars we can drink and swear. We are often booked at all ages because we will behave when we need to behave.”

South Pasadenan: Where can people find your music?

Maureen: All of our music is on Spotify, Itunes, CDBAby, Amazon, Amoeba, YouTube — wherever you buy music! We have a record deal with a European label called Catty Town — part of Rhythm Bomb Records. (Wild Records and Rhythm Bomb Records are the two labels you want to be on if you’re Rockabilly, Roots or Swing). Or look us up at www.maureenandthemercury5.com and come see us live!

For more rockabilly fun check out some videos and of course their music, I personally can’t wait to seem them shake, rattle and roll South Pasadena.