On Thursday, June 30 at 6:30 p.m. the public celebration of the Independence Day will preliminarily kick off in South Pasadena when the Colburn School Adult Wind Symphony performs a free patriotic concert in the Library Park. During the last two years on the Thursday evenings before Independence Day, the Colburn Adult Wind Symphony unleashed rousing performances before enthusiastic Library Park audiences.

This year the highly accomplished musicians will again play for about an hour right outside the Library Community Room at 1115 El Centro Street. They are expected to play 14 rollicking selections including “Honey Boys on Parade” by Cupero & Bourgeois, “The Chimes of Liberty” by Schissel, “Raiders March” by Williams, and such John Philip Sousa favorites as “Jack Tar March,” “Semper Fidelis,” “The Invincible Eagle,” Hands Across the Sea,” and ,of course, Stars and Stripes Forever.”

No tickets or reservations are necessary and audience members are invited to bring picnic food and blankets or folding chairs. The South Pasadena Farmers Market, a mere block to the west, offers its own wide variety of delicious food options.

The Colburn School Adult Wind Symphony performs traditional and contemporary works. The 50-piece concert band led by Dennis Zeisler, a Board member of the John Philip Sousa Foundation, is a powerful, sophisticated ensemble of woodwind, brass and percussion players. They have delighted Los Angeles-area outdoor concert-goers for years. The renowned teachers, performers, and scholars that make up Colburn’s dedicated faculty serve as invaluable mentors to guide students’ artistic development. 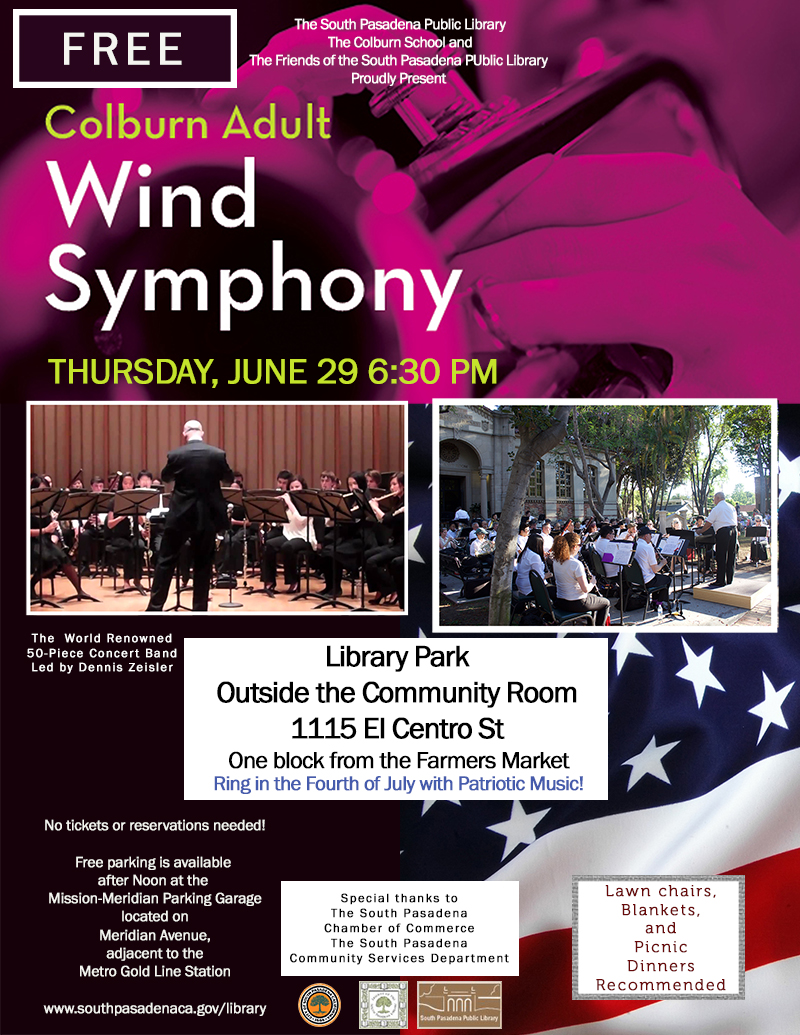 At 5:30 p.m., the 35th Anniversary of the Friends Bookstore will be celebrated inside the Library, right outside the Bookstore on the second floor. It will feature the unveiling of the new bronze plaque recognizing the ‘Fabulous Four’ Founders of the Bookstore: Dorothy Cohen, Bev Engler, Sally Swan, and Margaret Wallace. Dorothy and Margaret will be in attendance. The ceremony will celebrate the long-running success of the 7-day per week, all volunteer Book Store which has raised about $1.2 million. It will include brief remarks by dignitaries and birthday cake.