As a child I grew up eating Fosselman’s ice cream almost every day, to the envy of my friends. Our freezer was always packed with Chocolate Chip, Dutch Chocolate or the newest flavor my my dad or uncles dreamed up like Macapuno or English Toffee. I didn’t realize then, as a child, how special it is to have a family business, especially, one that has endured for 100 years. 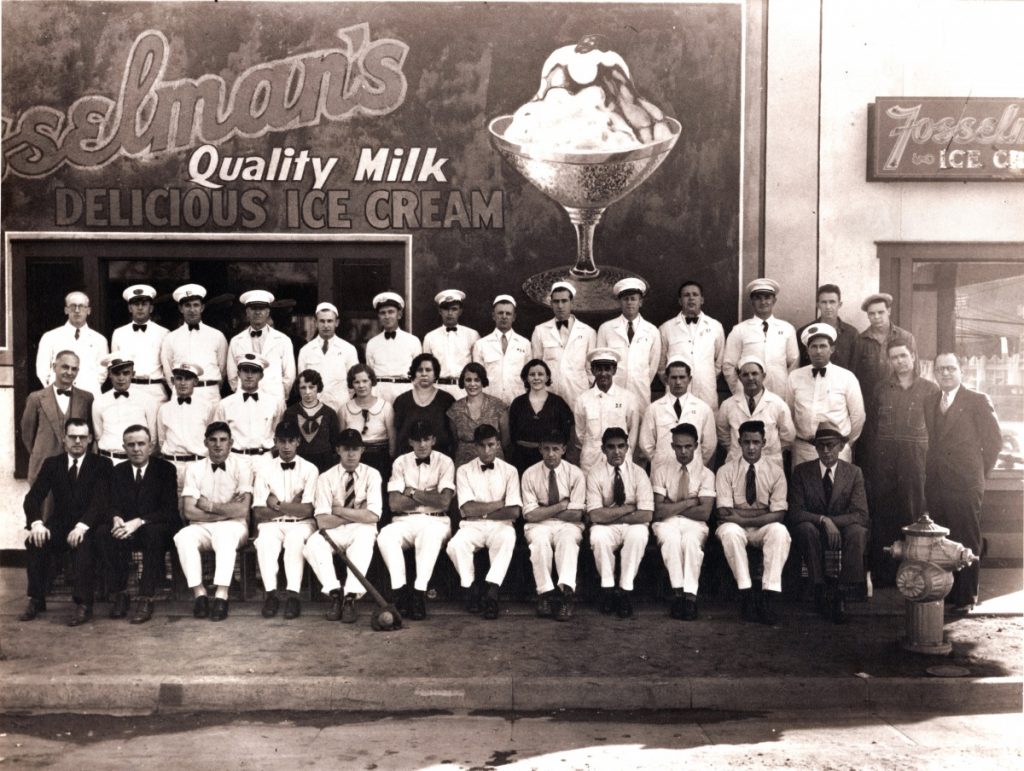 In 1883, my great-grandfather, Peter Fosselman, built the Fosselman Brewery in Waverly, Iowa. In 1890, the brewery started bottling soft drinks due to Iowa’s prohibition laws. The Fosselman Brewery then became known as the Waverly Bottling Works, where “temperance” drinks like ginger ale, soda waters, root beer, and lemon sours were made.

Peter’s son, Christian Anthony (C.A.) Fosselman, had his first taste of ice cream at a “bottlers convention” in Toronto, Canada, where he came across an ice cream making machine. He ended up buying it, and began making ice cream in 1910, adding a new product to its already successful soft drink business.

C.A. Fosselman, officially founded Fosselman’s, Inc., in Waverly, Iowa, in 1919, before the advent of refrigeration. Resourceful as he was, he harvested ice from the frozen Cedar Rapids river during the winter months and kept the ice in “ice houses” to keep the creamy product cold during the hot summer months. Once refrigeration become a reality, my grandfather moved his family of 9 to Southern California in 1924 where he could sell ice cream year round. He relocated his business and family to Pasadena, where Fosselman’s Creamery took root as a dairy, providing milk, butter, cream, and ice cream to growing families in the San Gabriel Valley.

The Fosselman Creamery office once resided on Fair Oaks where Gales Restaurant now is today. Fosselman’s Creamery had a fleet of trucks that made deliveries weekly. Once the Great Depression hit, my grandfather sold his wholesale creamery business and decided to focus solely on ice cream.

In 1937, C.A. opened the first Fosselman’s Ice Cream store in South Pasadena. Bill Fosselman, his son, ran the shop with the exception of when he served in World War II. Bill met his wife, Mary, who started waitressing at the store in 1939 for 25 cents an hour. Mary, who is 97 years old, still remembers her father-in-law with great affection.

“I loved him. He was very nice. He was there at the South Pasadena store making ice cream. I thought a lot about him.  A real fine man,” said Mary Fosselman, who still resides in South Pasadena today.

Mary, who managed the shop while Bill served in World War II, recalls the store being “busy” all the time.

“On Fridays, after the high school football games, everyone would crowd into the shop. During weekdays they had sandwiches for the business people. City Hall designated the back booth to discuss city matters,” said Mary.

In 1974 the South Pasadena store closed.

“It was a sad day for the community,” said Mary Fosselman.

A bronze plaque commemorating Fosselman’s Ice Cream resides on the sidewalk at 1515 Mission Street. The plaque was designed by Kate Fosselman-Jarvis, daughter of Jim Fosselman.

Additional Fosselman stores were opended in Glendale and Temple City as well, but the only retail location open today is in Alhambra where third generation owners and brothers, Chris and John Fosselman, run the manufactuing, wholesale, and retail business today.

Chris and John began working with their father, Bob, and their two uncles, Jim and Bill, at the Alhambra plant and then officially took the reigns of Fosselman’s Ice Cream when they bought their father and uncles out of the business in 1989.

Stay tuned for Julie’s next installment of Fosselman’s Centennial story on what the new generation of Fosselman’s is doing now, and how it plans to celebrate its 100th Anniversary.

A pictoral history of Fosselman's Ice Cream
1 of 8