The El Capitan Theatre General Manager Ed Collins said, “Disney created an instant classic with the original release of ‘The Lion King’ in 1994 and its popularity has never wavered. We are thrilled to offer a whole new way to enjoy this beloved Disney film at The El Capitan Theatre. Who can resist singing along to such unforgettable songs as “Hakuna Matata,” “Can You Feel The Love Tonight” and “Circle of Life”? “THE LION KING SING-ALONG” will also include a special live appearance by Timon on The El Capitan Theatre stage before every show. There is simply no better way to experience the laughter, music and majesty of this Disney masterpiece.”

ENJOY BREAKFAST PROVIDED BY MEL’S DRIVE-IN (HOLLYWOOD) & MEET TIMON PLUS RECEIVE A COMMEMORATIVE PHOTO AND A COMPLIMENTARY DIGITAL DOWNLOAD OF THE LION KING ON DISNEY MOVIES ANYWHERE!* (c) 2017 Disney. Each ticket package includes: Reserved Seat (no concessions) to see the movie at The El Capitan Theatre, and a meal from Mel’s Drive-In served at the theatre. Advanced Reservations and Ticket Purchase Required (tickets must be booked no later than 24 hrs business days).

The El Capitan Theatre will also host a very special Tiny Tot Tuesday with Raffle Prizes Tuesday, August 8 and Tuesday, August 15 at 10:00AM during the run of “THE LION KING SING-ALONG”. During these special screenings, parents and small children may enjoy the movie in a tot-friendly way—with lights dimmed rather than out and reduced sound levels.

*Only one code per reservation while supplies last. Each qualifying transaction must include both movie tickets and breakfast tickets for each person in their party attending the same show on the same date and showtime to see The Lion King Sing-Along at the El Capitan Theatre August 4th – 20th, 2017. Code expires August 21, 2018. Code will only be provided to person whose name is listed on the reservation. DisneyMoviesAnwhere.com membership required to unlock your digital movie. Disney Movies Anywhere is open to U.S. residents ages 13+. Visit DisneyMoviesAnywhere.com for complete details and terms of conditions. This offer is subject to change without notice. Void where prohibited. Offer expires August 20, 2017.

ABOUT “THE LION KING SING-ALONG”
An unforgettable story, breathtaking animation, beloved characters and award-winning music sets the stage for “THE LION KING SING-ALONG”, a Disney classic that follows the adventures of Simba, the feisty lion cub who “just can’t wait to be king.” But his envious Uncle Scar has plans for his own ascent to the throne, and he forces Simba’s exile from the kingdom. Alone and adrift, Simba soon joins the escapades of a hilarious meerkat named Timon and his warmhearted warthog pal, Pumbaa. Adopting their carefree lifestyle of “Hakuna Matata,” Simba ignores his real responsibilities until he realizes his destiny and returns to the Pride Lands to claim his place in the “Circle of Life.” The all-star vocal talents—including Matthew Broderick, Nathan Lane, Whoopi Goldberg, James Earl Jones, Jeremy Irons, Ernie Sabella, Jonathan Taylor Thomas, Robert Guillaume, Cheech Marin and Moira Kelly—rip-roaring comedy and uplifting messages of courage, loyalty and hope make this a timeless tale for all ages. Produced by Don Hahn and directed by Roger Allers and Rob Minkoff from a script by Irene Mecchi, Jonathan Roberts and Linda Woolverton.

ABOUT THE EL CAPITAN THEATRE

Declared a Historic Cultural Monument by the City of Los Angeles and restored to showcase its original lavish architecture, The El Capitan Theatre has been since 1991 an exclusive first run theatre, equipped with state-of-the-art technology, for The Walt Disney Studios. The theatre also hosts live stage shows, world premieres, special events, and screenings of classic Disney films.

In 1989, the Walt Disney Company joined forces with Pacific Theatres and launched a two-year, museum quality restoration of The El Capitan, led by renowned theatre designer Joseph J. Musil. Musil with the supervision of the National Park Service’s Department of the Interior, and guidance from conservator Martin Weil and architect Ed Fields, achieved the goal recreating the original 1926 look and feel — including original design elements such as the ornate plasterwork found hidden behind walls and the opera boxes in the main auditorium. 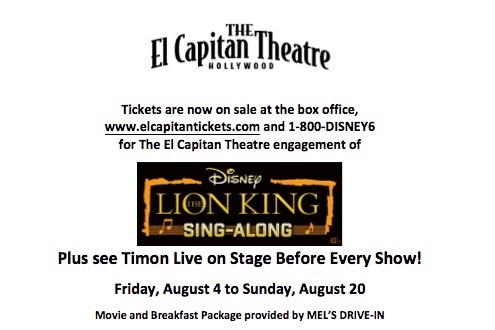