On May 2, 2018, a student walked around the South Pasadena High School campus wearing a cape picturing a semi-automatic rifle.

At South Pasadena Unified School District, student safety is our primary concern. Anytime a symbol is presented on campus that could potentially intimidate or scare people, administrators will investigate. If the symbol or activity disrupts the educational process for other students, then the student(s) involved will be called in to discuss the matter.

During this incident, SPHS school procedures and education code were followed. The student proceeded with a planned march, which had been discussed with the administration over the course of several months, and he chose to remove the cape for the remainder of the school day. Upon request, the student voluntarily turned in his phone, which was not searched by administrators. The student made a recording on a different device without the knowledge or consent of administrators.

A South Pasadena High School Student wears an AR-15 silhouette graphic flag on his back during break-time at school and is then brought into principal’s office for questioning. 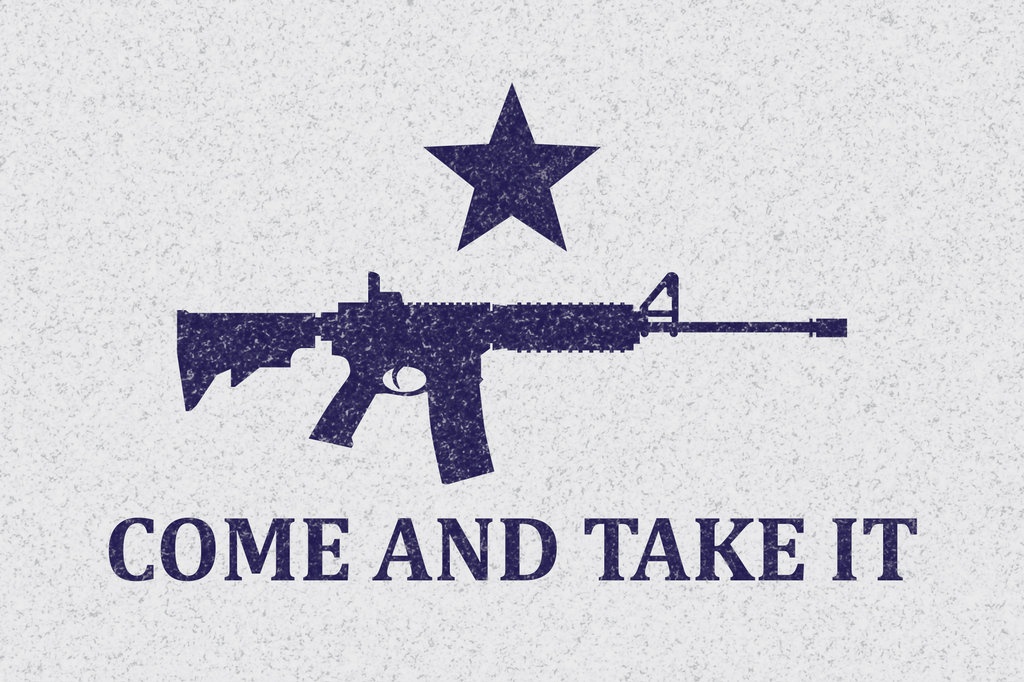 The information in this news report is summarized from a recording made by the student during the interaction.  We are investigating more facts from SPUSD at this time.

A South Pasadena High School student was seen wearing a flag draped over the shoulders like a small cape with a graphic that depicted what looked to be an AR-15 silhouette and text that said ‘Come and Take It’.  The student was brought into the principal’s office for questioning.

CORRECTED via SPUSD STATEMENT: Upon request, the student voluntarily turned in his phone, which was not searched by administrators. The student made a recording on a different device without the knowledge or consent of administrators.

ORIGINAL REPORT: The student recorded the entire interaction from his cell phone in his pocket.  It can be heard in the recording that the student answered honestly about having the phone in the pants pocket when asked by administrators. The recording abruptly ended at this point. It’s unclear at this time what happened after that.  SPHS Principal Anderson was not available for an interview at the time of this report.

The reason the student gave to the high school principal and other administrators was to show support for second amendment gun rights.

While it was apparent from the recording that the principal and other administrators did not agree with the student’s protest and 2nd amendment support method, the student was released back to school activities after a few words of advice.

The main argument the school administrator cited was the SPHS dress code: “…intrude upon the rights of others to a comfortable school setting.”  and “Those bearing connotations of violence.” The student did not agree.  The flag was not taken away and the student was allowed to return to class under the condition that the flag/cape would not be worn during any instructional time.

The South Pasadena High School Dress Code is designed to ensure a focused learning environment on campus that fosters physical cleanliness and mutual respect amongst students and staff. Self-expression in dress is encouraged on campus but must be limited where it may intrude upon the rights of others to a comfortable school setting. The Code is also designed to present a consistent image of South Pasadena High School as a place of learning.

What must be covered:

The Bottom Line: A hand’s length below the bottom of the buttocks

When the body is standing straight, clothing (any combination of tops and bottoms) must extend from armpit level to the Bottom Line, front and back. No skin must been seen within this range. Bare midriffs are prohibited. Sheer clothing must be worn accordingly:

Where the Dress Code is in effect:

Dress requirements for formal dances will vary slightly from the school dress code. Student dress violations at all other functions will result in denied access.

Students are expected to know the provisions of the Dress Code. Therefore violators will be subject to the following progression of penalties without previous warning:

The student is assigned Saturday School (4 Hours) and the student’s parents are notified by the Student Services Office.

Loaner Policy: Loaner clothes must be returned to Student Services by 8:00 am the following school day. Clothes must be washed before being returned. If a student fails to return the clothes, he/she will be assigned Saturday School.