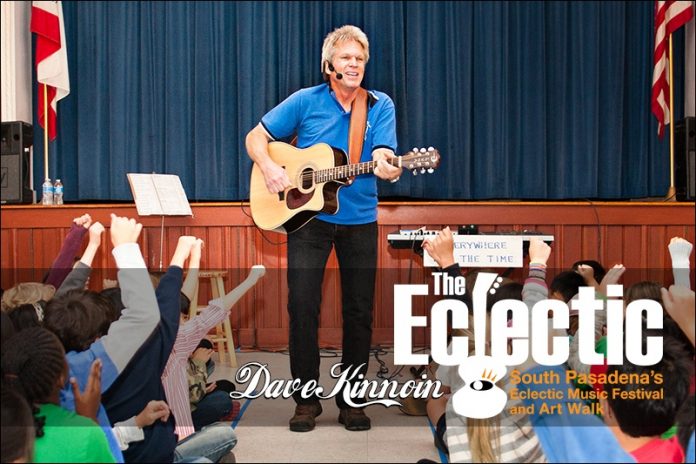 Families are invited to Dave Kinnoin’s children’s concert on Saturday, April 28, 2018 at 4:00 PM in the South Pasadena Public Library Community Room located at 1115 El Centro Street in South Pasadena. Dave is second in the “Library Carnegie Stage” offerings of the Eclectic Music Festival, which will feature performance venues throughout South Pasadena on April 28.

The best way to describe a Dave Kinnoin concert is in the words of those who have seen one: “inspired silliness,” “wild & wonderful,” “laughter,” “wacky, clever and bright,” “an unmistakable sound,” “heart and soul,” “genuine enthusiasm,” “gusto and guts,” “moves kids to action.” LA Parent Magazine notes “Dave connects instantly with his audience and sustains it by genuinely enjoying himself.”

Dave begins with a bang and keeps on poppin’ with boundless energy, decades of experience and a sparkling love for kids. The kids are not just watching the concert, they are part of the concert as Dave enthusiastically encourages all to join in throughout. And like a favorite cookie, every concert has a surprise in the middle: Dave and the kids make up a brand-new song! Sometimes poignant, often hilarious, these spontaneous creations make us believe that there is something new under the sun. Kids – and their parents – have a rousing good time and get fired up to express themselves.
Dave Kinnoin is one of the hardest-working artists in children’s music. Chances are if you’ve enjoyed songs by Mickey Mouse, Kermit the Frog, Winnie the Pooh, Bear in the Big Blue House, Big Bird, Yertyl the Turtle, Ariel, Jasmine, Belle, Sebastian the Crab, and Larry the Cucumber, you know Dave Kinnoin. Dave has written songs for some of the most beloved characters in movies and on television.
In addition to writing for his friends, he has released eight solo albums, two Randy & Dave albums and one by Grin Brigade; has been honored with dozens of awards and tours nationally to enthusiastic audiences.

His acclaimed partnership with GRAMMY-winning songwriter Randy Sharp, Randy & Dave, has produced two CDs, Calling All the Elephants and Life on a Trampoline, collectively honored with 11 national awards, including Parents’ Choice Gold and NAPPA Gold, landed on several prestigious Top 10 lists and received rave reviews. Their new CD, Snorkel, is due out May 2018.

For more information about the Eclectic Music Festival, check out the website at www.theeclecticrocks.