From William J. Kelly | Letter to the Editor

As the City of South Pasadena begins discussing some combination of higher taxes and fees and service cuts to head off a recently projected budget deficit, city hall needs to present a fuller and more robust analysis to the community.

One major problem with the general fund projection presented to the City Council March 6 is that it includes general fund spending on capital projects that’s mysteriously 49 percent greater than what was outlined as needed under the city’s capital improvement plan.

That plan was approved by the City Council just last June and City Manager Stephanie DeWolfe says it’s the basis for the capital projects line item in the more recent general fund projection. However, it calls for just $8.2 million of general fund spending over six years, with most of the projects outlined paid for by gas taxes returned to the city, water rates, and other sources of revenue, not the general fund.

However, the March 6 general fund projection calls for $12.2 million of general fund spending on capital projects over the same period, marking an increase of $4 million.

Meanwhile, the same general fund projection says that the cumulative budget deficit over the period will be $3.6 million.

Effectively, eliminating the unexplained $4 million increase in general fund spending for capital projects and instead following last June’s capital improvement plan as a guide would seem to eliminate any coming budget deficit.

It could well be there are legitimate reasons for the increase for capital projects, however, city staff so far has been unable to make any case for the increase or even explain where the most recent figures came from.

This is in spite of statements that the budget and financial planning process will involve a high level of community involvement, ostensibly aimed at assuring transparency and give-and-take in city decision-making.

At a minimum, city staff must explain how the need for general fund spending on capital projects over the years ahead grew by 49 percent in just nine months.

Moreover, to make a more robust case for revenue enhancements, city staff also should lay out the assumptions behind their five-year general fund forecast, explaining for instance, what economic projections were used to estimate future revenue. City Finance Director Craig Koehler would only say that the assumptions were conservative when asked about the basis for the projections.

However, it is common for budgets to show best-, worst-, and mid-case projections for future revenue based on the potential range of economic conditions the future may bring. Instead, the city simply has single numbers for expected revenue in each year in the general fund forecast.

Let’s face it South Pasadenans generally have been supportive of revenue measures and of trying to maintain a full array of city services. However, local fees and taxes are an increasing burden for many.

That’s why it’s so important for the city staff to provide full information to the community and engage in an open give-and-take process. Ducking hard questions constitutes an inauspicious start to the process and residents deserve better.

William J. Kelly is a member of the City of South Pasadena Natural Resources & Environmental Commission and has served on other city committees. He is a local journalist. 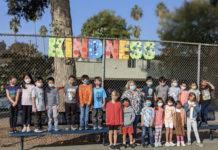 Arroyo Vista Elementary | Giving Back to the Community