BARK continues at The Barkley in South Pasadena every Wednesday at 8pm. Organized by local comedian, Vance Sanders, BARK is an evening of stand-up with changing comedians each week.

It all started when Sanders organized a group of stand-up comedian friends to do comedy shows on Wednesday nights at The Barkley in South Pasadena. It starts at 8pm and features 7 comics doing about 8-10 minutes of comedy. Zach Galifianakis did Bark a couple of months ago. Galifianakis had done shows at Peterson’s back before he was a huge star and, like most comedians, he likes to come back and do stand-up when he can. Sanders invited him and Galifianakis said he was free and could do it. So he showed up with his shy friend in a baseball cap (it was Jon Hamm) and Sanders says he killed.

The Barkley is located at 1400 Huntington Drive at the corner of Huntington and Fremont in South Pasadena. Bark happens every Wednesday at 8pm. No cover charge, no drink minimum. 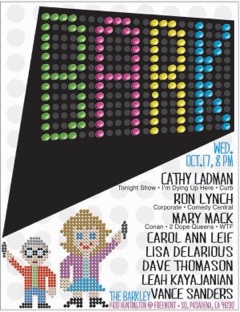