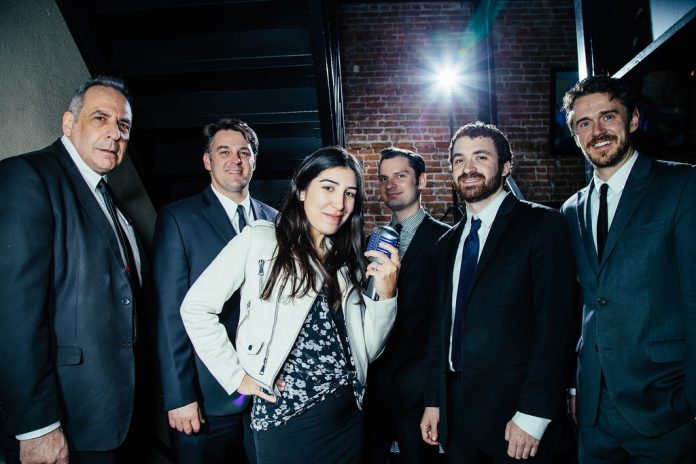 Angel Town Combo is touted as LA’s premiere jazz, ska, soul group who transcend musical boundaries with a fun, upbeat experience thrilling people of all backgrounds and musical tastes. The band brings stellar musicianship and a pure love for music to every performance.  Each member is an artist in their own right, including renowned band leader and drummer Mark San Filippo.

As one of the top, first call bands in and around the Los Angeles music scene, their distinct, versatile and eclectic sound promises an unforgettable evening of toe tapping groove! Their debut album, Angel Town Combo – Live in Hollywood was released in 2017 and is available at www.AngelTownCombo.com.

Angel Town Combo formed in Los Angeles in 2013 under the direction of drummer Mark San Filippo and has been performing soulful, uplifting music all over SoCal ever since. After years of professional experience touring the world in various projects, they are equally comfortable performing at festivals, concert venues, private events, nightclubs and in the recording studio. Reminiscent of a classic, late-night talk-show band, Angel Town Combo is completely versatile, and capable of playing a wide variety of styles and settings.

Their live performances typically feature an eclectic mix of improvisational styles including Soul Jazz, Ska, Stax, Surf Rock, Straight Ahead Jazz, Be-Bop, Blues, Hard Bop, Swing and Soul. They were the featured band at the KJAZZ Wine & Jazz Summer Concert Series at Hollywood and Highland on July 5th, 2016, and they’re thrilled to be a featured band at South Pasadena’s Eclectic Music Festival in 2018.

Visit theeclectic.rocks for the full lineup, maps and all things Eclectic!