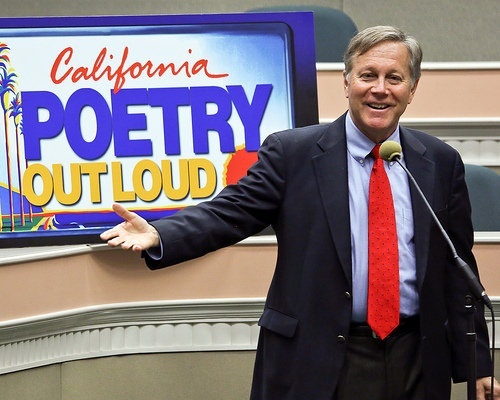 A ‘Poetic Doubleheader’ with nationally acclaimed authors Dana Gioia and Ron Koertge will be presented on Friday, May 11 at 7:00 p.m. in the South Pasadena Public Library Community Room. The free event will not only showcase the two remarkable poets reading their works, but will also feature lively, complementary video presentations as well.

Dana Gioia is the California State Poet Laureate and a South Pasadena resident. From 2003 to 2009, he served as Chairman of the National Endowment for the Arts, and he has been the USC Judge Widney Professor of Poetry and Public Culture since 2011. Gioia is the 2018 winner of the Poets’ Prize for “99 Poems: New & Selected”, published by Graywolf Press in hardcover in 2016 and released in paperback in 2017. The Poets’ Prize is awarded annually by a committee of 20 poets to the “best book of verse published by an American during the preceding year.”

Ever since Governor Jerry Brown appointed Dana Gioia to be the California Poet Laureate in 2015, the writer has been on an odyssey. After accepting the post, Gioia vowed to personally deliver live poetry events for all ages to all of California’s counties. With missionary zeal, Gioia has already presented successful poetry gatherings in almost all of California’s 58 counties. A video showing highlights from a sampling of Dana’s poetry whistlestops will be screened during the ‘Poetic Doubleheader’ in South Pasadena.

Nationally honored writer Ron Koertge lives in South Pasadena. Ron is also the author of many celebrated novels, including Stoner & Spaz, Strays, and The Brimstone Journals, all American Library Association (ALA) Best Books for Young Adults; Shakespeare Bats Cleanup, an ALA Top Ten Sports Books for Youth Selection; and The Arizona Kid, an ALA pick for “one of the ten funniest books of the year.” He’s also a two-time winner of the PEN Literary Award for Children’s Literature. An adaptation of his 2014 poem “Negative Space” was nominated for Best Animated Short at this year’s Academy Awards, but the honor went to an unknown by the name of Kobe Bryant for his “Dear Basketball”. Ron’s delightful “Negative Space” will be screened as part of the Poetic Doubleheader.

The South Pasadena Public Library Community Room is located at 1115 El Centro Street. Doors will open at 6:30 p.m. and no tickets or reservations are necessary. Refreshments will be served and autographed books will be available for purchase.

Free parking is available in the South Pasadena Unified School District lot at 1020 El Centro Street (entrance from Fairview Avenue between El Centro and Mission) and after noon at the Mission Meridian Parking Garage located at 805 Meridian Avenue adjacent to the Metro Gold Line Station, only one block from the Library.