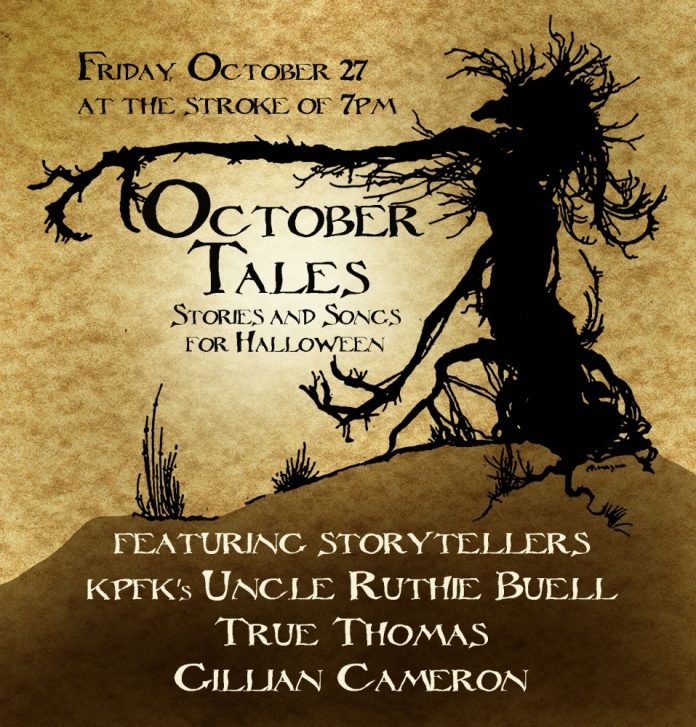 Flintridge Bookstore and Coffeehouse presents veteran storytellers “Uncle” Ruthie Buell, True Thomas, and Gillian Cameron in a concert of stories and songs for Halloween at the store on Friday, October 27 at 7:00pm. Each of these performers brings their own unique store of tales and songs to a performance which is suitable for all ages.

Singer, songwriter, educator, and poet Uncle Ruthie Buell is a Los Angeles icon, having hosted her children’s radio program Halfway Down the Stairs with Uncle Ruthie on KPFK for 57 years.

True Thomas the Storyteller, another Southern California fixture, has shared his stories and wealth of folklore, as well as his knowledge of the art of storytelling for decades and has performed and trained at schools, libraries, festivals, and conventions throughout the Southland.

Gillian Cameron, is an educator, writer, cartoonist, filmmaker, and storyteller who has been sharing folktales and ballads in Souther California and elsewhere for three decades. She is also the artist and writer of the weekly webcomic Calogrenant which can be seen at calogrenant.com.

Singer, writer, songwriter, storyteller, recording artist, radio producer and teacher both of music and in the field of special education, Ruthie Buell has been a poet since age eight. For many years she has worked primarily with blind children. She began her radio career in Chicago at age 12, and has been on the air as a radio producer with KPFK in Los Angeles since its beginning 57 years ago. She produces the nationally renowned “Halfway Down the Stairs,” her multi-cultural, nonsexist program of stories, songs and poetry for listeners of all ages. In 1996 Uncle Ruthie received the Rotary International Peace Ambassador Award, followed by the Children’s Music Network Magic Penny Award in 2010. In 2011her latest two-CD album, “The Jacaranda Tree,” won second place in the Parents’Choice Awards. Ruthie has recorded six albums, including the very adult “The Mystery of Time” and “Hanukkah at Home” for Rounder Records. She is a former long distance runner. She is particularly proud of the “Poet Tree” she maintains in her front yard, a Chinese elm, in a contemplative courtyard adjacent to the sidewalk, on which she both posts poetry and invites passersby to post.

True Thomas the Storyteller is well known for his wide repertoire (from multicultural traditional to sci-fi and fantasy) and his exciting style is for folks of all ages. His specialties include researching and creating unique storytelling personas who educate and tell stories, first person. When the Getty Museum wanted stories for their Illuminated Manuscripts exhibition, True packed the house. He’s kept audiences from executives to cops, and from patients to pre-schools, enthralled in storytelling magic. His personae include Celtic, Norse, Middle Eastern, Medieval, American West, SteamPunk, and so much more. He is considered one of the go-to people on Celtic and Fairy Folklore in Southern California. True is also a ULC Minister, and a Trained Emcee and Public Speaker, and offers a variety of Fun workshops.

There are many words that describe aspects of Gillian Cameron: teacher, artist,storyteller, parent… She also likes “mystic and magical being.” “Emanation of the Divine Feminine” sits pretty well with her as well. Gillian has performed as a storyteller at the WomanSpace Solstice festivals and libraries, schools, and festivals throughout Southern California. She has worked with True Thomas for many years, both as a performance duo and as trainers of storytellers. She recently starred, along with Alexa Hunter, in The Alexian Chronicles: an Alchemical Cabaret, a two woman show at Highways in Santa Monica. She has recently retired from a 36-year career as a high school English and film teacher, she sings interminable ballads, and she is the author and illustrator of Calogrenant, a web comic about the adventures of an Arthurian knight coming to terms with who she is, which can be seen weekly at calogrenant.com.