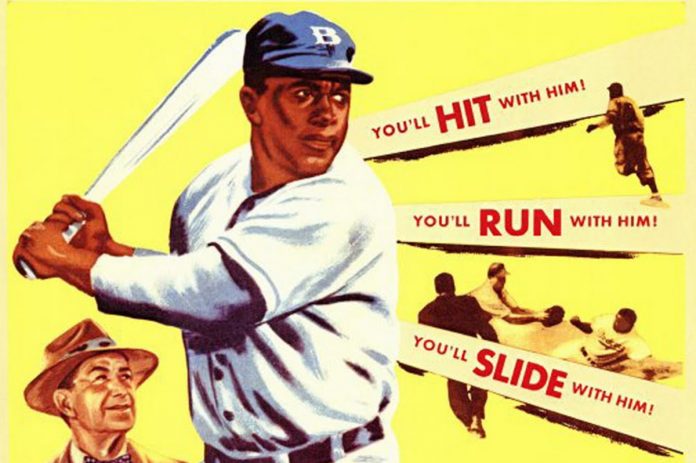 Jackie Robinson was born in Cairo, Georgia on January 31, 1919 and his family moved to Pasadena in 1920. As an outstanding four-sport star, Jackie attended Muir Technical High School and Pasadena Junior College. After his graduation, Robinson transferred to UCLA, becoming the school’s first student athlete to earn varsity letters in all four major sports.

In 1942, Robinson joined the Army in Fort Hood, Texas. Despite the racism he encountered, Robinson eventually triumphed over an unjust court martial hearing and was given an honorable discharge. He then spent a year as the Athletic Director at Sam Houston College before receiving offers to play professional baseball in the Negro Leagues. After earning All Star accolades, Brooklyn Dodgers President Branch Rickey broached the idea to him to play on the Dodgers minor leaguer team in Montreal where he earned the league’s Most Valuable Player honors.

Upon his call-up to the big club with the Brooklyn Dodgers in 1947, Jackie Robinson broke the color barrier in Major League Baseball . With his tremendous courage, outstanding play, and dedicated work for social change, he changed the consciousness of an entire nation. During his ten seasons, he was the first African-American to win a batting title. He was also the first black to be named a league MVP and he led the Dodgers to 6 pennants and a World Series title. Jackie Robinson was also the first Black player elected to the Hall of Fame and his number 42 is the only one permanently retired in all of Major League Baseball.

Jackie Robinson worked tirelessly as a leader in the Civil Rights Movement and none other than Martin Luther King, Jr. called him a legend and a symbol in his own time. Rivaling only Babe Ruth as the most historically significant baseball player ever, Jackie Robinson is considered by many to be the most important figure in American sports history.

“The Jackie Robinson Story” was initially released to theatres in 1953 during the era of racial segregation but was nonetheless accorded critical praise and strong box office receipts. It featured an outstanding performance by Ruby Dee as Jackie’s wife, Rachel Robinson. Although not a professional actor, Jackie Robinson’s potentially difficult portrayal of himself also earned high praises for its confident assuredness and restraint. And as might be expected, the re-enacted baseball scenes are outstanding –and in many ways they are superior to those in “42”, the 2013 Jackie Robinson motion picture starring Chadwick Bozeman.

Introductions to the film will be made by Mark Langill, Official Historian of the Los Angeles Dodgers, and Alex Boekelheide, Executive Director of Strategic Communications and Marketing, Pasadena City College.

The South Pasadena Public Library Community Room is located at 1115 El Centro Street. Doors will open at 6:30 p.m. no tickets or reservations are necessary, and refreshments will be served. Special surprises are planned as well. Thanks to the Los Angeles Dodgers, Pasadena City College, 210eastsound, Videotheque, The Rose, and Movie Licensing USA. For more information, please call the South Pasadena Public Library at 626 403-7350.

Free parking is available after noon at the Mission Meridian Parking Garage located at 805 Meridian Avenue adjacent to the Metro Gold Line Station, only one block from the Library. Upon request made no later than four (4) business days before the event, the City will provide a reasonable accommodation for a qualified person with a disability to have equal access to the event. Please contact ADA Coordinator and Human Resources Manager, Mariam Lee Ko, at (626) 403-7312 or fill out the City’s request form available at www.southpasadenaca.gov and email the form to Human Resources at [email protected]